Martial law in Baltimore and arrests in NYC and DC

BREAKING: Arrests made as hundreds in NYC, DC rally for Baltimore’s Freddie Gray

New York City police have started arresting people marching in solidarity with protesters in Baltimore, where demonstrations and riots were sparked by Freddie Gray’s death in police custody.

The arrests come after hundreds of people gathered in New York's Union Square to rally against Gray's death and in support of those in Baltimore. The NYPD had warned participants that marching into the streets or blocking sidewalks could result in arrests.

The arrests come after hundreds of people gathered in New York's Union Square to rally against Gray's death and in support of those in Baltimore. The NYPD had warned participants that marching into the streets or blocking sidewalks could result in arrests. 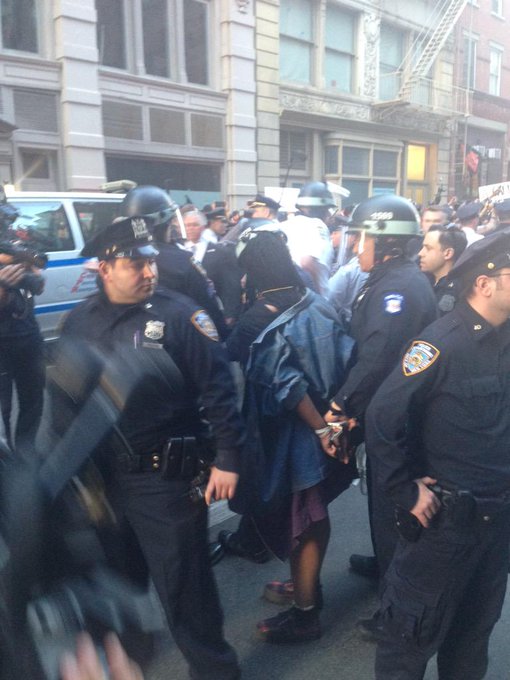 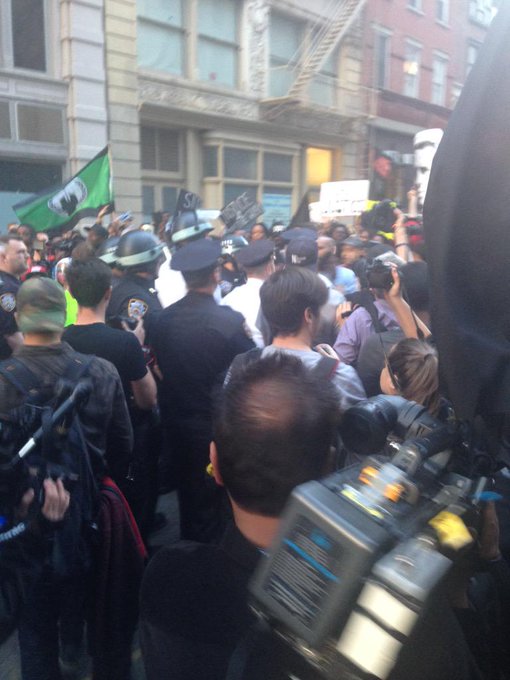 Police are charging protesters with disorderly conduct, according to CNN.


It's unclear exactly how many have been arrested, but the Associated Press is reporting that at least 12 people have been detained. 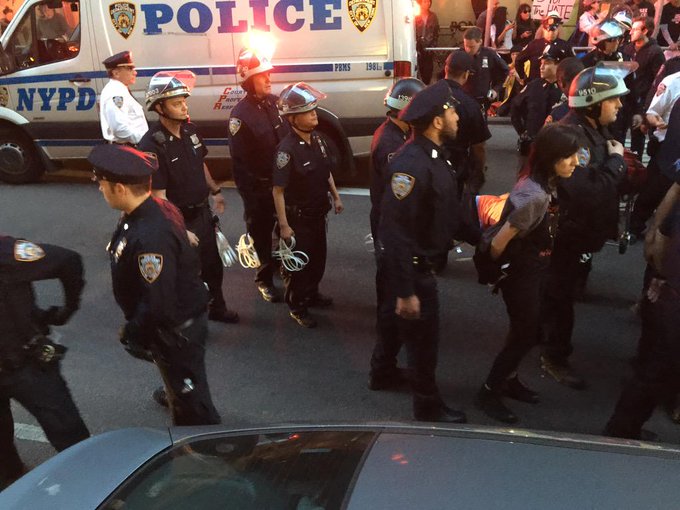 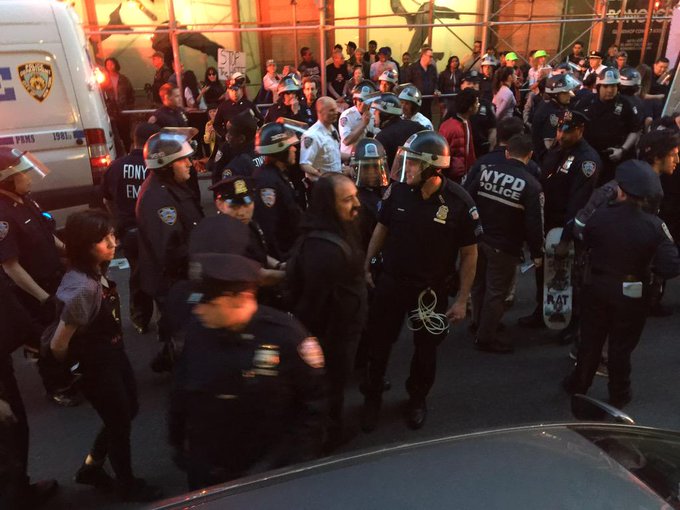 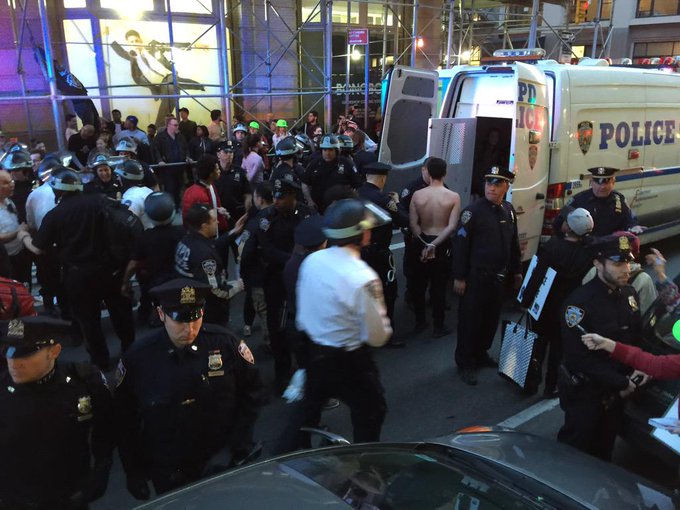 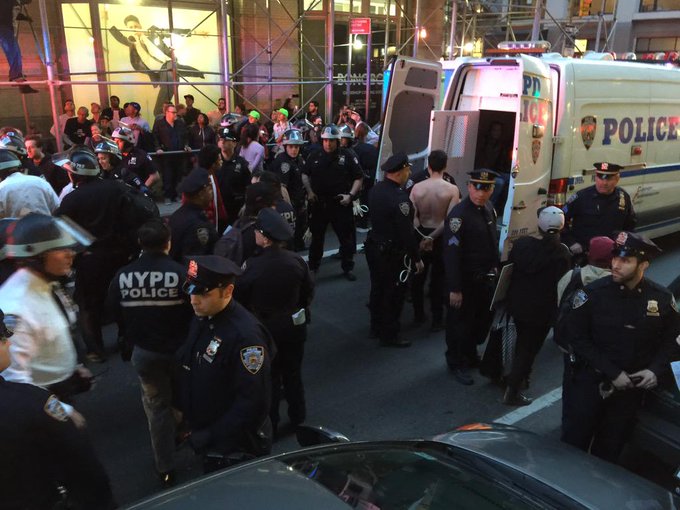 The event was organized by the Millions March coalition, which asked participants who support“social, economic, and racial justice” to head down to Union Square to “stand in solidarity with them and with their resistance because their resistance is for justice and their justice is our justice.” 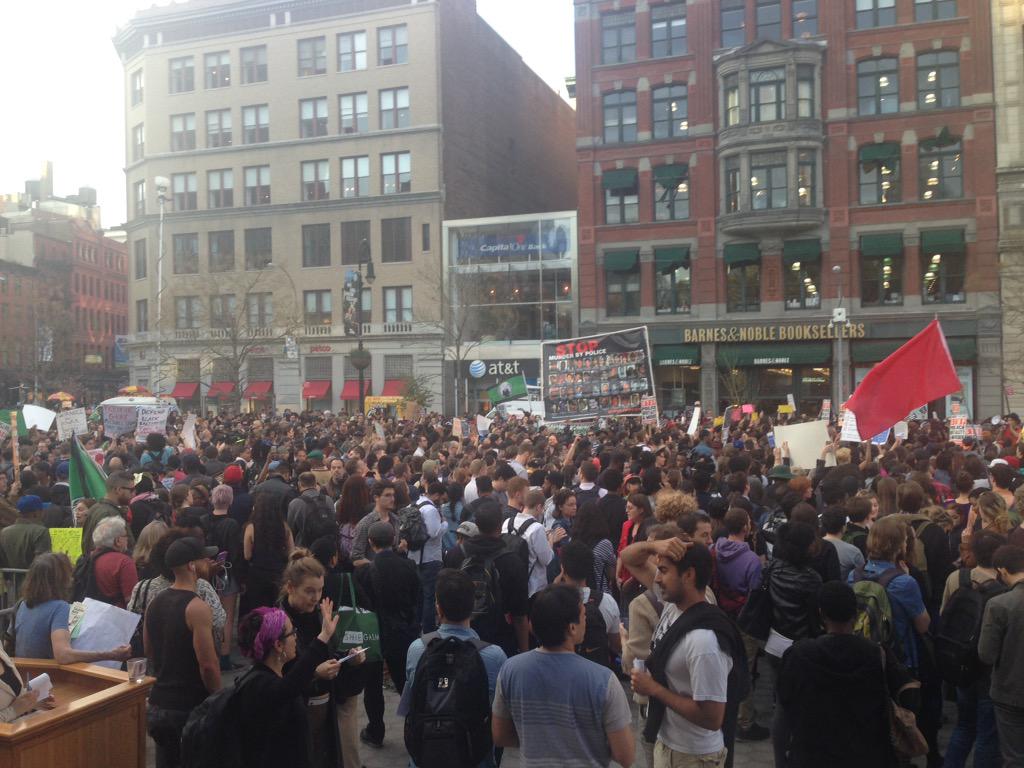 “People of Baltimore have taken to the streets day after day for justice for Freddie Gray and for Black lives across the country but now that the National Guard has been called in and a curfew set, we must stand in solidarity with the people of Baltimore,” the group wrote on the Facebook page for Wednesday’s event.

“The media will continue to paint the people of Baltimore as rioters and looters but people forget that the City and Police of Baltimore loot and destroy Black and Brown communities of Baltimore every day of the year.” 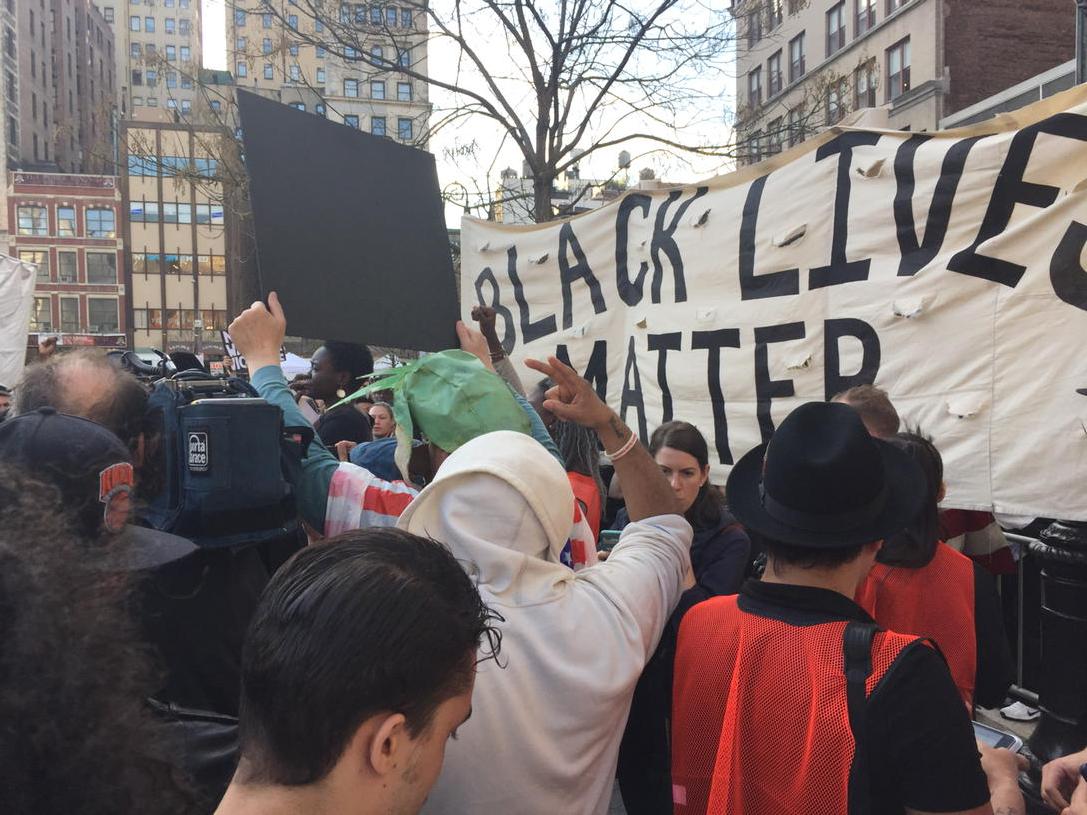 Hundreds of protesters showed up to Union Square to begin the rally.

Prior to the rally's commencement, police used loudspeakers and distributed flyers warning demonstrators that they could be arrested if they walk in the streets or block the sidewalks.
In Washington, DC, the National Black United Front scheduled its own rally in support of Gray and “all those that have been killed by at the hands of police terrorism.”

Speaking with the Washington Post, one local activist described the motivation behind the event.
“We wanted to come out and show our solidarity with folks who are protesting for Freddie Gray in Baltimore and continue to bring national attention to this, and not allow for this, like any incident, to be treated as isolated to one city,” said Eugene Puryear.

Several hundred people turned out, where protesters were set to march to the White House. Gray was a 25-year-old American who died in police custody as a result of a severe spinal cord injury. It’s unclear how Gray sustained the injuries, though police have said that timely medical care was not given and that the young man was not secured by a seatbelt when placed in the back of a police wagon.
Federal and local investigations are ongoing, but protesters have taken over Baltimore streets nightly for the past week or so. The majority of the rallies were peaceful, but rioting and looting on Monday pushed the mayor to implement a weeklong curfew and for the Maryland governor to declare a state of emergency. 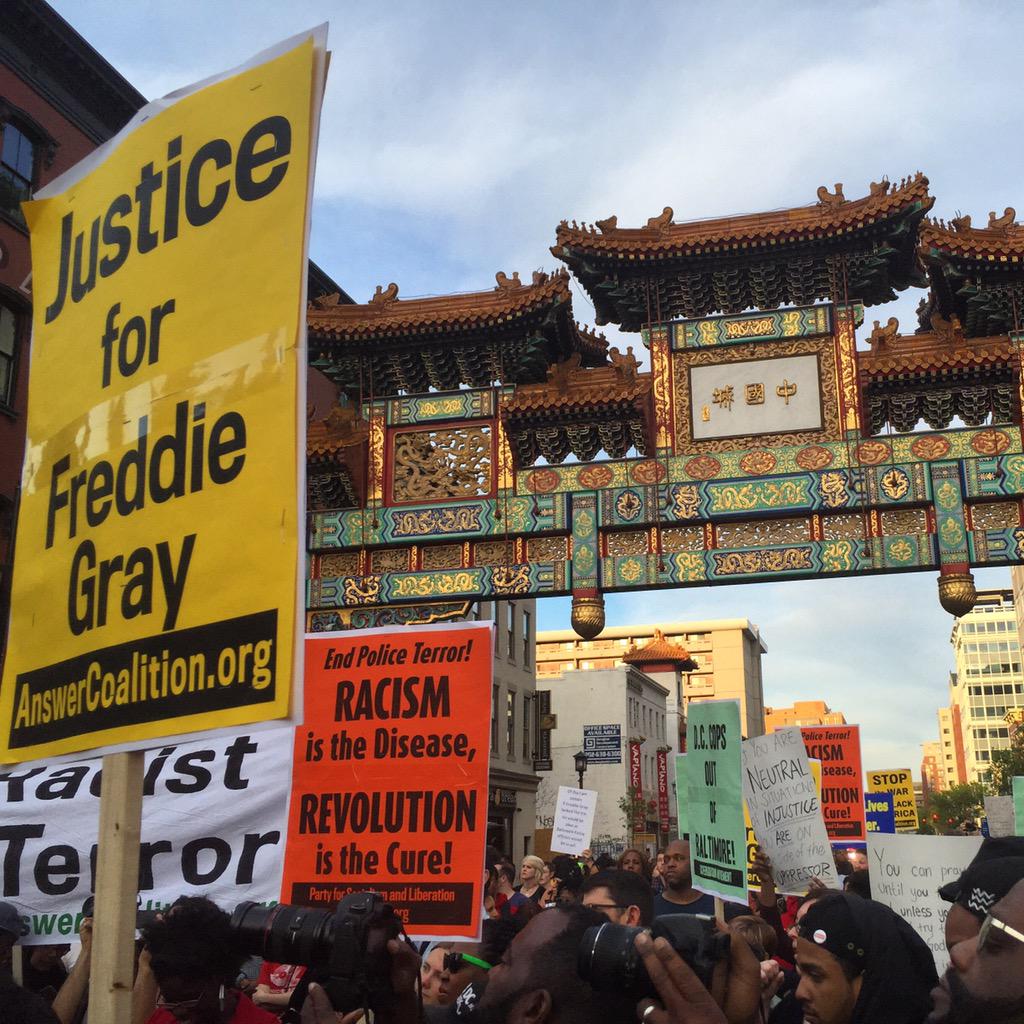 Baltimore Uprising: State Halts Civil Rights Protections for Those Arrested
As Baltimore picks up the pieces from the last few days of protests and riots, a new day brings new aspects to light, and a city that remained relatively calm on Tuesday night is still bracing itself for the possibility of more violence. Not helping matters, Baltimore police have imposed expensive bonds on its poorest residents. 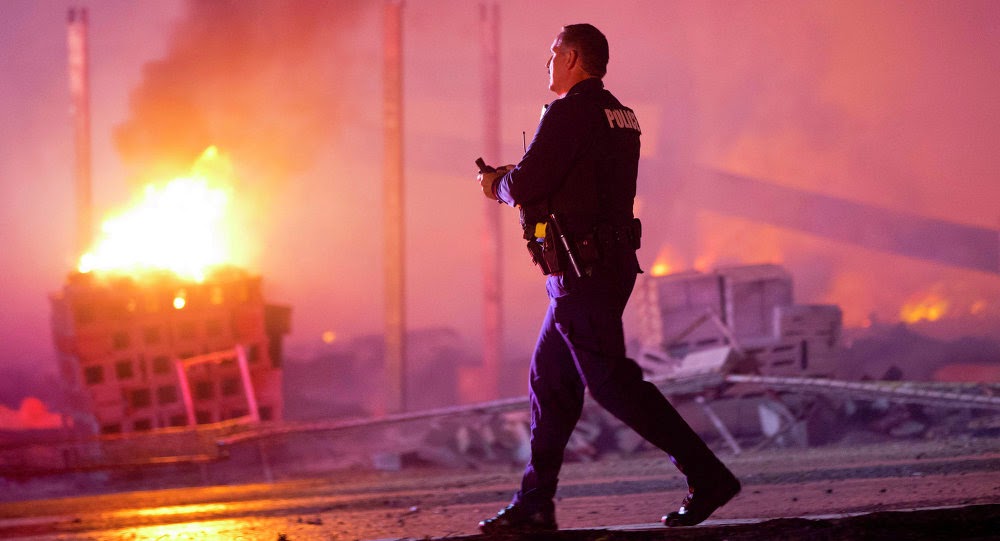 The city’s police clarified Wednesday that their report on the details of the death of unarmed 25-year-old Freddie Gray in police custody would not be released on Friday as many expected, adding to mounting frustrations among the city’s residents that information about the murky incident is not forthcoming from authorities.

Matthew Young @chesswiz77
@CassandraRules Police should act accordingly and be as gentle as possible. Last thing we should be rooting for is #BaltimoreOnFire

Cassandra @CassandraRules
I'm not rooting for Baltimore on fire, but this scares me more tbh. @chesswiz77 pic.twitter.com/W5kHLn7Bam 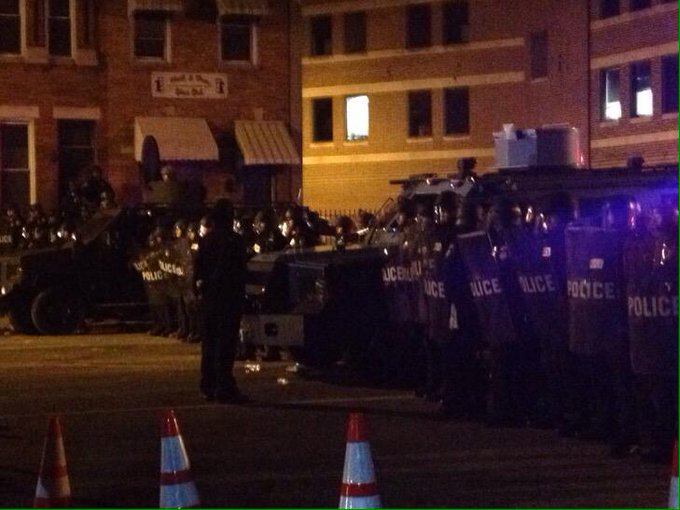 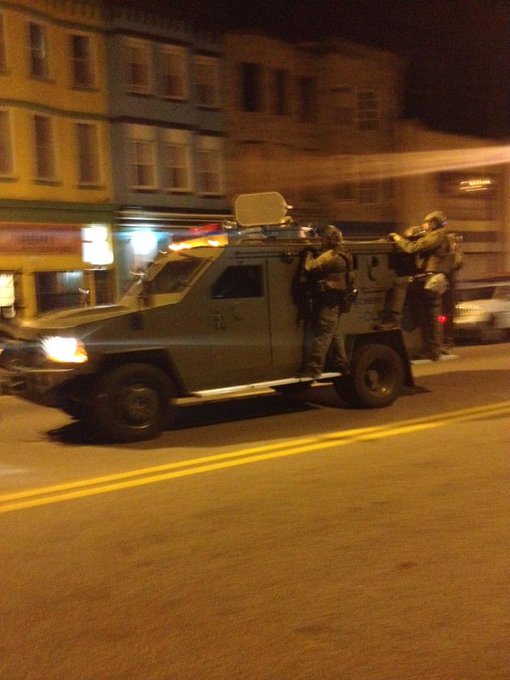 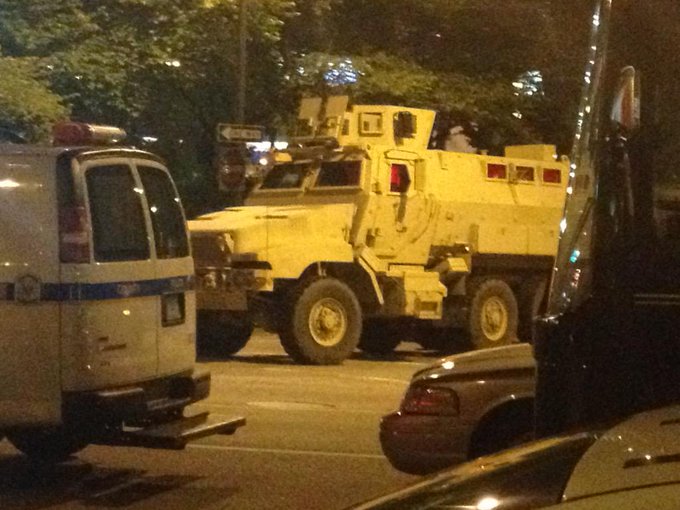 The lead-up to the events in Baltimore over the last few nights is, at best, complicated. Gray’s death ignited pent-up frustrations about the way minorities are treated by US law enforcement. It’s hard to condone the violence, but it’s necessary to understand where it comes from: a sordid history of systemic prejudice, wherein black youths are inherently viewed as threatening, while white youths rioting after a soccer game are seen, simply, as rambunctious.

Mass riots rarely happen in a vacuum, after all. Something lights the tinderbox.

Thousands of Troops Patrol Baltimore as Citywide Curfew Comes Into Effect
If a history of injustice can be partly – if not mostly – blamed for the riots, then Baltimore’s reaction to the demonstrations can also play a major role in whether the last outburst was the one that breaks the cyclical nature of inequality.

So far, Baltimore police may be off to a bad start. In an effort to crackdown on individuals which Baltimore Mayor Rawlings-Blake called "thugs," the state’s governor, Larry Hogan, has put some fairly draconian measures in place.

Taxing the Poor to Protect the Rich

Over the last two days, Baltimore police have arrested hundreds. While 35 were taken into custody Tuesday night after the city’s week-long 10 pm curfew went into effect, 235 were arrested during Monday’s riots.

According to the Guardian, most of those individuals are being held without charge. While Maryland’s habeas corpus law allows for 24-hour detention without charge, Governor Hogan has suspended that safeguard, claiming it was "necessary to protect the public safety."

Baltimore Police
✔@BaltimorePolice
There is no protest activity at this time in Baltimore. We continue to hope for peace. #OneBaltimore

Suspending laws meant to protect the citizenry against the dangers of a police-state is hardly the way to prevent chaos that was originally inspired by those same fears of law enforcement overreach.

Katie D’Adamo, a lawyer with the Office of the Public Defender, confirmed to BuzzFeed News that most of the adults arrested on Monday are being held in tiny cells.

Baltimore City Police Captain Eric Kowalcyzk also said as much during a Wednesday news conference, saying that 111 people have yet to be charged with a crime, though he also said that many of those may be released for the time being to be charged at a later date.

"While we may be in a state of crisis, what we do now, under the American system of justice, people who were arrested and have not been arraigned, have not been charged, are in fact innocent," said Cornell William Brooks, president of the NAACP. "The fact that we have 200 people who are sitting in legal limbo is concerning." A man stands in front of a line of police officers in riot gear as part of a community effort to disperse the crowd ahead of a 10 p.m. curfew in the wake of Monday's riots following the funeral for Freddie Gray, Tuesday, April 28, 2015, in Baltimore.

One 19-year-old, for example, was charged with eight offenses relating to his participation in demonstrations on Saturday. His bail was set at $500,000, a high price to place on an already disenfranchised population. The 19-year-old was arrested after he was unable to pay.

A City Holds Its Breath

The likelihood of escalations during Wednesday demonstrations is still anybody’s guess. But after Monday’s riots and skirmishes following the curfew on Tuesday night, police and city officials aren’t taking any chances.

In an effort to curtail unnecessary crowds in the downtown area, the Baltimore Orioles have taken steps of their own. In a first for major league baseball, the Orioles played their game against the Chicago White Sox to an empty stadium.

In the past, MLB games that coincided with riots were postponed to a later date. This was the first to be played to a crowd of zero, with the Orioles winning with a score of 8-2.

"It’s a very tight schedule and…when you know you’re going to have other conflicts like weather and unavoidable situations comes up, you try to avoid it," league historian John Thorn told ABC News.

Though unprecedented, fans could still watch the game for free on league’s website, and the decision will keep 30,000 people off the streets of the Inner Harbor.

"After conversations with the Orioles and local officials, we believe that these decisions are in the best interests of fan safety and the deployment of City resources," league commissioner Rob Manfred said in statement.
Peaceful protests have continued throughout the day, as they have in days past since the death of Freddie Gray. Organizers hope that is how they will remain.