If you do nothing else today listen to this interview with Robert Marston Fanney. aka Robertscribbler.

Here are some comments from Kevin Hester, just returned home from his trip to Nepal.. I look forward to his report on this:

"After following his amazing blog for a long time we finally get to hear the voice of Robert Fanney otherwise known as Robertscribbler.

"For anyone who doesn't know his blog I highly recommend following it and his analysis.

"In the last year or so I have noticed the tone of his writing becoming increasingly more strident and at the beginning of this show he describes our predicament as terrifying. Few if any have the analysis of Robertscribbler and he has amazing access to up to date data.

"More confirmation from him on the El Nino and the temperature spike it is likely to generate.

"We've all been following the Californian and Brazilian droughts now we hear about the same issue in Chile. There is no good news except that we have been informed.

"Robertscribbler doesn't shy away from the dreaded M word and Dr Natalia Shakova gets a well deserved mention.

"id anyone notice that we never heard results of the data from the Swerus-C3, an international research expedition to the East Siberian Sea I find that pretty sus".

What is really going on? What are the big stories the media leaves out, while they fill the news with quirky headlines and fluff? All over the world, from pole to pole, the Earth and her species are going through big changes. The atmosphere is trapping heat into the oceans, air, and land.

This week I'm going to cover five of those big stories, with the help of one of the world's best risk watchers. He's author Robert Marston Fanney, and his launching pad is called Robert Scribbler's Blog.

At the end, we'll squeeze in a few words about the new oil poverty creeping into our lives, with a recent talk by former financial advisor and Oil Drum editor Nate Hagens.

We know humans and all species are about to live through a huge change not seen on this planet for over a million years. We have no memory of this planetary shift. No one has experienced it. The first stages are already happening.

As a science fiction author of Luthiel's Song and other works, Robert Marston Fanney has the imagination and ability to communicate. As a former specialist on emerging threats for the prestigious military publisher Jane's Information Group, he's learned how to research and pry into things. All of that, plus a special something else that is hard to define, leads to one of the most stimulating climate change blogs on the Net. It's called Robert Scribbler's Blog.

Robert Marston Fanney
Here's the catalog of recent blog posts we cover, or uncover:
* world-changing ocean currents
* cracks in the ice castle of Antarctica
* drought and fires in South America
* methane and blown craters in the Arctic
* the coming heat

In an interview on KPFA radio Robert Fanney said North Atlantic current news should be a major story in the mainstream media, every night. It's not. If we went down the street asking about it, we won't find much comprehension. What makes a major driver of our weather, and civilization as we know it, so boring, so off the radar?

That KPFA radio interview with host Caroline Casey can be found here.
Here is Robert's blog on why we should worry about big climate-driven changes in ocean currents.

I interview scientists about Antarctica, but they are often very, very cautious. In a way, science can only study the past, and barely captures the present. The future seems beyond it. What do these developments in Antarctica really mean?

I've just read a couple of papers about sea level rise expected from the melting of Antarctic ice. Some scientists suggest we might see about 1 meter of global sea level rise from Antarctica by the end of this century.

James Lovelock famously said humans might end up as a few breeding pairs huddled around a tropical Arctic ocean. It seems inevitable to me, that if we survive, humans a thousand years from now may be settled on Antarctica, as that continent is revealed by global warming.

Check out Robert's most recent blog on Antarctica. And here is my feature interview on Antarctica with scientist Roland Warner from a few weeks ago on Radio Ecoshock.

SOUTH AMERICA - DROUGHTS AND A MAJOR CITY OUT OF WATER

Robert Maston Fanney, you've been one of the few bloggers who really pays attention to South America. I wonder if some of the climate disruption going on in Chile, Argentina, and Brazil may be related to changes in relatively nearby Antarctica. We know that changes in the Arctic have affected the Jet Stream, and weather in the Northern Hemisphere.

Let's get to what we do know for sure. Last Fall Robert raised the alarm about drinking water in one of South America's biggest cities, Sao Paulo. How many people live there, and what is happening now? I can imagine the non-stop media attention if water in New York was cut off for hours or days. Yet we hardly hear about Sao Paulo. Why?

We can definitely tie the drought in Brazil to deforestation or other changes in the Amazon rainforest. The Amazon was the constant rainmaker for Souther America, and now it's smaller and not as potent. This even affects cloud formation and rain in North Africa.

There's also been dry times, and an extended fire season in Chile. Robert just reported on that in Robert Scribbler's blog.

Let's head to the other end of the Earth, the Arctic. There is a school of people who think methane eruptions from the Arctic sea bed could wipe out the human species in this century. Are you part of that crowd?

Right now, it is carbon emissions, coming from cities where we live, that is endangering the future of civilization and helping the on-going mass extinction of species. We'd like to put it far away, in the Arctic, but it's us, here in the "civilized" sub-tropics.

There are some strange signs in the far north. Robert tells us about dozens of craters that have appeared in Russia. They are likely methane explosions. 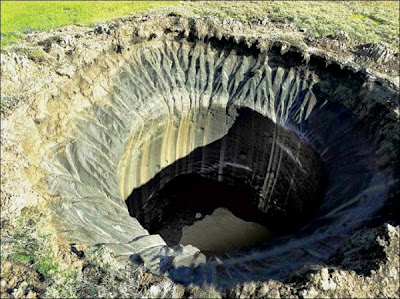 (The Yamal Crater, as seen above, would be miniscule compared to a Yakutia Crater reported by Russian Scientists yesterday. Image source: The Siberian Times via Vasily Bogoyavlensky.)

We talked earlier about the power of ocean currents. What is happening withwarm waters entering the Arctic Ocean around Alaska, via the Barents Sea?

IS A FASTER WARMING COMING?

Let's talk about something that worries me. I keep hearing new science that suggests we may be entering a new warming phase. Things have been delayed, and now the heat is coming, this decade or the next. Here is Robert's blog on the prospect of heating: "Bad Climate Outcomes".

Let's say we get a warming event, in a single year, or over three years. What do you imagine that would look like?

Again, ocean currents may be a factor. The Pacific Decadal Oscillation, a cycle of warmer or cooler surface waters in the Eastern Pacific - could that play into a heating event. It may have artificially cooled us (or minimized the warming we are due for) these past few years. When that changes to El Nino, we may be a burst of heat, as the planet did in 1998. But with added global warming gases, each heating event could be hotter than the last. Always setting records.

In a way, I think some climate hawks would like to see a really visible heat wave. At least that might galvanize the world and it's leaders into action. Could it be a good thing in a way?

On the side of pessimism, we may just get a slow, slow ramping up of warming, where we don't get enough impulse to react. It's the boiling frog effect. (That's not true by the way. Frogs will jump out of boiling water, even if we don't as a civilization.)

Robert Scribbler's blog has turned into a monster. It's become really popular with those in the know, kind of a thought-leader thing. I also appreciate the community of informed commenters that have built up around it.

From Washington Grove Maryland, we've been talking with science fiction author, emerging threats specialist, and climate blogger extraordinaire, Robert Marston Fanney. In literature, he's best known for the science fiction seires called Luthiel's Song. Find out more about Luthiels's song on Facebook. His previous Radio Ecoshock interview titled "I Have A Confession to Make" continues to be downloaded by people all over the world.

Check out Robert's blog for new postings on the rampant fires in Siberia (way to early in the season for that!)(he calls it "Siberia's Road to Permaburn Hell") and his update on the terrible drought in California.

In the little time we have left, I'm going to give you a taster of a simple but important talk by former Oil Drum editor, financial advisor and academic Nate Hagens. This is from my recording at the launch of the World Watch Institute State of the World 2015 Report, on April 13, 2015 in Washington D.C.

This is where Nate Hagens explains -through the lens of energy - why real growth ended in the 1970's for most people in Western countries. Since then, as the cost of getting energy goes up, more poverty is created. At this point, about 40% of Americans are pretty well broke, and 52% don't have enough savings to survive 3 months out of work. GDP may go up, but real wealth is declining, - a fact that is hidden by ever increasing debt.

I invite you to listen to Nate Hagens' full 25 minute talk at the World Watch Institute. You can download it as a free mp3 here.

Get all the details, with some video, and the full World Watch report, at www.worldwatch.org.
Posted by seemorerocks at 10:50