The Guardian,like all media is trying to paint this as 'normal' weather for April, which is 'normally' wetter than other months 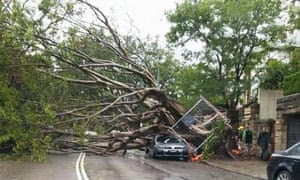 
From the Sydney Morning Herald


This shocking weather is a warning to us all ... from 'up there'

Wild storms have lashed the New South Wales coast, with floods and gales wreaking havoc. About 180,000 homes were left without power, while an elderly woman is in a critical condition after being rescued from floodwaters.

The woman is understood to have suffered a cardiac arrest and was transported to hospital. Along with her partner she was among about 20 people from Stroud, north of Newcastle, who have been rescued from floodwaters, with 10 of them airlifted from rooftops.

State emergency service deputy commissioner Steve Pearce said, “we have other rescues on at the moment and in some of those situations we hold grave concerns for those persons.”

Dozens of people were stranded, but safe, in the showground at Stroud. A school bus was also swept off the road, but there were no children on board and the driver has since been winched to safety, according to 2GB.

“It’s basically like a flood island,” Pearce said. “They’re safe but we just can’t get access to them due to no light and also the ferocious winds.”

Reports were coming in from various locations of homes with their roofs torn off. Pearce said people should stay at home.

“The roads are far too dangerous. Flash flooding is everywhere throughout the Sydney metropolitan and surrounding areas,” he said.

“We have multiple people being caught in the floodwaters. Please do not attempt to walk, ride or drive through floodwater.”

The cruise ship Carnival Spirit remains trapped outside Sydney Heads because of a massive swell, and may be there for the next 48 hours. Passengers were due to disembark from the ship on Tuesday morning but the large swell has prevented the ship from entering the harbour.

“The Sydney harbourmaster has closed the port of Sydney and Botany, possibly for the next 48 hours,” a spokesman from the NSW port authority said.

A passenger from Sydney aboard Carnival Spirit said the waves on the coast were massive. “It’s not pleasant, it’s been like this all night,” she told ABC radio over the phone. “I don’t think many people got much sleep.”

Dangerous surf conditions closed down several beaches across Sydney and the rest of the NSW coast, including at Bondi.

Sydney ferries have also been affected by the wild weather. The Manly to Circular Quay service has been suspended due to adverse weather conditions, according to a Sydney Ferries spokeswoman.

Ferries on the Parramatta river are also starting and terminating at Meadowbank due to severe tides at Rydalmere and overflowing at Parramatta Weir.

The University of Newcastle has been closed with students and staff being told to stay away from the university’s Callaghan, Newcastle City and Ourimbah campuses. Live-in students have been put on stand-by and told to register with the university via SMS.

The State Emergency Service had responded to more than 3,000 calls for help, and completed 19 flood rescues by 8am, with most requests coming from the greater Sydney region.

Many of the jobs were due to roof damage, including half a roof blown off a Cessnock City unit and a tree that went through the roof of a nursing home in Wyong.

“We have hundreds and hundreds of volunteers out in the field and we are calling in more from other parts of Sydney and now up onto the Hunter area,” Pearce told the ABC.

Pearce said the police and NSW Fire and Rescue had been called in to help the SES, with many more calls expected as the morning went on.

Authorities were warning people in Sydney, the central coast and Hunter regions to beware of downed power lines, saying storm debris could be hiding live lines.

At least one person was rescued from floodwaters at Parramatta, while others were pulled out of stranded cars in other parts of the state.

“These jobs are a reminder to never drive, ride or walk through floodwater,” said an SES spokeswoman, Stephanie Wills.

The Bureau of Meteorology said the weather was the result of an intense, slow-moving low pressure system near where the Hunter and Mid North Coast regions meet. The system was expected to move gradually south throughout Tuesday.

More than 300mm of rain has fallen on some of the affected areas in the past 24 hours. Destructive winds of 90 to 100 kmh, with gusts to 135 kmh, were forecast for coastal parts of the Hunter district, including the central coast.

Less strong but still damaging winds were expected along the coastal fringe of the Metropolitan, Mid North Coast and Illawarra districts.

Heavy rain was also expected in the Hunter and elsewhere, and there was a warning out for very heavy surf.

The storms were expected to pummel parts of NSW throughout the day, giving crews little chance of a proper cleanup effort. Ausgrid said many homes and businesses would be without power throughout the day and into Wednesday.

There was a danger of flooding in the Manning, Karuah, Hunter, Wyong and Lower Hawkesbury valleys, as well as Lake Macquarie and the Paterson and Williams rivers.

Get the latest updates in the Guardian's  NSW storm live blog

Video: home washed away by floods

Extraordinary scenes purportedly from Dungog, north of Newcastle: a home literally pulled from its foundations by floodwaters. About 312mm of rain have fallen in the town in the past 24 hours.