This is an earlier report before the sale of casualties became known,  but has photos.

Nepal is in our thoughts and prayers right now after yesterday’s earthquake.

An earthquake measuring 7.9 magnitude struck 80 km (50 miles) east of Pokhara in Nepal on Saturday, about half way between the town and the capital Kathmandu, the US Geological Survey said, and witnesses said some buildings in Kathmandu had collapsed.

There was no immediate word on casualties. The quake was 31 km (19 miles) deep.

Tremors were also felt in north and east India. The tremors were felt in most cities, including Delhi, Guwahati, Patna, Ranchi, Kolkata and Jaipur. Rescuers help injured residents to get to safe area. (Reuters) An injured man receives treatment outside the Medicare Hospital in Kathmandu. (AP Photo) A house collapsed in Siliguri after the earthquake. (Bikram Shashanker/ HT Photo) A girl breaks down in Lucknow after the earthquake. (Deepak Gupta/ HT Photo) 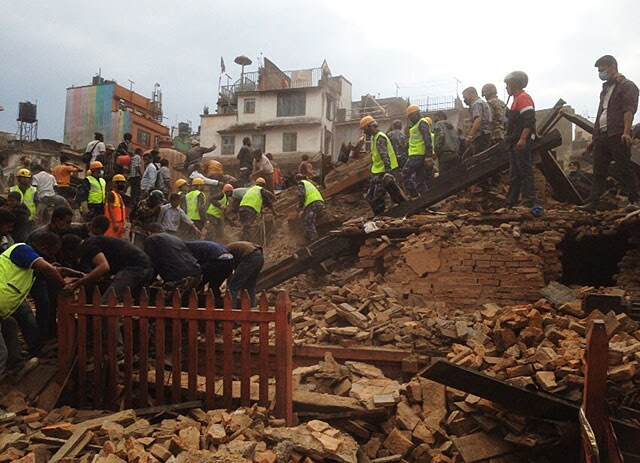 Rescuers clear the debris at Durbar Sqaure after the earthquake in Kathmandu.(AP Photo) 7.9-magnitude earthquake struck east of Pokhara in Nepal, causing widespread damage to buildings in the capital Kathmandu and injuring dozens across the country. (Utpal Parashar/HT Photo) The epicentre of the massive quake was 80km (50 miles) east of Pokhara in Nepal, about half way between the town and the capital Kathmandu, the US Geological Survey said. (Photo credit- @iHunnt on Twitter) The quake was followed by at least four aftershocks ranging in magnitude from 6.6 to 4.8, the USGS said. (Utpal Parashar/HT Photo) Injured peopel are being rushed for treatment in Nepal.  (Photo credit- @gunaraj on Twitter) People vacate offices after tremors were felt in Kolkata. (Photo by @Itsanindita on Twitter) In this photo released by China's Xinhua News Agency, a collapsed building is seen in Nepal's capital Kathmandu. (AP Photo) People gather near a building that collapsed after an earthquake in Kathmandu, Nepal. (Photo by Special Arrangement) Damage caused by the earthquake at Durbar Square in Kathmandu, Nepal. (AP Photo) Rescue members move the body of a victim from the collapsed Darahara Tower in Kathmandu. (AFP Photo)

Posted by seemorerocks at 07:39