I didn't feel a thing here in Wellington 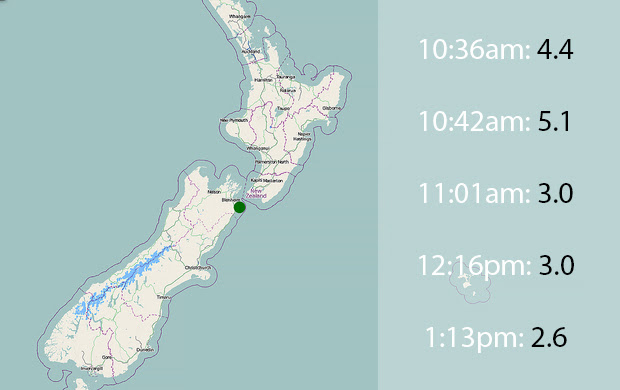 A map provided by GeoNet shows the location of the earthquake

GeoNet initially reported a 5.2 magnitude quake, centred 25 kilometres east of Seddon in Marlborough at a depth of 24 kilometres. It hit at about 10.42am.
It has now revised the magnitude down to 5.1.

A smaller earthquake hit slightly earlier, recorded at a magnitude of 4.4 and centred 30 kilometres east of Seddon at a depth of 20 kilometres.

There were also reports of a third earthquake, shortly after midday today.

'It took us by surprise'

A plate tectonics researcher said today's earthquakes in Marlborough are a reminder for people to be ready.

Victoria University's professor of geophysics, Martha Savage, said the quakes were probably related to the 6.6 earthquake that struck Seddon in 2013, as tectonic plates take a long time to settle.

Ms Savage said residents should not be too concerned, however, as there is only a one in one hundred change today's shake will lead to a larger one.

Another resident, Len Gibson, said it was nothing like the 6.6 earthquake that struck Seddon in 2013, the largest of a series of shakes that caused considerable damage.

Nelson resident Ally Hossain said it took a while for her to realise what was happening - and before she had time to react, it was over.

Ms Hossain, who was on the fourth floor of her Nelson office at the time, said she only felt it because she was sitting down.

"It just took us by surprise, a little bit. We at first didn't realise what was happening but one of my colleagues just said, 'Is that an earthquake?'

"I could feel my desk move and could see the blinds in our office building - I'm on the fourth floor - starting to move as well. It only lasted for probably about five, six seconds."

St John spokesperson Ian Henderson said the service has had no reports of injury or damage as a result of the earthquakes.

In its blog, GeoNet said no structural damage was expected but a few reports indicated that items may have fallen from shelves.

Trains in Wellington came to a halt for 20 minutes due to the earthquakes. The network has now been given the all-clear and services have resumed but Tranz Metro said delays could be expected. 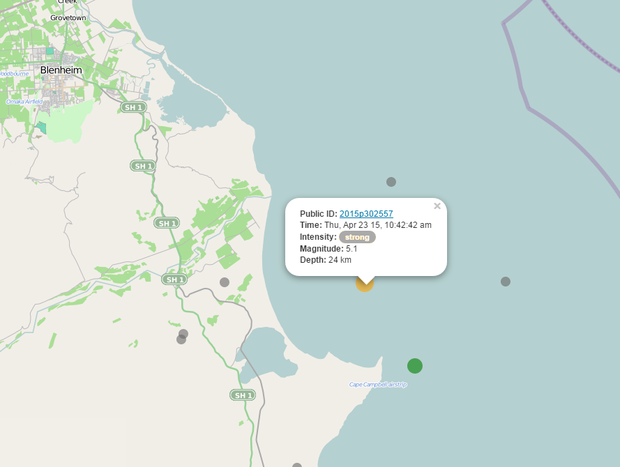 The epicentre of the first earthquake is shown in green; the second is shown in orange. Photo: GEONET

Ms Page said about 2500 people had reported feeling the quakes on the service's website.

She said it paid to be prepared for earthquakes and people should have an emergency kit.