One might hope that the climate change denying and racist heartland of Australia might see sense. I won’t be holding my breath

'Tiny hearts' and 'balls of steel'. Is this really what the world thinks of Australia?
Katie Hopkins has held Australia up to the world as some kind of racist role model for our violent treatment of asylum seekers. And why wouldn’t she? 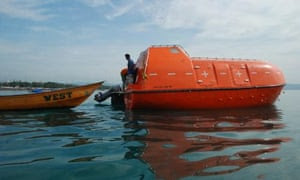 Australians have “tiny hearts and whacking great gunships”. We “threaten [migrant boats] with violence until they bugger off”. And British people should be more like us.

That’s Katie Hopkins’ view, at least. Her column for the Sun on Saturday about asylum seekers leaving North Africa, crossing the Mediterranean by boat and arriving in the EU was full of this candid language, the sort of thing you might expect to hear outside a pub just after closing time.

Hopkins, who first came to public attention on the reality TV show The Apprentice, calls asylum seekers “vermin” and “a virus”. In her view, “These migrants are like cockroaches”. Some of them eventually get to Britain – a place Hopkins wishes to keep free of boat arrivals – which should prompt the UK to “get Australian”.

Perhaps there are a few people in Australia who would share this opinion, and would rather see people die than reach our shores. As an Australian, I prefer to think that people who genuinely share Hopkins’ view of things are a tiny minority.

That’s because I believe most Australians are decent people who genuinely believe in a fair go for everyone. So it comes as a shock to see Hopkins invoking Australia’s approach to asylum seekers as an example of best practice.

While her view of Australians is deeply offensive, it has to be said that it is a view increasingly held of us by others. Overseas, we are seen as cruel and selfish, which in Hopkins’ view corresponds to “balls of steel [and] can-do brains”.

She goes on to say, “Migrant boats have halved in number since Australian Prime Minister Tony Abbott got tough.” The Australian government, for its part, insists that boat arrivals on our northern border have, effectively, stopped.

Let’s assume that is true. Two questions remain: what is the value of stopping boat arrivals? And what is the cost?

Initially, the Abbott government’s justification for its hardline policy on asylum seekers arriving by boat, dubbed Operation Sovereign Borders, was that it would save lives. There is no evidence to support that idea. Of course, it is tragic when asylum seekers die in a desperate attempt to reach protection. It is also tragic when they stay behind and are slaughtered.

The key difference is that when they stay behind and become another statistic in the grim arithmetic of ethnic cleansing, we do not empathise with them; our conscience remains untouched. When we learn that they have perished in an attempt to seek safety in our country, it seems different.

Nor have the boats stopped setting out. They have just been turned back by the Australian Navy, which has even breached Indonesian territorial waters in the enterprise.

And the public is not allowed to know how many people have perished in their thwarted attempt to get here, because that is an “operational matter” that has become a state secret.

Second question: is it a benefit to reduce the number of asylum seekers who get to Australia?

It is worth knowing that the average number of asylum seekers who have arrived here by boat in the past was about 2,000 per year. The highest number over the past few decades is 25,000 in one year. Not a big number in such a big country.

So, stopping the refugee boats is a trivial demographic benefit. It does, however, provide a great political benefit to the government, because they have created the entirely false idea that refugees are criminals and that ordinary Australians need to be protected from them.

By calling boat people “illegals” the Abbott government has deceived the public and has induced them to tolerate the calculated mistreatment of people who are desperate enough to risk their lives to escape persecution. The Labor opposition has not dared step forward to tell the truth about it.

Even if we are so in love with politicians that we get pleasure from giving them a political advantage (even a dishonest one), we need to look at what it costs us.

Australia spends about $5bn a year mistreating asylum seekers. But that is just the financial cost. As Hopkins’ column shows, it has plainly cost us our national reputation.

Refugees have traditionally made a major contribution to the Australian economy. Many major studies show that the initial costs associated with new arrivals are more than compensated for once immigrants have been in Australia more than 10 years.

“Boat people” are a special group of immigrants. They do not come as a free choice: they come to escape persecution in their own country. They come from a different culture, with a different language; they risk their lives to get here and they take on the burden of starting again.

What’s not to like about them? They are people with initiative and courage, not, as Hopkins says, a “plague of feral humans”.

It would be a fine thing if we could show Katie Hopkins she is wrong about Australians. But that won’t happen until our politicians start telling the truth: we are brutalising innocent people, and it’s simply un-Australian.

To read the original article -
Rescue boats? I’d use gunships to stop migrants
You may as well set up a Libya to Italy P&O ferry

I still don’t care. Because in the next minute you’ll show me pictures of aggressive young men at Calais, spreading like norovirus on a cruise ship.
Posted by seemorerocks at 15:12