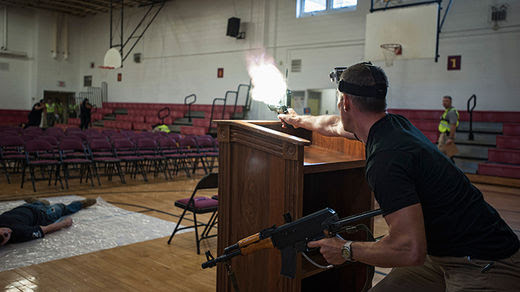 US Army field manuals admit that public drills are aimed at dealing with political dissidents that need to be "reeducated to gain a new appreciation of US policies," Paul Joseph Watson, Infowars Editor at Large told RT's In the Now.

RT: The police in the US are accused more than ever now of militarization. A video has appeared online showing armed national guardsmen conducting exercises near a children's playground in Virginia. We contacted the infantry brigade - here's what they told us: coordination was made with the Staunton Police Department, these are freshers who are training on basic military subjects like drill and ceremonies, basic first aid, military courtesies and the guns they carry are replicas. What is wrong with it?

Paul Joseph Watson: What is wrong with that is the fact that they are doing it not on base but in public. And we have to put this in the context of a spate of videos which have emerged in the recent weeks with not only National Guard but US Army troops in some cases working with police conducting these public drills which in some cases, not in this case but others, are based around crowd control and civil unrest. And the line they always give us that it's designed for overseas combat, foreign operations. But if you then read the US Army's actual manuals that they release, it's clear that it's for dual purpose, it's for "dissidents" on US soil. So the media regurgitate this claim that all these drills are just foreign operations. Yet they are doing it in public, in plain sight, while privately in their own field manuals admitting that it's to take on "dissidents within the continental US." That's why people are concerned about it and a lot of our audience is National Guard or former or current US military. They are concerned about these public drills. They didn't enlist to police the US people which is a lot of this seems to be geared towards.


RT: Why are we seeing such a rise in the methods riot police are using? How do you secure any kind of security in this state without these kinds of institutions to keep the peace so to say?

PJW: Keeping the peace is one thing, but when they identify, for example CNN reported a few days ago... demonstrators in Ferguson, Missouri are called "enemy forces". No matter what you think about the motive behind those demonstrations - that's of concern. When they identify people in New Hampshire, occupy activists, libertarians, 'free staters' as domestic threats and that's why they are buying the armored vehicles and that's why people are concerned. The police chief in New Hampshire said "We need to buy these armored vehicles to deal with domestic political activists," not with genuine security threats, but with protestors and demonstrators. So that's why this has caused such concern. 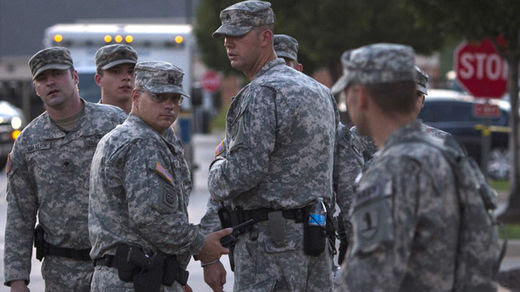 RT: But in Ferguson, Missouri we saw not just rioting, but looting and setting buildings on fire. How can it be dealt with without the National Guard involved?

PJW: I'm not against the National Guard providing security but you have to read their own manuals. For example Civil Disturbance Operations - this is US Army manual - which states that they will take on and "reeducate dissidents on US soil domestically," as part of their wider training agenda for these civil disturbance operations. So this is not about dealing with violent threats, in their own manuals they say its political dissidents that need "to be reeducated to gain a new appreciation of US policies." So this is clearly politically geared towards dealing with protestors both on the left and on the right, occupy activists as well as tea parties. And they admit that in their own manuals. So again this is not about just dealing with violent protest - nobody would be against that. It's about political targeting of demonstrators.

RT: Why are we seeing such a rise in targeting of the so-called dissident in the United States? Is it the fear that the protests will worsen somehow?

PJW: That's definitely the fear, that's why they are buying all these bullets, as well as buying riot gear. The economist Robert Johnson at the Davos economic forum back in January said that the elite buying these secret hideaways in these remote places like New Zealand because they are expecting more events like Ferguson, Missouri because of the lack of faith in the political system, the lack of credence in the political system and wealth inequality. So they expect civil unrest in the US. That doesn't mean they are about to impose martial law it just means they are preparing for it because of these factors- wealth inequality and a complete collapse in a faith in the political system - being prime amongst them.

RT: How much of accountability is there with these forces?

PJW: The positive thing about this is they handed it out surveys to US troops National Guard in the past stretching back ten years or more where they asked them "in an event of a national emergency will you fire on US citizens, in the event of mass confiscation program will you fire on US citizens?" And the vast majority of the US Army and National Guard have always said "no." So that gives us hope if they are commanded to follow these orders they will refuse to do so. And again a lot of these videos are forwarded to us by our own listeners who are ex-military and even current military. So it shows that they don't support in many cases what they are being ordered to do in terms of this potential domestic repression.

Comment: While there may be genuine concern of more violent political unrest in the USA, if there were a sufficiently hyped 'national emergency' all these programs could easily be implemented in order to create a domestic situation eerily similar to Nazi Germany. If we look at a brief sample of news from around the world, we see that the probability of such a scenario seems to be increasing daily:
Posted by seemorerocks at 19:34