Comments from Mike Ruppert:
-- This is not the Reuters story from yesterday. This is an Independent story from today. And the simple stark message is the new overriding global reality we live in... today.
As we have so accurately described here since January, the United States and Israel have thrown their best shots and failed miserably. U.S. foreign, military and economic policy, all of which is based upon lies, is standing naked, broken and bereft today in global sunlight. And the changes that come now will be fast, furious and permanent.
Nothing has changed about our priorities, which have always been relocalization of food production and the building of small, tight communities. These developments should have a profound impact on the presidential race, giving Ron Paul even more impetus and making Romney and the rest, look as ridiculous as they already are. The United States empire has been broken. It is just a shame that the criminals who rule it still have all those weapons to use. -- MCR
'You can no longer dictate to the world,' Ahmadinejad tells US
The Iranian President, Mahmoud Ahmadinejad, said yesterday that the US and Nato could no longer dictate policy to the rest of the world and called for the immediate withdrawal of their troops from Afghanistan. 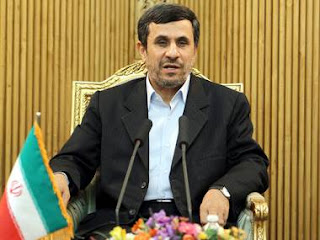 The Independant,
27 March, 2012
Despite threats of Israeli or US attack, the Iranian leader, speaking at a regional conference on Afghanistan in Tajikistan, sounded confident that Iran was not being isolated politically and economically.
Iran has been under increasing pressure after Israel's threat of air strikes on its nuclear facilities pushed the US and European Union into imposing tough sanctions on Iranian oil exports and financial transactions. Iran has also seen its most important foreign ally, Syria, convulsed by an uprising against Bashar al-Assad. But in recent weeks the US has appeared to back away from military conflict with Iran and Mr Assad has, for the moment, stabilised his rule by crushing rebel enclaves after Russia and China vetoed UN Security Council action against him.
In Dushanbe, Mr Ahmadinejad said Nato should use part of its military budget to revive the Afghan economy. The US alone spends $100bn a year on military operations in Afghanistan.
"Nato and the United States should change their policy because the time when they dictate their conditions to the world has passed," said Mr Ahmadinejad. "It is better to respect nations than to scare them and colonise them. The time of imperialism has long gone."
The US delegation to the conference, headed by Robert Blake, the Assistant Secretary of State for South and Central Asia, left the hall at the start of Mr Ahmadinejad's speech and returned when he had finished.
Iran benefited from American military intervention in the region after 9/11 when the US overthrew the Taliban in 2001 and Saddam Hussein in 2003 – both regimes hostile to Iran. Iran was concerned US troops in Iraq would be used against it, but was able to foster Iraqi opposition to the US presence, forcing an American withdrawal.
More recently, Iran may have been caught by surprise by the success of the Israeli Prime Minister, Benjamin Netanyahu, in convincing the US and Nato he might launch a unilateral attack on Iran on the grounds it is developing a nuclear device. Regardless of whether Mr Netanyahu was bluffing, this has led to the imposition of sanctions. At the same time, the Iranian leadership is divided by factional disputes, with Mr Ahmadinejad at odds with the Supreme Leader, Ali Khamenei, over policy.
This division comes on top of claims Mr Ahmadinejad fraudulently won the 2009 presidential election. The political struggles have made it difficult for any Iranian leader to compromise in negotiations on the nuclear issue.
Posted by seemorerocks at 08:19