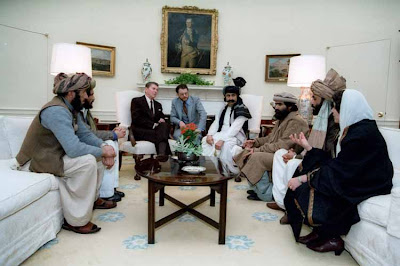 Ronald Reagan meets Afghan Mujahideen Commanders at the White House in 1985 (Reagan Archives)
Al Qaeda and the Role of Western Intelligence [to be continued in Part II]
Acknowledged by the CIA, the Islamic jihad "was" a US sponsored "intelligence asset" going back to the heyday of the Soviet-Afghan war (1979-1989).
The intelligence community admits, yes we created the Mujahideen, we set up the training camps and the koranic schools together with Pakistan's Inter Services Intelligence (ISI). Acting on behalf of the CIA, the ISI was involved in the recruitment, training and religious indoctrination of the "jihadists" described by President Ronald Reagan as "Freedom Fighters".
From the outset of the Soviet-Afghan war in 1979 to the present, various Islamic fundamentalist organizations became de facto instruments of US intelligence and more generally of the US-NATO-Israel military alliance.
Unknown to the American public, the US spread the teachings of the Islamic jihad in textbooks "Made in America", developed at the University of Nebraska:
... the United States spent millions of dollars to supply Afghan schoolchildren with textbooks filled with violent images and militant Islamic teachings, part of covert attempts to spur resistance to the Soviet occupation.
The primers, which were filled with talk of jihad and featured drawings of guns, bullets, soldiers and mines, have served since then as the Afghan school system's core curriculum. Even the Taliban used the American-produced books,..
The White House defends the religious content, saying that Islamic principles permeate Afghan culture and that the books "are fully in compliance with U.S. law and policy." Legal experts, however, question whether the books violate a constitutional ban on using tax dollars to promote religion.
... AID officials said in interviews that they left the Islamic materials intact because they feared Afghan educators would reject books lacking a strong dose of Muslim thought. The agency removed its logo and any mention of the U.S. government from the religious texts, AID spokeswoman Kathryn Stratos said.
"It's not AID's policy to support religious instruction," Stratos said. "But we went ahead with this project because the primary purpose . . . is to educate children, which is predominantly a secular activity."
... Published in the dominant Afghan languages of Dari and Pashtun, the textbooks were developed in the early 1980s under an AID grant to the University of Nebraska -Omaha and its Center for Afghanistan Studies. The agency spent $ 51 million on the university's education programs in Afghanistan from 1984 to 1994." (Washington Post, 23 March 2002)
The role of Western intelligence agencies in support of Al Qaeda affiliated organizations will be outlined in Part II
PART II: "WHO IS BEHIND AL QAEDA"
Posted by seemorerocks at 12:41