Can you imagine the effects of explosive methane being leaked into the atmosphere for the next few months?!
- Aircraft and vessels have to go around an exclusion zone of many miles in all directions. That is how pressurized the methane is. In fact, it is so pressurized that the enormous reservoir will be empty long before then.
Methane is a greenhouse gas twenty times more powerful than CO2. This, coupled with massive Siberian releases over the last six months as the permafrost melts, producing many vertical columns of methane, also miles across -- tells me that the human race has chosen its method of self-extermination.---MCR
Total: "may be months" to stop N.Sea gas cloud
A cloud of explosive natural gas boiling up from the North Sea out of a leak at Total's evacuated Elgin platform forced another shutdown off the Scottish coast on Tuesday as the French firm warned it could take six months to halt the flow.
. 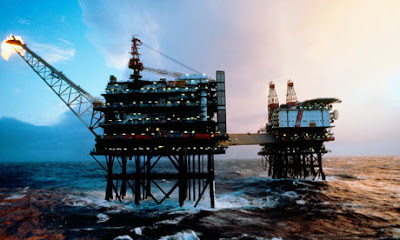 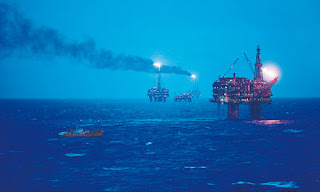 The Guardian,
26 March, 2012
Oil giant Total has confirmed that a major gas leak on one of its North Sea platforms could take several months to stop and admitted there was a risk of explosion.
All 238 staff were evacuated from the Elgin platform after the gas leak was discovered on Sunday afternoon. Shell is also removing workers from two offshore installations close to the Elgin platform.
Total, the French oil and gas group, was unable to say whether the airborne fuel cloud around its leaking Elgin offshore platform was growing or shrinking despite describing the situation as "currently stable" on Sunday.
"We continue to take all possible measures to try to identify the source and cause of the leak and to bring it under control," Total said.
A spokesman said the cloud, which is visible to workers on near by platforms, was made up of condensate – described as being "like a very light petrol" – which the company said would ultimately evaporate in the atmosphere.
Last year documents obtained by the Guardian showed the two rigs with the most frequent oil spills in the North Sea in recent years were owned by Shell and Total.
The papers, released under freedom of information laws, revealed for the first time the names of companies that caused more than 100 potentially lethal and largely unpublicised oil and gas spills in the North Sea in 2009 and 2010.
In relation to the current leak, Total said it was liaising closely with the Health and Safety Executive, the Department of Energy and Climate Change, Marine Scotland and the coastguard.
The company said it had also mobilised experts from elsewhere in the Total Group to offer additional assistance and help deal with the incident.
Posted by seemorerocks at 10:05