US anti-terrorism law curbs free speech and activist work, court told
Controversy over NDAA centres on loose definition of key words, such as who are 'associated forces' of named terrorist groups 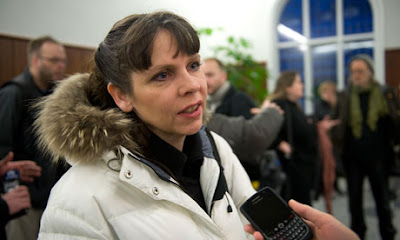 Icelandic MP Birgitta Jonsdottir said she fears she could be arrested for her association with WikiLeaks. Photograph: Halldor Kolbeins/AFP/Getty Images
the Guardian,
29 March, 2012
A group political activists and journalists has launched a legal challenge to stop an American law they say allows the US military to arrest civilians anywhere in the world and detain them without trial as accused supporters of terrorism.
The seven figures, who include ex-New York Times reporter Chris Hedges, professor Noam Chomsky and Icelandic politician and WikiLeaks campaigner Birgitta Jonsdottir, testified to a Manhattan judge that the law – dubbed the NDAA or Homeland Battlefield Bill – would cripple free speech around the world.
They said that various provisions written into the National Defense Authorization Bill, which was signed by President Barack Obama at the end of 2011, effectively broadened the definition of "supporter of terrorism" to include peaceful activists, authors, academics and even journalists interviewing members of radical groups.
Controversy centres on the loose definition of key words in the bill, in particular who might be "associated forces" of the law's named terrorist groups al-Qaida and the Taliban and what "substantial support" to those groups might get defined as. Whereas White House officials have denied the wording extends any sort of blanket coverage to civilians, rather than active enemy combatants, or actions involved in free speech, some civil rights experts have said the lack of precise definition leaves it open to massive potential abuse.
Hedges, who is a Pulitzer Prize-winner and longtime writer on the Middle East, told New York judge Katherine Forrest on Thursday that he feared he might be subject to arrest under the terms of NDAA if interviewing or meeting Islamic radicals could constitute giving them "substantial support" under the terms of the law.
"I could be detained by the US military, held in a military facility – including offshore – denied due process and incarcerated until 'the end of hostilities' whenever that is," Hedges said. He added that the law was already impacting his ability to work as he feared speaking to or meeting with sources who the US government could see as terrorists or advocates of violence.
"Any kind of language in my presence that countenances violence against the US … given the passage of the NDAA, really terrifies me," he said.
Testifying alongside Hedges was Kai Wargalla, a German organiser behind Occupy London, and a supporter of WikiLeaks, which has extensively published secret US government documents.
Wargalla said that since British police had included Occupy London alongside al-Qaida on a terrorism warning notice, she was afraid of the implications of NDAA. She said that after NDAA was signed she was no longer willing to invite an Islamic group like Hamas to speak on discussion panels for fear of being implicated a supporter of terrorism. "We are on a terrorism list just under al-Qaida and this is what the section of the NDAA is talking about under 'associated forces'," she said.
Author and campaigner Naomi Wolf read testimony in court from Jonsdottir, who has been a prominent supporter of WikiLeaks and a proponent of free speech laws. Jonsdottir's testimony said she was now afraid of arrest and detention because so many US political figures had labelled WikiLeaks as a terrorist group.
Despite receiving verbal assurance from US officials that she was not under threat, Jonsdottir testified she would not travel to the US despite being invited to give lectures in the country. "[The NDAA] provisions create a greater sense of fear since now the federal government will have a tool with which to incarcerate me outside of the normal requirements of the criminal law. Because of this change in the legal situation, I am now no longer able to travel to the US for fear of being taken into custody as as having 'substantially supported' groups that are considered as either terrorist groups or their associates," said Jonsdottir in the statement read by Wolf, who is also a Guardian commentator.
In an opening argument, lawyers for the plaintiffs argued that they would try to show the definitions used in the NDAA provisions were so unclear that it would have a "chilling" effect on the work of journalists, activists and academics even if no one was actually detained.
Lawyers for Obama, and other named defendants in the case like the defence secretary, Leon Panetta, offered no opening statement nor did they currently plan to call any witnesses. However, in cross-examination of Hedges, Wargalla and another witness they repeatedly pointed out that at no stage had the US government ever been shown to have threatened any of them with detention under the terms of the new law.
Forrest will now seek to rule on whether any of the plaintiffs have shown enough convincing evidence that they have "standing" to move the case forwards. If that happens she will also then have to rule on a possible temporary injunction against the NDAA, which would undoubtedly trigger a high profile legal battle.
Posted by seemorerocks at 08:48