Resilience: How to Build a Community

How Many Circles Does it Take to Make a Community?
Dave Pollard 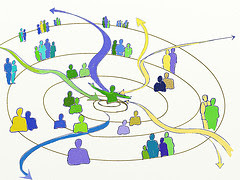 How To Save The World,
27 March, 2012
Last evening I spent a couple of hours with three of my Bowen In Transition colleagues — Don Marshall, Rob Cairns and Robert Ballantyne — discussing what, if anything, we might do to start preparing our community (Bowen Island, off Vancouver BC, population 3800, area 20 sq. mi.) for the economic, energy and ecological crises — and perhaps even collapse — we expect to see in the coming decades.
Bowen in Transition, like many global Transition Initiative communities, is already doing several short-term small-step activities — learning about and (at a personal level) applying permaculture principles, obtaining and acting upon home energy audits, compiling a list of local experts in sustainable food, energy, building etc., holding awareness events etc. But as I noted in my recent Preparing for the Unimaginable post, I am concerned that we need to start thinking about longer-term, larger-scale, community-wide changes if we want to have a community sufficiently competent, self-sufficient and resilient enough to sustain ourselves through major and enduring crises.
I have read some of the “energy descent plans” of some of the leading Transition communities, and they strike me as being long on ideals and objectives and short on credible strategy — how to get there from here. And while my original thought was to draft a “Transition and Resilience Plan” that would include current-state data, scenarios, impact analyses and detailed action plans by community segment (food, energy etc.), I have come to realize that our future is so “unimaginable” that strategic planning is impossible — we cannot begin to know what we must plan for, and if we guess, we will be almost certainly so wrong that our plan will prove mostly useless.
Instead, I wondered if it made sense to have what Don, Rob and Robert called a “Working Towards” plan — specific ideas for helping us (1) build community and increase collaboration and sharing, (2) reduce dependence on imports and centralized systems and increase self-sufficiency, and (3) prepare psychologically and increase resilience for whatever the future holds. The idea was to start doing this within our 40-person Bowen in Transition group, and then engage others, until a majority of Bowen Islanders have acquired this knowledge and these capacities, and Bowen has become a real community. “Working Towards” these three objectives — community, self-sufficiency and psychological resilience — seemed to be something we could all agree on regardless of our ideology.
The more I thought about this ambitious goal, the more skeptical I became. Even if we could get our 40 Transition-savvy members to collectively model this behaviour (when we can’t get most of them to even show up for meetings), how could we possibly scale this up to a couple of thousand people?
As we talked, it was clear that each of us was sufficiently passionate about Transition to stay involved in it to some extent, focused mostly on short-term payback actions in the areas each of us cares about — for Don that includes water, waste management and well-being, for Rob it includes renewable energy, conservation and sustainable technology, for Robert it includes learning and education, and for me it includes livelihoods, transportation, ecological sustainability and self-governance. But as Rob pointed out, most Bowen Islanders are so busy (and stressed) looking after (and out for) family, homes and careers they have no cycles left to do more than vote, sign petitions, and attend occasional information meetings. Transition, even for the aware, is mostly in the “important but not urgent” category.
How do we make Transition urgent, or, if not urgent, at least easy or fun to be involved in in some meaningful way? Robert talked about the value of stories in getting people to a common understanding, which might be a way to create a sense of urgency. He said most Bowen Islanders came here from elsewhere, and their story is mostly about why they came here and what they consciously gave up to do so. 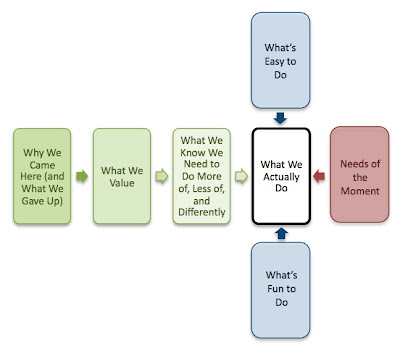