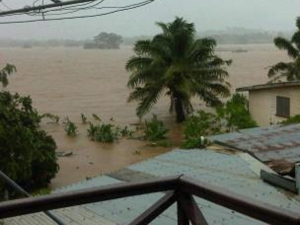 TVNZ,
31 March, 2012
A severe flood warning remains in force in Fiji with hundreds forced to evacuate their homes, roads closed and flights cancelled.
Reports this morning suggest the flood waters are receding in most parts in the west of the main island, Viti Levu, which have been worst affected by the heavy rain.
Rakiraki, Sigatoka and Nadi were said to be under water after rivers burst their banks, and authorities said a large number of people were stranded on their roofs by the intense flooding.
Twenty five people were rescued from Nadi last night and Fijivillage.com said a total of 1843 people were taking shelter in the 59 evacuation centres set up to cope with the storm.
Most flights in and out of Nadi Airport have been cancelled today.
The heavy rain was caused by a shallow tropical depression located west-southwest of Nadi and is expected to last until tomorrow.
Posted by seemorerocks at 10:32