This is a pretty clear indication about how the world is responding to the United States and its sanctions: finding ways to move around them and to move away from the petrodollar
Iran helps Syria ship oil to China: sources
Iran is helping its ally Syria defy Western sanctions by providing a vessel to ship Syrian oil to a state-run company in China, potentially giving the government of President Bashar al-Assad a financial boost worth an estimated $80 million.. 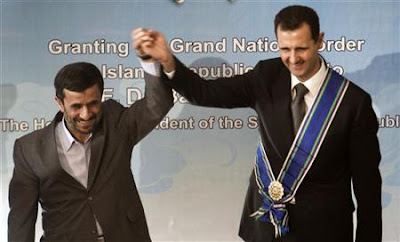 Reuters,
30 March, 2012
Iran, itself a target of Western sanctions, is among Syria's closest allies and has promised to do all it can to support Assad, recently praising his handling of the year-long uprising against Assad in which thousands have been killed.
China has also shielded Assad from foreign intervention, vetoing two Western-backed resolutions at the United Nations over the bloodshed, and is not bound by Western sanctions against Syria, its oil sector and state oil firm Sytrol.
"The Syrians planned to sell the oil directly to the Chinese but they could not find a vessel," said an industry source who added that he had been asked to help Sytrol execute the deal but did not take part.
The source named the Chinese buyer as Zhuhai Zhenrong Corp, a state-run company hit by U.S. sanctions in January.
A Zhuhai Zhenrong spokeswoman said: "I've never heard about this." She declined further comment.
The U.S. State Department said in January that Zhuhai Zhenrong was the largest supplier of refined petroleum products to Iran, on which the West has imposed sanctions because it suspects Tehran of trying to develop nuclear weapons.
China's willingness to start importing Syrian oil offers a rare break in the country's growing isolation.
Syria, a relatively modest oil exporter, has been unable to sell its crude into Europe, its traditional destination until September last year when European Union and U.S. sanctions halted exports.
The crude oil cargo, worth around $84 million assuming a discounted price of about $100 a barrel, could provide Assad with much-needed funds after another round of sanctions designed to further isolate the country's ailing economy were imposed by the European Union last week.
Syria's Sytrol, which has been on the EU and U.S. sanctions list since last year, referred calls to the country's oil ministry. No one answered repeated calls by Reuters at the oil ministry. Iranian authorities were not available to comment.
The source added Sytrol had enlisted contacts in Venezuela to help find a vessel that could pick up the cargo. The problem was ultimately resolved by the Iranian authorities, who sent the tanker M.T. Tour to take on the cargo.
The Maltese-flagged tanker is owned by shipping firm ISIM Tour Limited, which has been identified by the U.S. Department of Treasury as a front company set up by Iran to evade sanctions.
The M.T. Tour reached the Syrian port of Tartus at the weekend, where it loaded the 120,000 metric tonne (132,277 tons) cargo of light crude oil, according to the industry source and shiptracking data.
Satellite tracking showed the vessel was last spotted near Port Said in Egypt, where is was due to arrive on Wednesday. Its final destination was not available but the industry source said the vessel was likely to head to China or Singapore.
"I was asked to provide an option to ship to southern China or Singapore," the source said.
Posted by seemorerocks at 08:13