SPAIN IS THE NEW GREECE: And This Time It's Big Enough To Matter...
Spanish trade unions are holding a general strike across the country today to protest new labor reforms, and by all accounts it has been a largely peaceful protest. 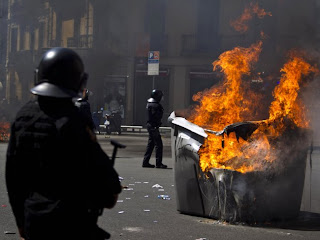 Business Insider,
29 March, 2012
Spanish trade unions are holding a general strike across the country today to protest new labor reforms, and by all accounts it has been a largely peaceful protest.
While for the most part conditions on the ground are relatively normal, photos from Madrid, Barcelona, and Pamplona indicated that some young protestors are escalating the angst, painting symbols supporting anarchy on walls, and causing small bouts of destruction.
Such events are reminiscent of similar protests in Syntagma Square, Greece, where groups of youthful protestors turned riotous despite generally calm strikes.
Two major points give us particular trepidation: the fact that these and similar protests closely resemble early protests in Greece a few years ago—when almost no one realistically considered the possibility of a Greek debt restructuring—and the sheer scale of Spanish youth unemployment.
As in Greece, young people have been seen as responsible for escalating peaceful political protests to violent riots. Spain's unemployment data suggest that protests there could eventually be much larger—nearly half of young people are already unemployed and they face a tough future and a shrinking social safety net amid economic contraction and austerity measures.
We can't help but ask: Could Spain turn into the next Greece?
Click here to see photos of Spain today >


Fighting With Spanish Windmills, Or How Spain's Debt/GDP Ratio Is Double What Is Reported

Zero Hedge,
29 March, 2012
Fighting With Spanish Windmills
When I first attempted to find a more realistic debt to GDP ratio for Spain, Belgium, Italy et al I did it on a stand-alone basis; no inclusion of their European liabilities. When I approached Germany, given their size and importance in the EU, I focused upon their liabilities to the European Union. Several institutions have since asked me to consider the total liabilities for each country as every nation in the European Union has national debts as well as debts for their percentage of ownership for the EU and the European Central Bank. Using the combination of national liabilities and any nation’s percentage of EU/ECB liabilities one then could ascertain a final and complete picture of a real debt to GDP number that, unlike the Eurostat data, would be inclusive of sovereign guarantees, contingent liabilities and their responsibilities to the EU and the ECB. This schematic then would tell each of us what a given country actually owed so the total reality could be assessed for judgment. Given that Spain is currently in focus and that nowhere that I have ever seen has there been an accurate national debt coupled with Spain’s European debt schematic; I have decided to provide you one.
“What I said about the economic side of the Inquisition supplies an explanation which will occur at once to the reader. It was a question of the division of the spoils. Sixtus IV and his successors greatly disliked the Spanish Inquisition because all the confiscated wealth remained in Spain. The Popes raised a little by receiving at Rome appeals -- those humane and beneficent appeals -- from the sentences of the Spanish Inquisitors, and remitting penances for a money-payment. But the Spaniards retorted by refusing to recognize the Pope's dispensations, and there was an unholy struggle.”
-Joseph McCabe, The Story of Religious Controversy
The Data
Spain’s GDP $1.295 trillion
SPAIN’S NATIONAL DEBT
Admitted Sovereign Debt $732 billion
Admitted Regional Debt $183 billion
Admitted Bank Guaranteed Debt $103 billion
Admitted Other Sovereign Gtd. Debt $ 72 billion
Total National Debt $1.090 trillion
SPAIN’S EUROPEAN DEBT
Spain’s Liabilities at the ECB $332 billion
Spain’s Cost for the EU budget $ 20 billion
Spain’s Liabilities for the Stabilization Funds $125 billion
Spain’s Liabilities for the Macro Fin. Ass. Fund $ 99 billion
Spain’s Guarantee of the EIB debt $ 67 billion
Spain’s Total European Debt $643 billion
--------------------------------------------------------------------------------------------------
Spain’s National and European Debt $1.733 trillion
Spain’s OFFICAL debt to GDP Ratio 68.5%
Spain’s ACTUAL Debt to GDP Ratio 133.8%
“Yes, they have tricks up their sleeves and multiple methods of presentation and by multiple people. Yes, they give us an illusion with the appearance of truth but we are better than that and far smarter than they have calculated. I give you truth without illusion and regardless of their contentions; we can differentiate between reality and the fantasy that they weave for their own dark purposes.”
-The Wizard
Posted by seemorerocks at 12:24