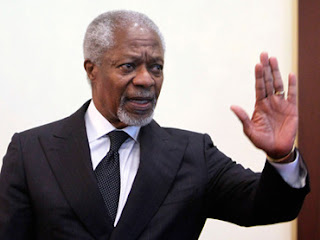 .
Kofi Annan has praised Damascus’s acceptance of the plan as “an important initial step” towards ending violence in the country and creating an environment to start a dialogue between the regime and the Syrian opposition.
Annan's plan has been endorsed by the UN Security Council in a non-binding presidential statement.
The plan includes a cease-fire by Syrian forces, a daily two-hour halt to fighting to provide humanitarian aid, and talks to search for a political solution to the crisis.
The opposition has also welcomed the government’s acceptance of the UN peace plan, a member of the Syrian National Council has said.
Bassma Kodmani, a Paris-based member of the group, told the Associated Press by phone Tuesday “we welcome all acceptance by the regime of a plan that could allow the repression and bloodbath to stop.”
“We hope that we can move toward a peace process,” she continued.
Annan has already met with Assad twice. He uniformly demanded the Syrian government and the opposition immediately cease violence in populated areas.
Assad responded by saying that "Syria is ready to make a success of any honest effort to find a solution for the events it is witnessing."
The Syrian president, however, said he cannot stop protecting his citizens.
"No political dialogue or political activity can succeed while there are armed terrorist groups operating and spreading chaos and instability,” Assad asserted.
China on Tuesday offered its “full support” to Kofi Annan's mediation efforts in Syria, Annan said. The same commitment came from Russia over the weekend. Russia and China’s support may prove crucial in implementing Annan's plan, which has been endorsed by the UN Security Council in a non-binding presidential statement.
Moscow and Beijing twice vetoed sanctions proposed by the UNSC, with Russia demanding the council issue a call to end bloodshed in the Arab country not only to the ruling regime, but also to opposition activists.
According to the UN, over 8,000 people have been killed in Syria since the conflict erupted over a year ago.