Business Standard,
29 March, 2012
Crude hit $128 a barrel this month, only $20 short of its 2008 peak, and is up more than 15% since January, largely because of sanctions against oil producer Iran.
"For the first time the world will pay $2 trillion of oil import bills," the IEA's chief economist Fatih Birol told Reuters.
Birol said the bill for importing nations had risen from $1.8 trillion in 2011 and $1.7 trillion in 2008.
If crude were to stay at current levels for the rest of the year - about $125 a barrel for Brent and $107 for US crude - oil import bills would cost 3.4% of GDP, up from 3.1% in 2011, Birol said.
He said the European Union was the hardest-hit of industrialised regions on oil import costs because, when converted into euros, the average EU oil price this year was running higher than in 2008.
Dollar-denominated oil costs mean European consumers pay more when the euro weakens against the dollar. The euro has fallen from $1.49 in May at its peak in 2011 to $1.33 now.
At current prices the bloc will pay $500 billion in 2012 up from $470 billion last year, Birol said. The EU also faced a 2012 gas bill of $120 billion, $20 billion higher than last year.
The cost of oil imports to the United States in an election year would reach a record $426 billion this year, up from $380 in 2011.
China would have to pay $250 billion this year, up $50 billion on 2011.
"If China's economy slows down as a result of high oil prices then it will have an impact on China but also the rest of the world," said Birol, noting that the world's second biggest oil consumer had helped pull the world out of the 2008 recession.
Japan's bill would swell to $119 billion, up from $178 billion, and India's net import costs will rise to $118 billion, up from $105 billion, Birol said.


World oil output drops amid gulf fears
Global oil supplies are being increasingly squeezed, pushing up prices, because of an Iranian threat to close the Strait of Hormuz, a strategic Persian Gulf oil artery 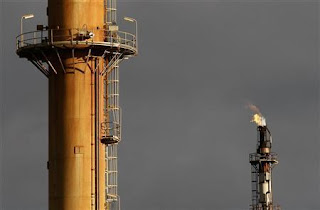 UPI,
28 March, 2012.
A sharp drop in output by Iran, long the second-ranked producer in the Organization of Petroleum Exporting Countries, due to Western sanctions linked to Tehran's nuclear program and concerns that Saudi Arabia won't be able to pick up the slack as it promises are major factors of the price increases.
Global production has fallen by 1.2 million barrels a day in recent weeks, about the same as the volume lost during Libya's eight-month civil war in 2011.
Prices are around $125 per barrel, up 15 percent this year and near their highest level since the 2008 oil crisis and "rapidly becoming the dominant concern of government and business leaders," the Financial Times reported Friday.
"It is a reminder that -- for all the investment in renewable energy and excitement about shale gas -- the world still runs on oil, as it did in the 1970s when supply cuts caused turmoil in Western countries.
"Hitting real incomes in oil-importing countries, higher prices threaten to chip away at an already fragile global economy. They could also sway the outcome of the U.S. election," the newspaper observed.
Iran's production has been declining for years because sanctions have blocked foreign investment to upgrade rundown infrastructure. The tightening sanctions are accelerating that decline.
Iran was exporting around 2.6 million bpd in November, about 3 percent of global consumption. By June, when a European oil embargo take effect, that's expected to fall by 1 million bpd.
Analysts predict Tehran may be forced to curtail production if it can't sell its exports.
"If it does so," the Financial Times said, "output could fall to levels not seen since the end of the Iran-Iraq war in 1988."
Libya's still struggling to restore its pre-war production level of 1.6 million bpd, while Sudan's output of around 400,000 bpd has been cut off because of an escalating dispute between the oil-rich infant state of South Sudan and its former ruler Sudan.
Yemeni production has been badly hit by more than a year of deadly political upheaval and Syria's has also slumped because of a year-old uprising against President Bashar Assad.
Individually, these production cutbacks would normally have little effect on the global oil supply but taken together amid the smoldering Persian Gulf crisis, bad weather and technical problems these add up to a problem -- and these disruptions are expected to be prolonged.
Iraq's rising production level, which Baghdad pegged at 3 million bpd in February for the first time since 1979, has ameliorated the crisis somewhat.
But with the oil industry hard put to meet rising demand, and no sign of a diplomatic breakthrough over Iran's nuclear ambitions that could prevent a threatened conflict, concerns about supplies are growing.
Saudi Arabia, the world's leading producer and which has most of the world's spare production capacity, has said it will boost its output to cover production shortfalls but there are increasing concerns that Riyadh doesn't have the capability any longer to keep that promise.
The kingdom raised its output earlier this year from around 8.5 million bpd to 9.85 million bpd amid Middle Eastern shortfalls.
It has poured billions of dollars into its vast fields for years, which should on paper ensure its ability to ramp up output to 12.5 million bpd in a crisis. But industry sources say producing at anywhere near that capacity could involve extracting heavy crudes the market might not want and would be difficult to sustain.
The International Energy agency, the West's oil watchdog, warned March 14 that the global market faces a "bumpy ride" in the coming months even with OPEC production at 31.42 million bpd in February, the highest since mid-2008.
Recent events have led to a decline in OPEC's spare capacity, the traditional cushion in times of crisis.
"There is a buffer in the system but it's not as big as we'd like given the geopolitical uncertainties in the market," said IEA Oil and Industry Head David Fyfe.
But he stressed that tensions should ease off later this year as production increases in Angola, Nigeria, Libya and Iraq boost OPEC's spare capacity. Non-OPEC production is also expected to increase.
Posted by seemorerocks at 14:11