Christchurch - one year on

One year after the earthquake in Christchurch there is a desperate shortage of housing.
11 into four bedrooms won't go 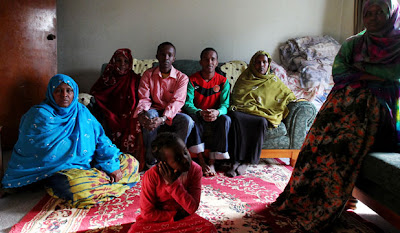 CRAMMED IN: This Somalian family of 11 people are all living together in a four-bedroomed house in Shirley.
Reuters,
31 March, 2012
A family of 11 are living in a four-bedroomed state house in Shirley, as Christchurch's rental housing drought continues to bite.
Three are sleeping on the floor. There is only one bathroom, and they take shifts watching television in the lounge.
The extended family of Somali refugees say they are living in Third World conditions. Because of limited hot water supplies, the only shower in the house has a roster.
The kitchen transforms to a "restaurant" at dinner time, the one washing machine is also rostered and scores of shoes crowd the front door.
"In some parts of the world people are living in Third World conditions, but it is not acceptable in New Zealand," resident Naema Warsame, 33, said.
The single mother of one fled her violent homeland in 1995 and sought refuge in Christchurch six years later.
She was living in the small Shirley house with her aunt, her four cousins and her 6-year-old daughter while she waited for her own family to arrive through New Zealand's annual refugee quota system.
It took five years for her mother, her two brothers and her cousin to be accepted into the country.
Her family arrived in Christchurch five weeks ago, but the long-awaited reunion was hit by the city's rental crisis.
Warsame, who has New Zealand citizenship, started looking for a home for her family before they arrived but says she was met with hostile landlords. Over the phone, two landlords told her: "We don't rent to Somalis".
She said she has looked at more than 10 houses but has always been turned down.
"There has always been prejudice here, but the shortage of houses from the earthquake and the recent knife attacks have made everything even worse," her cousin, Sahra Ahmed, said.
"People are struggling and it has brought out the worst in them."
When refugees come into New Zealand through the quota system, Housing New Zealand and Refugee Services are responsible for finding them appropriate accommodation.
A Housing New Zealand spokeswoman said the agency told Refugee Services Warsame's family could not be housed in Christchurch "because we had no vacant homes".
She said the new arrivals moved into the Shirley state house without the permission of Housing New Zealand.
Chief executive of Refugee Services, Heather Hayden, said the family was not living in an "acceptable situation", but the agency was doing what they could to help.
Only refugees with "strong long-term family links" are now placed in quake-hit Christchurch.
Three families came into the city from this year's quota and Hayden said "this is the only situation where there has been a problem finding a house."
Hayden said Warsame's family had turned down three houses in Christchurch because the family thought they were in the wrong suburb or too damp.