Iranian President Mahmoud Ahmadinejad said on Monday the United States could no longer dictate policy to the rest of the world and warned of growing instability in the West's relations with Pakistan. 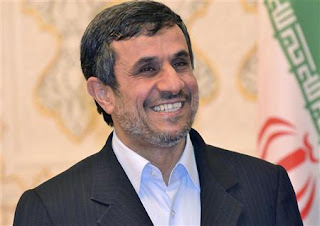 Reuters,
26 March, 2012
Ahmadinejad, speaking at a regional conference on Afghanistan, called for the immediate withdrawal of foreign troops from the country and proposed that NATO use part of its military budget to help revive the Afghan economy.
"NATO and the United States should change their policy because the time when they dictate their conditions to the world has passed," Ahmadinejad said in a speech in Dushanbe, capital of the Central Asian republic of Tajikistan.
"It's better to respect nations than to scare them and colonize them. The time of imperialism has long gone. Those who do not learn from the mistakes of history will be punished."
The U.S. delegation to the conference, headed by Assistant Secretary of State for South and Central Asia Robert Blake, left the hall when Ahmadinejad began to speak and returned after the conclusion of his speech.
Washington has spearheaded international efforts to isolate Iran, including several rounds of sanctions, over a nuclear program that Tehran says is for peaceful purposes only.
Israel and Western nations say Iran is moving towards a nuclear bomb that could change the regional balance of power. Ahmadinejad made no reference to Iran's nuclear program during his speech.
Speaking in Farsi, translated into Russian for conference participants in the former Soviet republic, Ahmadinejad said NATO policy in Afghanistan and other countries would make Western relations with Pakistan worse.
"Relations between NATO and Pakistan - their unsteadiness and instability will only grow," he said. "The main reason for the difficulties in the world is the policy of NATO member countries, undertaken with the aim of reviving colonialism."
AFGHAN WITHDRAWAL
Ahmadinejad said he believed Afghanistan was capable of running its own affairs, without the presence of foreign troops.


Most NATO combat troops are scheduled to leave Afghanistan by the end of 2014. President Barack Obama said the massacre of 16 villagers by a U.S. soldier this month had made him more determined to get American troops out.
Calling for the immediate withdrawal of foreign troops, Ahmadinejad said: "The entire problem lies with NATO and with the policies of NATO members, most of all the United States, which entered Afghanistan under the guise of the war on terrorism and under the same banner is now surrounding India, Russia and China."
The Iranian leader said NATO should help fund the revival of the Afghan economy by paying 25 percent of its military expenditure in Afghanistan, or 5 percent of the total military budget of NATO member countries, annually over the next decade.
He said Iran would offer technical and economic assistance to the country, including investment in education, healthcare and infrastructure projects.
A day earlier, he signed a declaration with Afghan President Hamid Karzai and Tajik President Imomali Rakhmon to build a railway line across the three countries and increase supplies of Iranian oil products and natural gas.
Posted by seemorerocks at 14:29