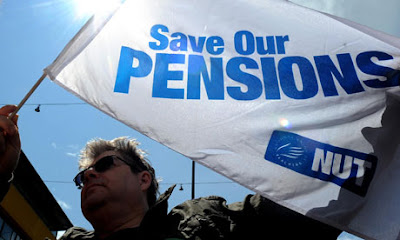 Financial Sense,
26 March, 2012
Britain's 'austerity drive' really has been nothing of the sort when you look at the numbers (which we shall do in a moment), but somehow, in a brilliant piece of marketing, the coalition government have managed to talk tough whilst simultaneously bringing the UK’s Public Sector Borrowing Requirement (PSBR) to a little over 60% ABOVE where it was when they took office in May 2010.
In his most recent piece of surgical brilliance, Greg Weldon (www.weldononline.com) laid out the numbers in simple fashion, revealing just how bad things have become in the Sceptered Isle:
February’s £12.909 billion in Net Borrowing represents the thirteenth largest single-month borrowing by the UK government since the Treasury was founded four centuries ago … and, also represents … the LARGEST EVER Public Borrowing for the month of February.
Further, February’s £12.909 billion in the UK government’s borrowing represents a disturbing +112.8% increase compared to the February 2011 borrowing of £6.066 billion. Indeed, note the horrifying sequential rise in UK government borrowing during the month of February, dating back to 2001, when the government was actually ‘paying down’ debt (monthly Net Public Borrowing, all figures in £, a negative number indicates a ‘net retiring’ of government debt):
Feb-2012 … 12.909 billion
Feb-2011 … 6.066 billion
Feb-2010 … 7.955 billion
Feb-2009 … 7.178 billion
Feb-2008 … 0.833 billion
Feb-2007 … (-) 0.015 billion
Feb-2006 … 1.486 billion
Feb-2005 … 2.034 billion
Feb-2004 … (-) 1.445 billion
Feb-2003 … 0.272 billion
Feb-2002 … (-) 1.565 billion
Feb-2001 … (-) 3.296 billion
Greg continued with a look at the UK government’s debt outstanding NOT including the expansion in the BoE’s balance sheet and points out the following chilling statistic:
We observe the growth in UK Government Debt Outstanding, NOT including the expansion in the Bank of England’s Balance Sheet and official ‘financial intervention’ … revealing the upside acceleration in 2009, and February’s figure, which at 955 billion GBP is the second highest EVER recorded, and is +13.5% higher than the year-ago February total of 877.3 billion.
In just four short years, since February of 2007, UK government debt has nearly DOUBLED, rising by +98.8% !!!! (see chart below)

Certainly not the kind of austerity demanded by Frau Merkel und freunde.
Britain’s budget deficit currently stands at 8.24% of GDP (admittedly, an improvement upon the 11.14% it reached in 2010) so even if David Cameron HAD acquiesced to the pleas from the rest of Europe to join the fiscal compact, it is abundantly clear that there is absolutely zero chance that he would have been able to comply with its terms. In fact, by comparison, Spain and the Netherlands look positively austere (see chart below). 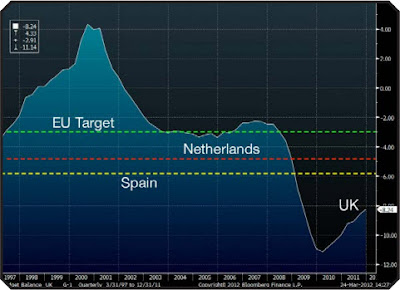 Source: Bloomberg
But it is in amongst the weeds of the UK’s budget projections that the full horror of Britain’s fiscal situation presents itself.
Having wildly optimistic estimates that don’t go anywhere near standing up to any kind of real-world scrutiny is nothing new these days - one only has to look at the forecast curves for the US deficit of the US Congressional Budget Office to witness an exercise in the triumph of hope over experience, but the UK’s own ‘austerity’ program - so loudly praised by those responsible for selling it - appears to be almost devoid of cuts altogether. In assembling any such projection, those responsible are fortunate to have two sides of the ledger to play with and, if everybody is focusing on the level of spending cuts required, it is often safe to assume that nobody is looking at the revenue projections and so that is where one can find the more ... ‘optimistic’ numbers. That fact has been curiously missed by many commentators who have fallen for the siren song of the coalition, amongst them Bloomberg’s very own Clive Crook:
To help restore financial confidence, the government would tighten fiscal policy at once. The idea was that austerity, done correctly, would promote growth. It would remove the threat of fiscal collapse. With public borrowing in check and confidence improved, the private sector would take up the slack.
It didn’t happen. Britain’s households aren’t spending, and its businesses, despite running big financial surpluses, aren’t investing. For the past 18 months output has been essentially flat, still well below its level when the recession began. Official forecasters think output won’t regain its 2008 level until 2014 -- a slower pace of recovery than Britain experienced after the Great Depression.
In one way, the figures flatter the Tories’ fiscal experiment, because the Bank of England has been more forceful than the Federal Reserve in supporting the economy with quantitative easing (where the central bank buys debt to increase the money supply). The Bank of England persisted in this approach despite high inflation, which peaked at more than 5 percent last year, against the Bank’s official target of 2 percent. Without such aggressive loosening of monetary policy, the economy would be in even worse trouble.
Together, though, monetary and fiscal policy are still doing too little to support demand. Inflation has fallen in recent months and, according to the Bank, is on track to drop below the 2 percent target. Some of last year’s inflation surge was due to an increase in value added tax, which will drop out of the numbers. Expectations of inflation have stayed well under control -- a tribute to the Bank’s ability to explain itself -- and, crucially, with unemployment still very high, there’s no sign of wage inflation.
The Bank can do more QE if need be, but looser fiscal policy can and should be part of the mix. Unfortunately, the government is unlikely to admit its mistake and concede that fiscal policy has been too tight...
A looser fiscal policy than the one that has seen borrowing surge since it was implemented and that contains spending INCREASES in each of the next 5 years may NOT be such a good idea if looking for austerity, but to reveal the full horror of the UK government’s basis for their projections, we return to Greg Weldon, who has by no means been fooled for one second (these next paragraphs are definitely NOT for the fiscally faint of heart):
Not only are there NO spending cuts within the UK Budget projections for the next five years, annually through the year 2017 …
… UK government spending will increase, every year, including an expansion of +2.8% scheduled to be implemented this year.
The UK government is ‘banking on’ growth in Revenue that will exceed the rate of growth in Expenditures, including growth of +3.5% cooked-into-the-books for this year.
But, the margin for error is slim, with year-over-year Revenue forecast to grow by more than the growth in year-over-year Spending, by a mere £1.4 billion.
Over the next five years things get even more interesting.
In order to ‘support’ a sizable EXPANSION in SPENDING over the next five years (pegged at +12.7%), the UK Treasury is RELYING on an astronomical rise in Revenue over that same five year period, pegged at +33.4%.
Revenue is forecast to rise by +£184.2 billion over the next five years, or by nearly +£40 billion per year.
Ahem, excuse me … perhaps the UK Treasury overlooked the FACT that Revenue in February, pegged at £38.631 billion was (-) 1.9% BELOW the year-ago February revenue of £39.381 billion.
A decline of nearly £1 billion is FAR from the projections calling for a near +£40 billion per year increase over the next five years.
(There is much, much more in Greg’s report - as there always is - and if you HAVEN’T already signed up for a free trial of his work then do yourselves a HUGE favour and click HERE)
Along with these fanciful estimates, the UK is also relying on a projected fall in the savings rate from 6.6% to 5.0% over the next 4 years to help it reach its targets - and all this in a country with inflation running at a little under double the targeted 2% rate (though admittedly trending in the right direction at last after reaching 5.5% in September of 2011).
But as incredible as all this sounds, perhaps the most oddly-shaped piece of this particular puzzle is the UK government bond market - or, as they are known colloquially, ‘gilts’.
Currently, the only thing remotely ‘gilt-edged’ about UK government bonds is the fact that they have a AAA rating from the geniuses at Moody’s and S&P - but that has, in recent years, become akin to having your accounts approved by Sino Forest’s audit team and so it’s hard to justify the fact that UK Gilts become the world’s best-performing asset class in 2011 (chart below). 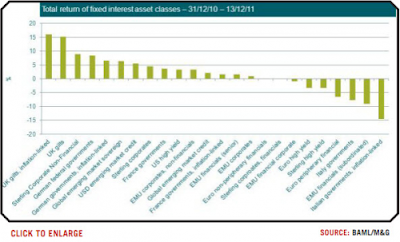 A lot of this performance has been down to Britain’s willingness to be the most eager of Quantitative Easers over the last several years and the £300 billion in gilts that have been bought by the Bank of England since March of 2009 have gone a long way towards establishing perhaps the most curious of government bond markets anywhere in the world (with the possible exception of Japan).
Currently, the BoE has a further £25 billion of gilt purchases approved under the QE program and until the end of June to make those purchases (chart below). What happens after June is anybody’s guess, but, should further easing not be forthcoming, it is hard to see how UK bond yields do anything but go higher - po- tentially a LOT higher based on the underlying state of her finances. 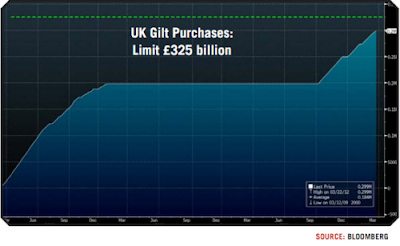