UK: Mayhem at the pumps

Although this is caused by a drivers' strike this is nothing like what we have to look forward to. 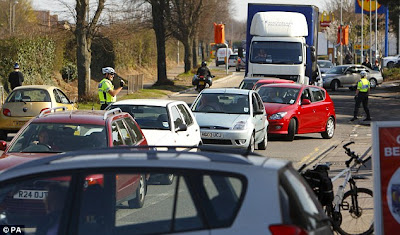 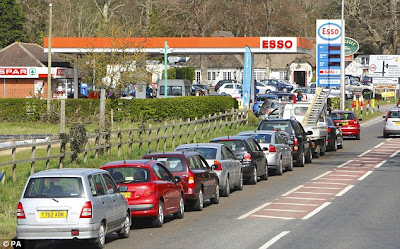 the Guardian,
29 March, 2012
Hopes of a resolution to the fuel tanker drivers' dispute have been raised with the Unite trade union and petrol hauliers edging closer to agreeing peace talks as panic buying continues to grip parts of Britain.
Queues of traffic snaked past petrol stations around Britain as the threat of a national fuel strike panicked motorists into refilling. By lunchtime on Thursday police in Dorset had asked some forecourts to close altogether.
It is understood that Unite and fuel distributors could finalise the framework for discussions by Monday, with talks expected to begin soon after. A spokesman for the Advisory, Conciliation and Arbitration Service said: "Acas has been in contact with Unite officials as well as all the contractors involved in the fuel tanker drivers' dispute. We are now in the process of receiving more detailed briefings from the parties on the various issues underpinning the dispute. This will enable us to determine more clearly the form substantive talks should take to provide the best opportunity for a negotiated settlement.
"We should conclude that process by Monday and would then hope substantive discussions would follow shortly afterwards."
Dorset police confirmed five garages were asked to close for a period because lines of cars were causing congestion in Bournemouth and Weymouth, while there were reports of forecourt closures and petrol shortages across the UK.
Referring to comments by government ministers in recent days, the president of the AA, Edmund King, said bad advice on storing petrol in jerrycans and topping up petrol tanks had created shortages.
"There is no fuel tanker strike and therefore if drivers followed normal fuel-buying patterns there would be no fuel shortage whatsoever," said King. "We now have self-inflicted shortages due to poor advice about topping up the tank and hoarding in jerrycans. This in turn has led to localised shortages, queues and some profiteering at the pumps."
He added that the statutory seven days' notice on setting strike dates would give motorists plenty of time to replenish supplies if a fuel strike does occur. "Even if we do have a strike, which is unlikely, there will be seven days' notice of strike action, and therefore time for drivers to fill up. The AA has advised all along that drivers should follow their normal fuel-buying patterns."
According to the Retail Motor Industry (RMI), the organisation which represents about 5,000 petrol stations around the country, fuel sales have risen sharply, with a survey of some members showing an 81% rise in petrol sales compared with last week. The RMI said tanker supplies were still operating and that there was no need for worry.
Other police forces also called for calm. The Hampshire force condemned "spurious rumours" being spread online for panic-buying. In a statement it said: "It is important for members of the public to bear in mind that members of the Unite union are still in talks with their employers, dedicated to finding a solution which will make strike action unnecessary."
Nonetheless, reports of long queues and empty pumps arrived from around the country. The occasionally chaotic scenes came after advice from ministers supposedly intended to prevent such events, last experienced in 2000 when a blockade of fuel depots by protesters against fuel duty levels saw many forecourts run dry.
Francis Maude, the Cabinet Office minister, initially advised drivers to consider filling up part-empty tanks and keep a jerrycan of fuel in their garage, following a vote organised by Unite for a possible strike by tanker drivers to try to improve health, safety and training standards in the industry. While the first bit of advice has been reiterated by other ministers, they rescinded the jerrycan advice on fire safety grounds.
The Labour leader, Ed Miliband, called on David Cameron and Maude to apologise for "presiding over a shambles on petrol". He said in a statement: "In a delicate situation which demanded statesmanship, the government showed partisanship. They made a crude decision to play politics with petrol without regard for the consequence."
Speaking on BBC Radio 4's Today programme, the roads minister, Mike Penning, said Maude's jerrycan advice was wrong. Penning said: "What Francis didn't quite realise is that a jerrycan holds 20 litres, and of course you're only allowed to have two five-litre cans of petrol if they're in plastic, or two 10-litre cans if they're in metal."
But he insisted that the wider point on keeping cars topped up with fuel was sensible: "What he [Maude] was trying to do was help people get though a very difficult situation. If the strike goes ahead – and we don't want the strike to go ahead, that's why we have Acas involved – it's going to be a much better-prepared situation if petrol tanks are topped up. You don't have to queue for it but if you're driving past [a garage] and you've got half a tank then top up."
But the RMI said the government had "handled the situation badly from day one". Brian Maddison from the group told ITV's Daybreak that one garage in Kent had reported selling out of fuel canisters: "That's the sort of bizarre behaviour that Francis Maude and the rest of the cabinet seem to have encouraged.
"They should have spoken to industry weeks ago when this situation was developing and we could have told them that since the fuel blockade in 2000, some 6,000 forecourts across the UK have closed for business."
Posted by seemorerocks at 08:55