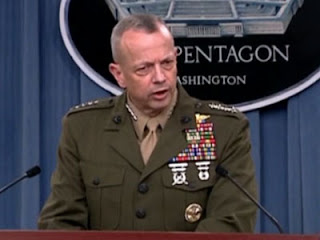 Business Insider,
27 March, 2012
Three more troops have been killed by so-called friendly members of the Afghan security forces. In response to the incidents, the top U.S. and British commanders are telling very different stories.
One American and two British troops were shot at close range in two separate incidents on Monday, reported the Associate Press. They're the latest "green on blue" attacks as international forces commit to training and working more closely with their Afghan allies.
But General John Allen says that these tragic incidents are untypical, reported the Telegraph.
"We should expect that this will occur in counter-insurgency operations, and as we saw it in Iraq and as we've seen it historically in counter-insurgencies, but also in Vietnam. It is a characteristic of this kind of warfare," he said.
He spoke to reporters after two British troops, a Royal Marine and a Soldier, were shot dead by an Afghan army officer following an argument at the U.K. forces base in Helmand province. At the time of his address, it appears the killing of the American service member was not yet known.
In contrast to General Allen's remarks that such incidents are to be expected, Defense Secretary Leon Panetta said attacks by friendly forces are not a trend. He told reporters the killings by Afghans are still sporadic incidents and do not represent the direction of ongoing cooperation: "I don't think they reflect any kind of broad pattern."
The complicated struggle of U.S. and NATO forces in Afghanistan has become a PR nightmare within the last two months. There have been at least 10 troop deaths at the hands of Afghan forces this year.
"I'm not saying things are perfect, and much work remains to be done. But for every bribe accepted, and for every insider threat or what is known as a green-on-blue incident...I can cite hundreds of other examples where they do perform their duties, where the partnership is strong," General Allen also said.
Posted by seemorerocks at 10:22