Poverty-stricken Greek town hits new low
A "humanitarian crisis" is unfolding in an impoverished Greek city where a deepening economic crisis has left thousands seeking food from an international charity more used to helping refugees and bringing aid to famine or disaster zones. News Daily,
30 March, 2012
Once home to a thriving shipbuilding industry, the port city of Perama near Athens has seen its fortunes wane over the years as buyers abandoned it for cheaper options outside Greece.
The country's financial crisis is the latest blow - pushing up unemployment in the area to 60 percent, triple the national average.
Without health insurance or money for fees at state facilities, many of the town's 25,000 residents have begun flocking to a free clinic set up by Doctors of the World seeking medical care and, lately, staples like milk and bread.
The clinic was set up two years ago to treat poor immigrants. Instead, it now finds that 80 percent of its patients are Greeks struggling to get by. Doctors say many of them cannot even afford the bus fare to the local hospital.
"We tell a lot of people that come here: 'Your child needs to go the hospital, we can't treat the problem here,' and they tell us: 'I don't have the 1.40 euros to take the bus and go to the hospital,'" said Liana Maili, a paediatrician at the clinic.
A large chunk of the town's residents live on less than 200 euros ($270) a month, the agency says.
"There are some families that have not had electricity for five, eight months, who spent the winter burning pieces of wood to keep warm and whose children eat from the garbage."
Lately, the clinic has been overwhelmed with vaccination requests for Greek children whose parents cannot afford booster shots - something the agency has only ever seen in the developing world, said Nikitas Kanakis, head of the agency's Greek arm.
"We will need the help of other organizations as we are in a humanitarian crisis," he said.
FOOD PARCELS
Greece is struggling through a debilitating debt crisis that has forced it to accept financial aid to keep afloat. The aid comes at the price of painful wage and spending cuts that have helped push the country into its fifth year of recession.
Most Greeks have felt the pain of salary and pension cuts and higher taxes, with towns like Perama showing the extremes of a crisis that social workers say has punished the weakest sections of society.
In the clinic's small waiting room, patients outnumber the available seats as they wait to be seen by a doctor or pick up a free meal box of beans, olive oil, pasta and condensed milk.
Unable to find a steady job for five years, Antonis Giatras relies on the clinic to feed his family of five. He recalls once being forced to live in his car and in a cemetery for months when he was homeless with a pregnant wife.
"There are some days when we have no bread, or food," said the 50-year-old Giatras. "My young daughter who goes to school is forced to go some days without taking any food with her."
In a one-room shack with a ceiling damaged by water and held together with bits of rope and wood, 36-year-old Spiridoula Firlemi lives in fear her electricity will be cut off because she cannot pay back power bills of 1,250 euros.
"They'll cut it off. We'll see, maybe I'll get electricity from a neighbor," said Firlemi, who has a 45-day-old baby.
"I can't leave the baby in the cold." ($1 = 0.7509 euros)
Police to 'sweep' Athens and send illegal immigrants to camps
Athens is in turmoil, this time not because of protests but due to the controversy surrounding the imminent deportation of thousands of undocumented immigrants 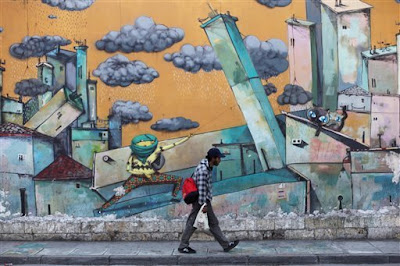 Digital Journal,
29 March, 2012
As Athens News reports, since Thursday the police have launched 24-hour foot patrols on the streets of inner-Athens, seeking to detain immigrants subject to deportation.
21 undocumented street vendors outside the premises of Athens University Law School and the Athens University of Economics and Business and 26 illegal immigrants housed in a building on central Marni Street have been arrested up until now. More police force is bound to be transferred from office duties to street and motorcycle patrols to enhance the “sweeping” of the troubled Greek capital.
The move is part of a general project that aims to have created 35 detention centers with the ability to host 30,000 illegal immigrants by 2014. Greek authorities claim that this way will re-boost Greek economy by opening thousands of local jobs and by decreasing inner-city crime.
"Illegal immigrants should return home," are the words of Michalis Chrysochoidis, Citizen Protection Minister, in an interview he gave on Skai radio station. Chrysochoidis also characterizes illegal immigrations as "a disgrace to the political system" and expresses his concern that if Greece does not implement Schengen measures, it may be forced to leave Schengen, as Nicolas Sarkozy has threatened.
However, internal conflicts are expected to be on the rise in Greece as none of the selected 'host-cities' give their consent to the proposal, viewing it rather as a menace to their well-being . In this sense, Kostas Agorastos, the regional governor of Thessaly, one of the areas selected to accommodate immigrants before their deportation, openly raises his objection to this plan. "We are against this proposal, the public doesn't want it and the local authorities don't want it," Agorastos says.
It should be stressed that Greek authorities have invited television crews to attend the event.
Posted by seemorerocks at 18:35