Australia: Closer military ties with the US

Australia may host US drones at Cocos
A CONTROVERSIAL proposal for a joint Australian-US military air base in the Indian Ocean could lead to the launch of drone spy flights across the region, according to officials quoted in Washington 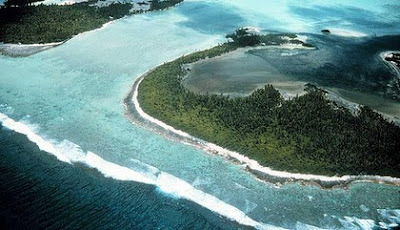 The Age,
28 March, 2012
The proposed base on the Australian-controlled Cocos Islands would form part of a major expansion of ties between Canberra and Washington as the Pentagon looks to shift its forces closer to south-east Asia.
Discussion of the proposal could spark further tensions with China. It comes after the agreement announced by US President Barack Obama and Prime Minister Julia Gillard in November to station up to 2500 US marines in Darwin.
.
The US is also planning to station warships in Singapore and to boost its military presence in the Philippines.
In the latest indicator of the regional push, Australian and US officials have said the Cocos Islands could be an ideal site for US surveillance aircraft, including unmanned, high-altitude Global Hawk drones that could conduct spy flights over the South China Sea.
Although US officials say the push is not aimed at a single country, analysts said it was a clear response to a rising China.
.
Defence Minister Stephen Smith, who has previously confirmed talks with the US about the Cocos Islands' potential, this morning again stressed that any decision, including on the use of drones, was some time off.
"This is very much a long-term prospect, " he told ABC radio.
Mr Smith said that there had not been any recent discussions about the Cocos Islands plan, nor had their been any discussions about the detail.
He said that the priorities at the moment were the rotational arrangements for marines who will be based in the Northern Territory as of next month, as well as greater air and naval access for the US.
In any event, the Cocos Islands airport would require a substantial and expensive upgrade before it hosted any US military aircraft, Mr Smith said.
"Again, I just counsel people, don't get ahead of yourself, whether you are a commentator or an official," he said.
A spokesman for Mr Smith stressed that recent initiatives with the US were ''not directed at China or at any other country''.
''Australia maintains positive and separate relationships with both the US and China and strengthening our relations with one of these countries does not detract from our relationship with the other,'' he said.
The recent moves by the Pentagon tie in with a review of its forces in north-east Asia, where they are concentrated on Cold War-era bases in Japan and South Korea. The intent is to gradually scale back in those countries and expand in south-east Asia, home to the world's busiest shipping lanes and to growing competition to tap into vast undersea oil and gas fields.
''The strategic weight is shifting south,'' said a senior Australian official. ''Australia didn't look all that important during the Cold War. But Australia looks much more important if your fascination is really with the south-east Asian archipelago.''
An interim review of Australia's military basing structure recently concluded that the chances of the country coming under direct military attack were ''currently remote''.
But it urged the government to strengthen its forces along the northern and western coasts, near where most of its mineral wealth is concentrated and its defences are relatively sparse.
The strategic review also advises the government to tailor its basing plans by considering US security interests.
For instance, the review urges a major expansion of the Stirling naval base in Perth, noting that the installation ''could also be used for deployments and operations in south-east Asia and the Indian Ocean by the US Navy''.
Pentagon officials say Stirling could give the US Navy a sorely needed place to refuel, re-equip and repair on the Indian Ocean.
''Australia is the only ally that we have on the Indian Ocean,'' said a senior official.
Prime Minister Julia Gillard, asked last night about the proposed Cocos Islands base, referred to comments by Mr Smith last November, when he foreshadowed greater utilisation of Cocos and more navy visits on the Indian Ocean seaboard.
Speaking to reporters in South Korea, Ms Gillard said there had been no ''substantial progress'' on either matter since November.
She added that Australia had been focused on the deployment of US marines near Darwin. ''Clearly, the alliance we have with the United States is pivotal to our security, it's of long standing and we took the next natural step in my view in the evolution of that alliance last year when I agreed with President Obama that we would host the marines on a rotational basis in the Northern Territory exercises.''
Indonesia responded calmly to talk of US drones using Cocos Islands as a base. Defence Ministry spokesman Brigadier-General Hartind Asrin said Indonesia "shouldn't be suspicious about our neighbours or friends".
He said the increased US military presence in Australia would allow more cooperation between Indonesia, Australia and the US, particularly in disaster relief
Posted by seemorerocks at 14:09