Analysis: Storm clouds gather over Monti's Italy reform drive
Storm clouds are gathering over Mario Monti's efforts to transform the Italian economy, with his approval ratings dropping, mounting protests against his reforms and a damaging row with the parties that sustain him in parliament. 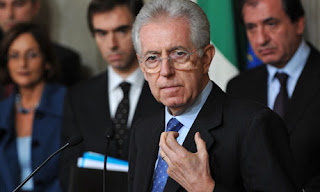 Businessweek,
28 March, 2012.
There may be “down the road, I’m not predicting today when, another restructuring of the outstanding debt,” he said at an event in London late yesterday. “At that time maybe the official creditors need to come into the boat.”
Speaking at the same event at the London School of Economics, Poul Thomsen, the International Monetary Fund mission chief to Greece, said while Greece has made an “aggressive” fiscal adjustment, it will take at least a decade to fully complete the country’s reforms.
Caretaker Prime Minister Lucas Papademos won parliamentary approval on March 21 for a second 130 billion-euro ($173 billion) rescue program. Passage of the legislation moves the country a step closer to elections that may be held as early as next month. Greece pushed through the biggest sovereign debt restructuring in history earlier this month, paving the way for the bailout.
Thomsen said that after the elections, there is “no doubt it will have to reduce its fiscal deficit.” He also said it’s not clear when Greece will be able to return to markets.
“It remains uncertain, with this high level of debt and the risks the program faces because of possible resistance to reforms, when market access will return,” he said. “There’s no room for manoeuver or policy slippage.”
Rescue Funds
The euro rose 0.1 percent against the dollar today and traded at $1.3334 as of 8:06 a.m. in London. It was little sovereign ratings at Standard & Poor’s.
Italian Prime Minister Mario Monti said this week that the euro area’s woes are “almost over” after a slow initial response by policy makers. Still, European governments are preparing for a one-year increase in the ceiling on rescue aid to 940 billion euros ($1.3 trillion) to keep the debt crisis at bay, according to a draft statement for finance ministers.
The euro-area finance chiefs will probably decide at a meeting tomorrow to run the 500 billion-euro permanent European Stability Mechanism alongside the 200 billion euros committed by the temporary fund, a European official said yesterday.
Temporary Fund
Beyond that, they are also set to allow the temporary fund’s unused 240 billion euros to be tapped until mid-2013 “in exceptional circumstances following a unanimous decision of euro-area heads of state or government notably in case the ESM capacity would prove insufficient,” according to the draft dated March 23 and obtained by Bloomberg News.
Thomsen said that while Greece’s fiscal adjustment has been “unprecedented, very impressive, and undoubtedly socially very painful,” a “major adjustment is still needed, of 6-7 percent of gross domestic product.”
Kraemer said that the priority some creditors have been claiming, such as the European Central Bank, is complicating the ability of Greece to lower its borrowing costs and be able to return to bond markets.
“More and more official creditors have been jumping the queue and becoming so called preferred creditors, which means in the case of a restructuring they do not participate,” he said. For “the regular bond holders, the risk increases significantly. That means that the investor will demand a higher interest rate from Greece and that makes it harder for Greece and other countries on the periphery to establish a sustainable debt trajectory going forward.”
Monetary Union
Kraemer said that while making adjustments in a monetary union is “more difficult,” it’s not an impossible task “if the political preconditions and flexibility are there.”
European officials said this week that Greece must step up efforts to tighten the budget and overhaul the economy to prevent the second bailout from collapsing.
“Without a regime change in policy implementation and a much broader political consensus in favor of painful but necessary reforms, there is a high risk that the program derails,” ECB Executive Board member Joerg Asmussen said. “Political courage is needed more than ever.”
Asmussen’s comments were echoed by EU Economic and Monetary Affairs Commissioner Olli Rehn, who said that “challenges remain” as Greece seeks to cut its debt to around 116 percent of gross domestic product in 2020 from more than 160 percent of GDP last year.

Two men torch themselves in Italy as hardship bites
A Moroccan worker in Italy set himself on fire on Thursday in protest at not being paid for months, a day after an Italian businessman set himself alight over a tax dispute, police said

News Daily,
29 March, 2012
The 27-year-old construction worker is recovering in hospital after dousing himself in petrol and lighting it outside Verona city hall in northern Italy, police said.
Police said the man told them he was desperate after not being paid for four months and running out of money.
On Wednesday, a 58 year-old businessman tried to commit suicide by setting himself on fire in his car outside a tax office in nearby Bologna. His appeal against a demand for thousands of euros in allegedly unpaid taxes had been rejected, according to Italian media reports.
He is being treated in hospital for severe burns.
The government of technocrat Prime Minister Mario Monti is cracking down on tax dodging, which authorities estimate deprives Italy of an around 120 billion euros ($160 billion) a year.
Unions say austerity measures, including tax hikes, spending cuts and pension changes, weigh disproportionately on ordinary workers.
Vincenzo Scudiere from Italy's CGIL trade union said the construction worker's self-immolation was a "symptom of the utter exasperation felt by the weakest employees," and warned the government not to underestimate discontent among workers.
The government presented labor reforms last week which face tough opposition from unions that are planning protests and strikes against measures that will make it easier to fire staff.
Sandro Bondi from the large centre-right People of Freedom party said the crisis spared neither workers nor bosses.
"The tragic tale of the businessman ... should help people realize that the divisions between workers and businessmen are a fantasy of the past," he said.

Posted by seemorerocks at 22:20