--Typically excellent reporting from Zero Hedge. But there are several new pieces.
The fact that Azerbaijan has granted Israeli military aircraft to use its bases now makes it possible for Israel to join in air strikes against Iran without having to overfly Saudi or Iraqi airspace.
And the Enterprise is approaching the region. -- I am forced to conclude that the insane bastards are going ahead with the attack... And why not? The world is in the process of dumping the petrodollar. -- MCR
USS Enterprise Prepares To Cross Suez Canal, Days Away From Anchor In Arabian Sea
Zero Hedge,
26 March, 2012
Much noise has been emanating out of Israel vis-a-vis its Iranian intentions, with some opinions suggesting an attack is imminent, while others claiming that Israel will ultimately defer to D.C., and postpone an attack, and the eventual gasoline price shock, until after the election. The truth is nobody but a few select generals, knows: in warfare surprise is the key factor, so outright flashing invasion intentions is usually an indicator of just the opposite. That said, the most recent update that Azerbaijan has granted Israel access to its airbases along the Iran border is hardly encouraging for Nobel peace prize winners and other pacifists. Yet as we have been claiming for the past two weeks, ever since the launch of CVN-65 on its last tour of duty, the true catalyst, if any, will be the arrival of the USS Enterprise at what may well be its last place of anchor - somewhere in the Arabian Sea, just off the side of CVN 70 and CVN 72 both of which are patrolling the Straits of Hormuz. And as the map from Stratfor below shows, the Enterprise is about to cross the Suez Canal, from which point it will be at most days from entering its catalyst location, namely supporting the Israel air force. Just because the US has never had 3 concurrent aircraft carriers in proximity to Iran before. 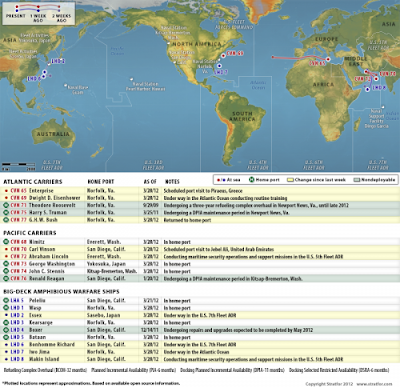 Below is a video released two days ago showing the Enterprise conducting a maneuvering exercise in the Mediterranean sea:


And as a reminder, once CVN-65 is parked and on location, here are the windows of opportunity for Iran.
1001 Moonless Kinetic Nights: Presenting The Windows Of Opportunity For An Iranian Attack
Following last Friday's majority vote by the Israel Security Council authorizing Iranian "action" when required, answering the "if", the only open question remains "when." As it turns out, based on the following analysis by Rapidan Group, there are only 10 or so distinct 10 day New Moon windows for the remainder of 2012. If one removes the sandstorm prone months of April, July and September, there are 7 periods in which a military strike is realistic. Also CVN 65 is moving at a snail's pace and is just now approaching the Straits of Gibraltar.  Since any action will likely not take place unless 3 aircraft carriers are in the vicinity, and because the ICE yesterday instituted ultra-short term trading spike curbs in crude, starting April 1, one can likely eliminate the immediately proximal March 17-27 window. Which leaves six. Our advice would be to buy up OTM calls in Brent in the days just ahead of the start of any such window, as any "surprise" attack will have a uplifting impact on all combustible assets, doubly so for levered ones.
From Rapidan Group
Timing Considerations
Based on press reports, officials see high odds of an attack sometime between 2Q12 and the end of the year, with most pointing to 2Q or 3Q.
If Israel elects to conduct a conventional military strike, the optimal conditions would be moonless and cloudless nights. “Operation Orchard,” Israel’s attack on Syria’s reactor at Al-Kibar on Sep 6, 2007, took place 5 days before the new moon. This suggests windows starting about 5 days before a new moon and ending five days after - see the table below. Low humidity is also ideal, but not required.
Attackers would want to avoid sandstorms, which have afflicted Iran in April, July, and September in recent years. Last year, a large sandstorm in mid-April hit 20 provinces, forcing the shutdown of schools and businesses. Sandstorms are visible and predictable, however, and would be taken into account by planners.
For non-kinetic options, climate is not a consideration to our knowledge. Presumably, they would be tried before kinetic ones and only after leaders were convinced Iran had not yet felt enough pain to compel it to freeze enrichment.

A Disastrous War Game Changed America's Strategy For Iran
The political and media frenzy that focused on Iran, Israel and U.S. forces near the Strait of Hormuz has appeared to mellow over the past few weeks, but just because it's not in the headlines doesn't mean it's over. 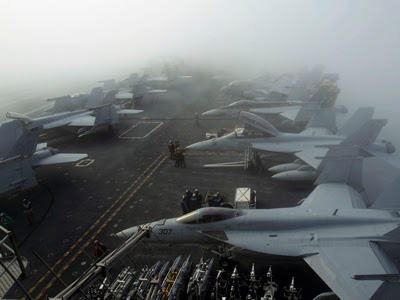 Business Insider,
29 March, 2012
The tensions really started flaring up in late December when Iran held a massive Naval exercise near the Strait, threatened to mine it, and choke off 40 percent of the global oil supply.
Since then, U.S. officials like Secretary of Defense Leon Panetta and President Obama himself, have said that the U.S. will not allow Iran to achieve a full fledged nuclear program capable of creating a nuclear weapon.
Israel has also said it cannot abide a nuclear Iran, and rumors of them going it alone against Tehran filled headlines as recently as a couple of weeks ago.
But that all seems to have changed after the major U.S. war game "Internal Look," which Pentagon brass used to understand what might happen if Israel were to attack Iran on its own.
This go-round of the huge war game showed that an Israeli attack would be the first step in a regional war that may pull in the United States and leave hundreds of American soldiers dead.
The findings seem to have derailed Israel's initial drive to take on Iran alone, and Amir Oren at Ha'aertz reports today that Inside Look has put off an Israeli attack on Iran until early next year, at least until spring 2013.
This could allow both the U.S. and Israel to rally support to a few key areas like Israel's Iron Dome missile defense system, used for short-range missile attacks. The Iron Dome didn't perform as well as hoped in recent tests, and the U.S. recently promised to provide additional funding to improve and expand its capabilities.
It could also give Israel time to install itself on a newly purchased airbase at Iran's northern border, so that its fighters won't have to rely on mid-air refueling during any sorties flown to Tehran.
And it could give the U.S. a bit of time to upgrade its fleet of B-2s, the only plane capable of carrying the 30,000 pound bunker buster bomb called the Massive Ordnance Penetrator needed to strike Iran's underground bunkers.
Congress urgently passed $82 million in further funding for an enhanced MOP in February, looking to enhance the penetration capabilities it will need to hit fortified underground targets set as deeply as Iranian nuclear facilities, for instance.
The 2013 timeline would also allow the U.S. to pull as many troops as possible out of Afghanistan and consolidate its attention on an Iran campaign that, if it happens, promises to be a complex, dangerous, and very costly endeavor.
Posted by seemorerocks at 11:50