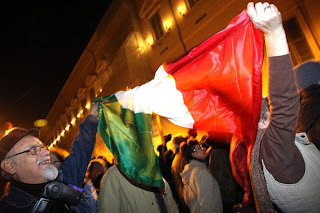 News Daily,
28 March, 2012
The proposed labor reforms, including changes which would make it easier for companies to fire workers, have already prompted the CGIL union to call a general strike, although no date has been set.
Monti, appointed in November as market turmoil threatened to engulf Italy in a Greek-style debt crisis, has pledged to push through far-reaching reforms to the euro zone's third largest economy before new elections in 2013.
His efforts to kickstart growth needed to reduce Italy's debt mountain are being closely watched by financial markets and by its euro zone partners, who could not afford to bail out the country if it lost access to international markets.
Next month's rally has been called to protest against pension reforms which have already been passed and the unions have still not decided a common line on the labor reform issue, but Camusso said there was deep discontent over the proposals.
"The situation in Italy is very serious and Italians are nearing their limit," Camusso told a meeting with foreign journalists in Rome. "Our country is living in fear."
The other two federations, the CSIL and the UIL, have criticized parts of the reforms but the CGIL is the only one of the three big labor groups planning to strike against changes it says will lead to "easy firing".
UILM, the engineering section of the UIL federation, said on Wednesday it would hold a four hour strike of its own, however.
The union campaign will come as the reform bill goes through parliament, where the centre-left Democratic Party (PD) has pledged to defend provisions that guarantee reinstatement for workers deemed to have been unjustifiably laid off.
That has pitted it against the centre-right PDL party, which also backs Monti's unelected government of technocrats but which wants to see the reforms passed unchanged, increasing political tensions ahead of city council elections on May 6-7.
The local balloting will be the first test of voter support for the parties since they agreed to back Monti four months ago in a bid to shore up investor confidence.
SAFEGUARD
The job protection measure that Monti's reform would alter dates back to the height of 1970s labor power in Italy and is known as Article 18 of the labor statute.
The proposed change to job protection rights is just one part of a package of labor reforms, but has come to symbolize a battle over the future of industrial relations in Italy.
Camusso said the change the PD wants to make to the proposal would make the overall package acceptable to the CGIL.
"If parliament comes up with a solution that includes reinstatement as a deterrent for all the motivations used to fire workers, then we will be able to say that we've safeguarded the fundamental spirit of Article 18," Camusso said.
Monti was appointed in November to succeed scandal-plagued premier Silvio Berlusconi amid financial market turmoil that saw Italy's borrowing costs shoot up to unsustainable levels. Mounting resistance to the labor proposals has since dented his approval ratings.
A survey by IPR polling company published on the left-leaning La Repubblica daily's web site on Wednesday showed his approval rating falling from 59 percent to 55 percent in the space of a month.
The reforms are intended to overhaul labor market rules that offer iron-clad guarantees to those on permanent contracts but leave a growing army of mainly younger workers condemned to a succession of insecure, temporary jobs.
The government says the rules have contributed to the low level of Italians in full-time employment because they discourage companies from taking on permanent staff who are then difficult to lay off in lean times.
Posted by seemorerocks at 16:44