-- All of the damaged reactors at Fukushima require close quarter, constant attention to prevent them from going critical. Water must be pumped in (from Diesel or fuel-oil or natgas generation), Heavily damaged buildings require constant maintenance and exposed reactor cores inside damaged or compromised containment vessels must be cooled and monitored.
As we noted yesterday, radiation levels are now so high as to cripple (kill) even robots quickly. What that means is that the region is contaminated for 100,000 years and it seems inevitable that all four reactors at Fukushima are going to share the same fate. No one even comprehends the amount of radiation that will be released. As our coverage and reporting has noted over the last year, that much radiation is a threat to all life on the planet. Not next month. Not next year or in five years... Right now. -- MCR
Still critical: radiation levels at Fukushima can kill in minutes
Latest readings from tsunami-stricken nuclear plant overturn claims that reactors have been made safe 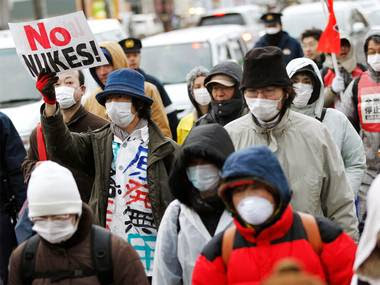 the Independant,
29 March, 2012
A lethal level of radiation has been detected inside one of the reactors at the Fukushima nuclear power plant, throwing fresh doubts over the operator's claims that the disabled complex is under control.
Engineers for Tokyo Electric Power Co (Tepco) say readings of airborne radiation inside the containment vessel of Reactor 2 showed nearly 73 sieverts per hour this week, the highest since the crisis began following the earthquake and tsunami on 11 March last year. Exposure to radiation at that level is deadly within minutes, according to Japan's public broadcaster, NHK.
Tepco said the find would have "no impact" on the company's long-term plans to decommission the plant's six reactors. "We were not surprised that the radiation was this high because the reading was taken from inside the pressure vessel,"a spokesperson said.
Tepco announced in December that the Daiichi complex had achieved a state of cold shutdown, meaning that radiation emissions are under control and the temperature of its 260 tons of nuclear fuel has stabilised below boiling point. The company plans to remove the fuel and dismantle the plant's steel and concrete structure – a task it estimates will take decades.
But engineers have only a rough idea of where the melted fuel inside three of the six reactors is, or how badly it has corroded the base of the reactors and their containment vessels. Reactors 1 and 3 are too badly damaged to allow close inspection, while engineers had to use modified equipment to peer inside Reactor 2 this week for only the second time since the earthquake.
Workers are able to work near Reactor 2 only for short periods and Tepco says it will need to develop devices to withstand the harsh conditions inside.
In addition, an industrial endoscope inserted into the reactor's containment vessel on Monday found only 60cm of water inside, far below the three to six metres expected. Tepco – which has poured thousands of gallons of water on to the crippled reactors in an effort to keep the fuel cool – insists that, despite the low level, the melted fuel is underwater "judging by the temperature of 48.5C to 50C".
Critics say the fresh findings illustrate the still precarious state of the complex. "The problem for Tepco is that the damage is so severe to the base of the reactor, and the amount of water is so low, that any interruption to the water pumping could be serious," said Shaun Burnie, an independent nuclear consultant. Mr Burnie said the company must get more water on to the melted fuel and stop contamination from making its way into the environment.
The difficulties of that process were illustrated again this week when the plant's makeshift cooling system sprang another leak. Workers estimate that about 80 litres of contaminated water escaped from pipes carrying water to and from the Pacific. The build-up of toxic water is another major headache for Tepco, as the company is running out of space to store it.
The struggle to decommission the Daiichi plant continues as a potentially epic battle looms between pro- and anti-nuclear forces. Only one of Japan's 54 reactors is still online after Reactor 6 of the world's largest nuclear complex, Kashiwazaki-Kariwa, shut down for maintenance earlier this week.
With Japan's nuclear power capacity down to less than two per cent, from 30 per cent, the Government and businesses fear a summer power crisis unless idling plants are restarted. However, each plant needs approval from sceptical local communities, and post-Fukushima surveys put opposition to nuclear power in Japan at around 80 per cent. Public fears have forced regulators to order tests to determine whether the plants will stand up to another large earthquake or tsunami.
Tepco's disgraced executives also face a 5.5-trillion-yen (£42bn) lawsuit by shareholders. "The company repeatedly ignored tsunami and earthquake research showing that the plant would be overwhelmed," said lead lawyer Hiroyuki Kawai this week. "The plant was run haphazardly and carelessly."
The disaster: How it unfolded
Cooling systems down
The 9.0-magnitude earthquake and a tsunami more than 15 metres tall knocked out cooling systems at the six-reactor plant. Meltdowns are believed to have occurred at reactors 1, 2 and 3.
Explosions and radiation leaks
Hydrogen explosions occurred at the No 1 and No 3 reactor buildings a few days after the quake. Radiation leaks forced some 80,000 residents to evacuate the immediate area and more fled voluntarily.
Spent-fuel pool catches fire
Reactor No 4 was under maintenance and 550 fuel rods had been transferred to its spent-fuel pool, which already contained about 1,000 fuel rods. The pool caught fire and caused an explosion.
Cold shutdown
Reactors 5 and 6 reached cold shutdown (meaning water used to cool the fuel rods fell below boiling point) 10 days after the tsunami – but it took more than nine months to achieve that at reactors 1, 2 and 3.
Posted by seemorerocks at 09:02