US negotiating with Taliban

-- The U.S. is dealing. And now comes, perhaps, an answer to the question of why those detained for as long as a decade in Guantanamo were so important. They were hostages to be traded for the lives of coalition forces. Whether by intent or necessity, that's the way it's playing out. That is the way wars were fought long ago. There are some bad-ass negotiations going on. -- MCR
U.S. may accept less stringent controls for Taliban detainees
The Obama administration has signaled a willingness to accept less-stringent controls on former Taliban leaders who could be transferred to Qatar as part of a deal between the United States and the Afghan militants to kick-start Afghan peace talks, U.S. officials said. 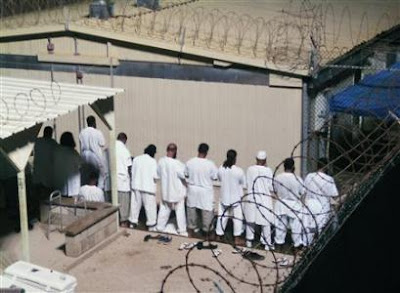 Reuters,
29 March, 2012
The administration, in negotiations led by the Defense Department, has indicated to Qatar that it would be willing to transfer five Taliban detainees now at the Guantanamo Bay, Cuba, prison to the Gulf emirate on condition that Qatari authorities provide assurances the men would not be allowed to leave Qatar, the officials said.
In indicating that it would expect Qatar to restrict the travel of the Taliban leaders, the United States has also signaled that it is willing to forgo tighter restrictions which it had originally discussed with the Qataris, such as imprisonment, house arrest or continuous monitoring by security forces.
Administration officials insist, however, that they will only agree even to the less onerous restrictions on the transferred prisoners if they believe the arrangements will serve U.S. counterterrorism objectives adequately. "The goal is for detainees not to have the option to return to the fight," a U.S. official said.
While the restrictions the Obama administration is willing to accept are less than it first demanded, a U.S. official familiar with the issue said that Qatar is nonetheless balking at agreeing to restrict the Taliban detainees' travel. U.S. officials say the Taliban are also rejecting the notion that detainees transferred from Guantanamo to Qatar should be subjected to any restrictive conditions.
These diplomatic complications, U.S. officials said, are causing temporary deadlock in negotiations between Washington and Qatar, as well as stalling broader peace discussions between U.S. and Taliban negotiators.
"The prospect of detainees returning to the fight is problematic - it's a very strong concern," the official said.
The hoped-for peace talks between the U.S.-backed government of Afghan President Hamid Karzai and the Taliban have emerged as a key part of President Barack Obama's strategy for stabilizing the country. Most foreign troops are scheduled to leave by the end of 2014.
MINIMAL CONTROL
U.S. officials, who asked for anonymity when discussing a sensitive topic, said that despite the hiccups, negotiations with Qatar are continuing, as is the broader peace effort. George Little, a Pentagon spokesman, declined to comment.
However, Obama's political opponents, who have questioned his efforts to negotiate any kind of accommodation with Afghan Taliban, are expected to step up their criticism if Taliban detainees are moved to Qatar under conditions of minimal control.
Officials said U.S. intelligence agencies, in non-public reports, have already criticized Qatar for loosely and ineffectively keeping tabs on militant ex-detainees transferred to them by U.S. authorities.
U.S. officials said the conditions under which the Taliban detainees would be transferred to Qatar is the sole remaining stumbling block in a larger diplomatic package that the United States has been discussing with authorities in Doha regarding the possible Taliban transfer.
Some officials said that in initial discussions with Qatar, the U.S. government had discussed tighter restrictions which might be placed on Taliban detainees who could be transferred to the country. The officials said the U.S. position subsequently changed. A spokesman for the Qatari Embassy in Washington did not respond to a request for comment.
Defense Secretary Leon Panetta, who must personally vouch for the transfer, is taking a personal interest in both the Taliban transfer plan and details of the negotiations with Qatar, officials said.
By law, the administration must provide formal notification to U.S. lawmakers 30 days in advance of any detainee transfers such as the proposed Taliban deal. So far no such notification has been given.
Under current law, lawmakers have no power to block any prisoner transfers. The only legal means Congress would have to halt proposed transfers would be to pass new legislation banning them, which would be subject to a possible presidential veto.
Nonetheless, in an election year, a detainee transfer deal in which former prisoners would not be under tight supervision could provide Obama's political rivals with fodder for criticizing his counterterrorism policies.
Some congressional critics have already raised questions about the publicly known details of the proposed transfer of Taliban detainees. Previously classified Pentagon dossiers on the detainees which were made public by WikiLeaks suggested that some of the five detainees have histories of particularly violent or anti-American activity.
Official sources indicate that one of the detainees, Mullah Mohammed Fazl, is alleged to have been responsible, as a top Taliban military commander, for killing thousands of Afghanistan's minority Shiites.
Posted by seemorerocks at 21:43