BRICS stand up to rich countries

Brazil to rally BRICS against rich countries
Brazil will push for its large emerging-market peers including China to denounce what it sees as unfair monetary policies by Europe and the United States, raising the stakes in a global confrontation over economic imbalances. 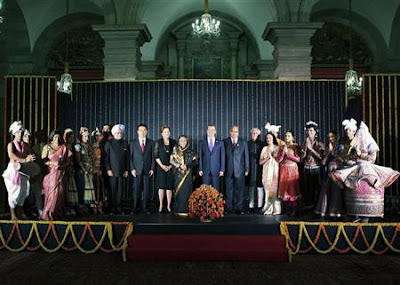 Reuters,
28 March, 2012
Brazilian Trade and Industry Minister Fernando Pimentel told Reuters on Wednesday his country would seek such language in a communique at this week's BRICS summit, which brings together Brazil, Russia, India, China and South Africa.
Pimentel said that China had previously been cautious about supporting language on global monetary imbalances "because they thought we could be indirectly referring to them."
Many analysts believe that Beijing artificially manipulates its currency but Pimentel said the biggest policy problems now are in the rich world.
"Today's (problem) doesn't have to do with China," he said in a 30-minute interview on the eve of the summit in New Delhi. "It has to do with the dollar and the euro."
Pimentel also gave details of a new initiative to reduce business costs for Brazilian exporters and importers, and explained how his country will seek to address alleged global economic imbalances before the World Trade Organization.
Brazil accuses rich countries of causing a "monetary tsunami" by engaging in expansionist policies such as low interest rates and bond-buying programs.
The policies are designed to stimulate the troubled U.S. and European economies, but have also unleashed a wave of global liquidity that has poured into emerging markets like Brazil, driving up their currencies and making their economies less competitive abroad.
Pimentel said that the five emerging markets that make up the BRICS, a disparate group that often struggles to find common ground on a wide array of issues, "have more or less the same vision on this matter."
"I think there's going to be a mention of this (in the communique), for sure," Pimentel said.
A united front among the BRICS is unlikely to persuade rich nations to change their monetary policies. But it could give Brazil and other countries critical political cover to seek palliative action by raising their tariffs or pursuing change at global bodies like the WTO. Brazil is spearheading a discussion on currencies this week at the Geneva-based body.
Brazil, whose economy has slowed sharply over the past year, has become one of the leading activist voices on what it sees as unfair global trade imbalances. Its words and actions, amplified by its status as Latin America's largest country and the world's No. 6 economy overall, have raised fears of growing protectionism among emerging markets.
Brazil has blamed the global liquidity glut for making its currency one of the world's most overvalued. As local industries struggle, its economy grew only 2.7 percent in 2011, below its BRICS peers and down from a blistering 7.5 percent in 2010.
Critics say that Brazil, and its left-leaning President Dilma Rousseff, are using rich countries as a scapegoat for their own inefficient industries and other problems at home. High taxes, labor costs and poor infrastructure have contributed to making Brazil one of the world's most expensive and difficult places to do business.
NEW PLANS TO HELP EXPORTERS
Pimentel, who is one of Rousseff's most trusted aides, denied that Brazil is leading an "outbreak of protectionism" and insisted that all its actions to date have been within the parameters of the WTO.
He described Brazil's decision in February to renegotiate a tariff-free auto trade deal with Mexico as unique, and said there were no similar actions planned going forward.
Instead, Pimentel said Brazil is seeking changes at the WTO that would allow for countries to protect themselves against others that keep their currencies artificially weak, giving them an unfair advantage in trade.
He said that the 35 percent maximum tariff allowed by the WTO is based on an outdated framework for the global economy, back when many currencies had fixed value, and that it no longer allows for sufficient protection.
"Currencies have an effect on foreign trade," Pimentel said. "When the (35 percent tariff) was thought up in the 1950s, it was an absurd (high) number. Today, it's nothing. Today, a poorly balanced exchange rate easily sterilizes that 35 percent."
While he said that Brazil will not seek an increase in the maximum allowed tariff, other "mechanisms" are possible. One solution, he said, would be to allow countries to apply a "surcharge" or penalty to imports from countries that are found to be keeping their currencies artificially weak, or whose currencies depreciate a certain percentage over time.
"That's purely an example," he said. "There are other possibilities."
In the meantime, Pimentel said Brazil will explore ways to reduce costs for beleaguered local industries.
He revealed that Rousseff is exploring the creation of a so-called "single-window" system that would reduce red tape for exporters and importers.
Companies currently have to seek approval from as many as 17 different government bodies to get approval to send goods out of Brazil, or bring them in, Pimentel said. The initiative seeks to establish a single body that would oversee such transactions.
Pimentel said it could go into effect as early as the second half of 2012 and that much of the transformation could be accomplished via presidential decree, while some changes would have to through Congress.
If it goes through, the measure would mark one of the most significant efforts by Rousseff's government to reduce business costs since it took office in January 2011.
"It'll make everything faster," Pimentel said. "We're going to put everything in one place."
"So you see," he continued, "we're not creating barriers. We're not with this spirit of trying to make things more difficult. But, within the rules of the WTO, we're going to do everything we can to defend our market."
From RT