What is it about those who are responsible, not only for research, but for communicating the state of knowledge of climate change have changed their tunes and have toning everything down to look as if their is no urgency.

I just can't figure it out.

Last night I went to a screening of the film, "Thin Ice" that was made in 2009 as a joint production of Victoria University (Wellington) and Oxford University.

It was indeed a very interesting film that showed climate change research in Antarctica while bringing together the voices of people from differing disciplines. Two of the specific things I carried away with me was someone in the film talking about positive, self-reinforcing feedbacks and another scientists expressing their feeling that the computer modelling was too conservative, something that has been demonstrated in spadefuls in the intervening years.

I was absolutely flabbergasted by the transition from a fairly honest film in which people expressed themselves freely to what I took to be a locked- down atmosphere in which some are recanting from previously well-thought-out positions.

Prof. Barrett, after the film did a climate update in which, apart from mentioning that we have hit 410 ppm of CO2 (only a mention without any explanation) and was at pains to point out that the media goes for sensationalist stories without reflecting the whole of what is in the scientific papers.

This was followed by a managed discussion which suddenly jumped to what the public can do – of the ‘change your lightbulbs, buy an electric car’ variety.

I managed to get in with my fairly mild comments in which I evoked Prof Trenberth to illustrate how global temperatures have increased since 2009 and made the simple points that with (allegedly} flatlining emissions concentrations of greenhouse gasses are going up rapidly while there is a 10-20 year lag time between emissions and consequent warming, meaning we have a lot of warming baking in the oven.

Prof. Barrett was at pains, without questioning Trenberth, to point out that temperatures are still increasing in a nice linear way (my words) at about 0.1C per decade. He also said that increases were less than what I was saying by evoking the sleight-of-hand that jumped from measuring the temperature from the beginning of the industrial era (as previously) to 1950.

After Guy McPherson’s last tour in November I was moved to write a response to comments that were made about him by Prof. James Renwick in which I mentioned Prof. Barrett and 2004 comments that he had made about climate change leading the extinction by the end of the century.

A comment that he made on my blog made it clear that he wanted to distance himself from his earlier comments (whether extinction or ‘civilisation as we know it’).

"He will also find himself in conflict with his colleague, emeritus professor Peter Barrett who, back in 2004, was forced to recant his contention that global warming will result in extinction because of the objections of people like Renwick."

This is not true. You've made up this story. Do you make a pratice of this? The "extinction" statement was in the first draft of my short speech and sent to a Christchurch reporter that I trusted under a 24 hour embargo the day before the Royal Society's award ceremony.

On further reflection I changed the text to "the end of civilisation as we know it" and that was in the speech I gave on the night. Sadly the reporter sent it through for publication the night I sent it and it had gone to press by the time I sent him the updated version.

So no coercion by anyone....

He says that "made the story up", when I was just evoking a NZ Herald article by journalist,Simon Collins - which is below. 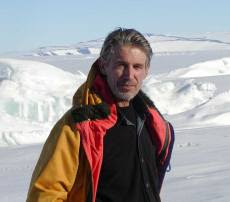 The winner of one of New Zealand's top science medals, Professor Peter Barrett, has backed off a controversial claim that humanity faces extinction within 100 years because of global warming.

Dr Barrett, who was presented with the Royal Society's Marsden Medal in Christchurch last night, gave the Christchurch Press notes for his acceptance speech in which he planned to say: "If we continue our present growth path we are facing extinction - not in millions of years, or even millennia, but by the end of this century."

After a storm of criticism, he changed the word "extinction" in his speech last night to "the end of civilisation as we know it".

Dr Barrett, 64, the director of Victoria University's Antarctic Research Centre, has used ancient air particles trapped in Antarctic ice to show changes in carbon dioxide are linked with changes in the polar ice sheets and the Earth's climate. His work has been widely cited in the world's scientific journals.

But his own colleagues were embarrassed yesterday after his initial speech notes were reported.

"I certainly wouldn't be using that language," said Dr Jim Salinger, the lead author for the Australia and New Zealand chapter of the next global assessment by the Intergovernmental Panel on Climate Change.

Dr Tim Naish of the Institute of Geological and Nuclear Sciences, who has worked with Dr Barrett in Antarctica for many years, said he talked to him at length after his speech notes were reported and said, "I don't think he meant to say that in 100 years we'll all be gone.

"I personally, and I think the majority of scientists, would find his comments, as they were reported, hard to defend from a scientific basis," Dr Naish said.

Auckland engineer Bryan Leyland, a climate change sceptic, said small ice sheets had melted but there was no evidence the rest of Antarctica was warming.

Dr Salinger said Antarctic ice showed that carbon dioxide ranged between 180 and 280 parts per million during natural cycles caused by changes in the Earth's orbit over the past 400,000 years, but had now reached 374 ppm.

Dr Barrett said smaller climatic changes had destroyed past civilisations and humanity could not run the risk of rising carbon dioxide levels.

"The last time carbon dioxide levels were this high was before humans evolved," he said


Global warming 'set to speed up to rates not seen for 1,000 years'

It had puzzled me why he was so anxious to ‘put the record right’ but after last night I began to have some insights about this strange change in stance in the face of accelerating, non-linear climate change.

Last night there was no ‘end of civilisation as we know it’, let alone extinction by the end of the century. Rather, what I saw was a kind of airy optimism that I suspect might cover up a quiet devastation that the scientists have not been listened to and their warnings not heeded. Why pretend that things are still going on pretty much as they were back in 2009 (remember, this was before the 6 dozen positive feedbacks that we have now)?

There was a solid determination to keep things within bounds, to keep it local (what is Antarctica's contribution to climate change, how can New Zealanders "do their bit" in the face of a government and media that has little interest). What, I asked, has happened to global warming?

Instead we have to get our emissions down and to get CO2 out of the atmosphere.How are we going to do that? Plant trees (while we drive around in our electric cars). All that in the face that we know that the lungs of the planet, the Amazon rainforest is rapidly losing its ability as a carbon sink and that forests around the world are burning releasing huge amounts of carbon into the atmosphere. That point was not needed in the managed discussion and was quickly deflected.

Why the change in attitude? Why move from a position of accepting collapse of human civilisation (I won’t say extinction) to one of relative optimism just when things are getting much worse almost as you read this article. Is Prof. Barrett so locked in his speciality that he is unaware of other research (as well as events-on-the-ground)? Is it a position to cover up a deeper sense of desperation?

Prof. Barrett is, after all professor emeritus – he’s retired – and as such is not beholden to anyone for a salary and so could, if he so desired, tell us the pure , unalloyed truth of the predicament that faces the human species.

I have no (or little) objection to people having their own responses and feelings (even thinking we're going to survice in nuclear submarines).  One thing I do insist  on thought, is the truth about the science and what it tells us.

I was very much reminded of an old Soviet joke about a train locked in a snowdrift - “comrades, pull the curtains and let’s pretend we’re moving” or Mike King’s comments about why he resigned from NZ Suicide Prevention External Advisory Panel (suicide rates double of what they were claiming, the whole thing was a talkfest.

What is needed is, above all truth. Not a massaging of the facts to avoid “frightening the horses”. Last night could not have been further from that.

It makes me all the more determined until my dying breath, to be an inconvenient voice asking the questions that are needed and questioning authority.

Here I discuss with Guy McPherson the attacks on him by Prof. James Renwick