But the Russians are war criminals, aren’t they? This doesn't even include Iraq. 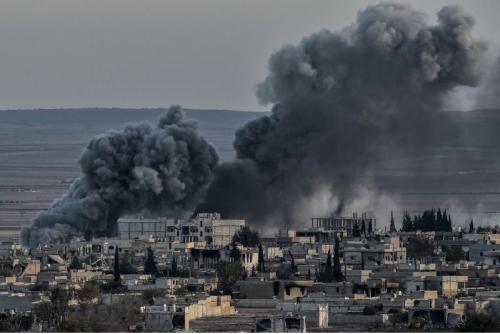 Coalition-led airstrikes in Syria killed a total of 225 civilians between April 23 and May 23, the highest 30-day death toll for U.S.-led forces since the campaign began, Agence France-Presse reported. That's nearly double the number of intended targets: The U.S.-led strikes killed 122 ISIS fighters and eight fighters loyal to the Syrian government, the report said.

The rising tide of civilian deaths attributable to coalition forces suggest that May could be the fifth straight month that civilian deaths from coalition-led strikes outpace the civilian death toll from Russian forces, according to the AFP report and an analysis of data from Airwars.org.

Of the 225 civilian deaths, reported to AFP by the Syrian Observatory for Human Rights, 44 were children and 36 were women.

The civilian death toll from Russian strikes has declined since it peaked in January. Meanwhile, deaths from U.S.-led strikes have risen dramatically.

The previous deadliest 30-day period for U.S.-led forces was between February 23 and March 23 this year, when 220 civilians were killed, Abdel Rahman told AFP.

The past month's deaths brought the overall civilian toll from the coalition campaign to 1,481, among them 319 children, AFP reported.

The coalition launched operations against ISIS in Iraq in August 2014, then expanded them to Syria the following month. The Russian intervention began a year later.

However, the rising tide of casualties relative to intended targets could soon shift as the US Military implements a new strategy ordered by President Trump that's designed to annihilate ISIS in Syria in an effort to prevent foreign fighters from returning home. Defense Secretary Jim Mattis said Trump's order for the military to change up its plans for dealing with ISIS has led to a“tactical shift from shoving ISIS out of safe locations in an attrition fight to surrounding the enemy in their strongholds so we can annihilate ISIS.”