Less than an hour after Trump once again paraded with yet another all-time high in the S&P...

19.4K people are talking about this

... and on day 510 of the trade war, it appears the president was confident enough that a collapse in trade talks won't drag stocks too far lower, and moments after futures reopened at 6pm, the White House said that Trump had signed the Hong Kong bill backing pro-democracy protesters, defying China and making sure that every trader's Thanksgiving holiday was just ruined.
In a late Wednesday statement from the White House, Trump said that:

I signed these bills out of respect for President Xi, China, and the people of Hong Kong. They are being enacted in the hope that Leaders and Representatives of China and Hong Kong will be able to amicably settle their differences leading to long term peace and prosperity for all. 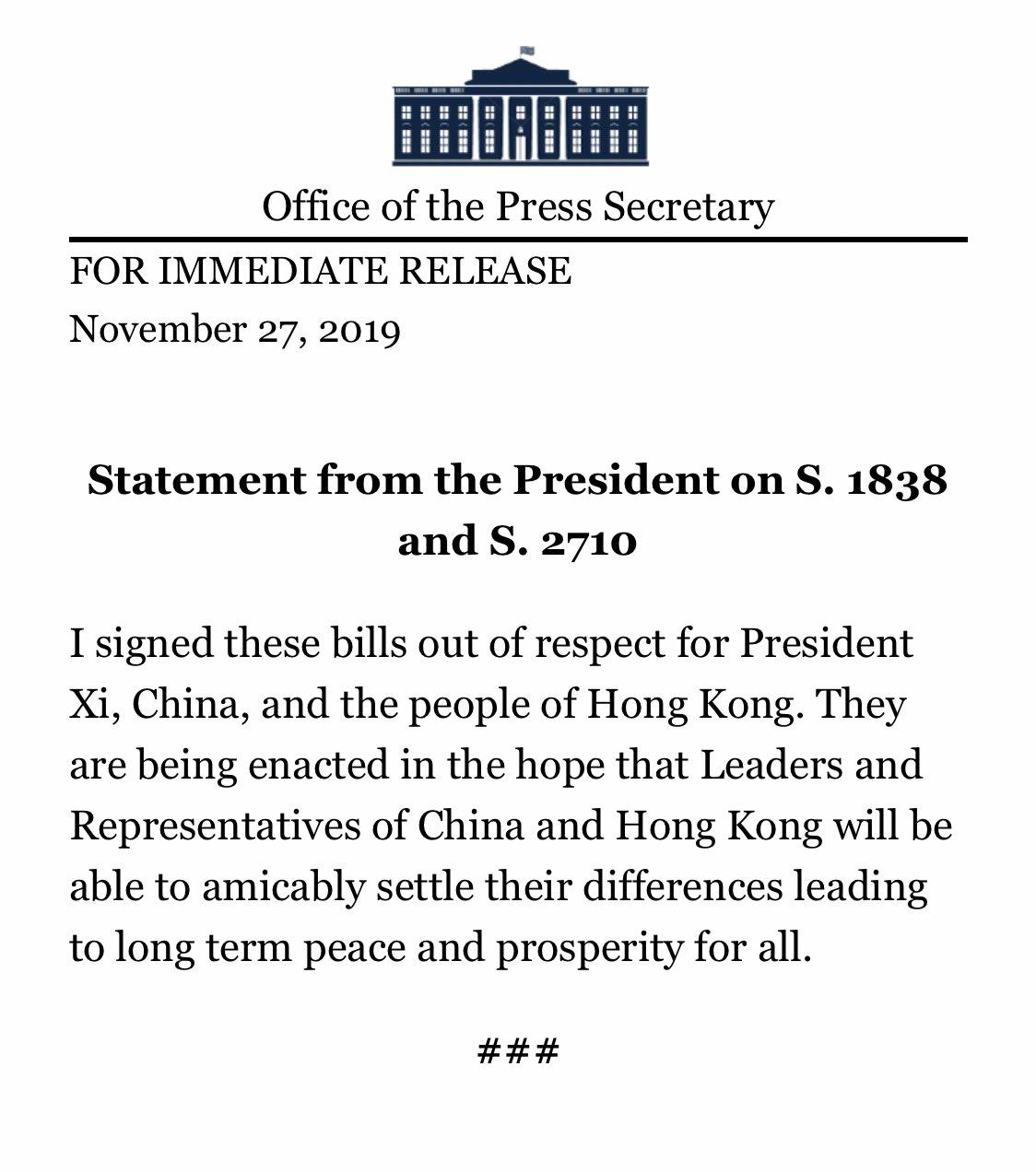 Needless to say, no differences will be "settled amicably" and now China will have no choice but to retaliate, aggressively straining relations with the US, and further complicating Trump's effort to wind down his nearly two-year old trade war with Beijing.
Trump’s signing of the bill comes during a period of unprecedented unrest in Hong Kong, where anti-government protests sparked by a now-shelved extradition bill proposal have ballooned into broader calls for democratic reform and police accountability.
“The Hong Kong Human Rights and Democracy Act reaffirms and amends the United States-Hong Kong Policy Act of 1992, specifies United States policy towards Hong Kong and directs assessment of the political developments in Hong Kong,” the White House said in a statement. "Certain provisions of the act would interfere with the exercise of the president's constitutional authority to state the foreign policy of the United States."
The legislation, S. 1838, which was passed virtually unanimously in both chambers, requires annual reviews of Hong Kong’s special trade status under American law and will allow Washington to suspend said status in case the city does not retain a sufficient degree of autonomy under the “one country, two systems” framework. The bill also sanctions any officials deemed responsible for human rights abuses or undermining the city’s autonomy.
The House cleared the bill 417-1 on Nov. 20 after the Senate passed it without opposition, veto-proof majorities that left Trump with little choice but to acquiesce, or else suffer bruising fallout from his own party. the GOP.
Trump also signed into law the PROTECT Hong Kong act, which will prohibit the sale of US-made munitions such as tear gas and rubber bullets to the city’s authorities.
While many members of Congress in both parties have voiced strong support for protesters demanding more autonomy for the city, Trump had stayed largely silent, even as the demonstrations have been met by rising police violence.
Until now.
The bill’s author, Senator Marco Rubio of Florida, said that with the legislation’s enactment, the US now had “new and meaningful tools to deter further influence and interference from Beijing into Hong Kong’s internal affairs.”
In accordance with the law, the Commerce Department will have 180 days to produce a report examining whether the Chinese government has tried use Hong Kong’s special trading status to import advanced “dual use” technologies in violation of US export control laws. Dual use technologies are those that can have commercial and military applications.
One other less discussed but notable provision of the Hong Kong Human Rights Act targets media outlets affiliated with China’s government. The new law directs the US secretary of state to “clearly inform the government of the People’s Republic of China that the use of media outlets to spread disinformation or to intimidate and threaten its perceived enemies in Hong Kong or in other countries is unacceptable."
The state department should take any such activity “into consideration when granting visas for travel and work in the United States to journalists from the People’s Republic of China who are affiliated with any such media organizations”, the law says.
* * *
In the days leading up to Trump's signature, China’s foreign ministry had urged Trump to prevent the legislation from becoming law, warning the Americans not to underestimate China’s determination to defend its “sovereignty, security and development interests.”


"If the U.S. insists on going down this wrong path, China will take strong countermeasures," said China's foreign ministry spokesman Geng Shuang at a briefing Thursday in Beijing. On Monday, China's Vice Foreign Minister Zheng Zeguang summoned the U.S. ambassador, Terry Branstad to express “strong opposition” to what the country’s government considers American interference in the protests, including the legislation, according to statement.
The new U.S. law comes just as Washington and Beijing showed signs of working toward “phase-one” of deal to ease the trade war. Trump would like the agreement finished in order to ease economic uncertainty for his re-election campaign in 2020, and has floated the possibility of signing the deal in a farm state as an acknowledgment of the constituency that’s borne the brunt of retaliatory Chinese tariffs.
Last week China's Vice Premier and chief trade negotiator Liu He said before a speech at the Bloomberg New Economy Forum in Beijing, that he was “cautiously optimistic” about reaching the phase one accord. He will now have no choice but to amend his statement.
In anticipation of a stern Chinese rebuke, US equity futures tumbled, wiping out most of the previous day's gains... 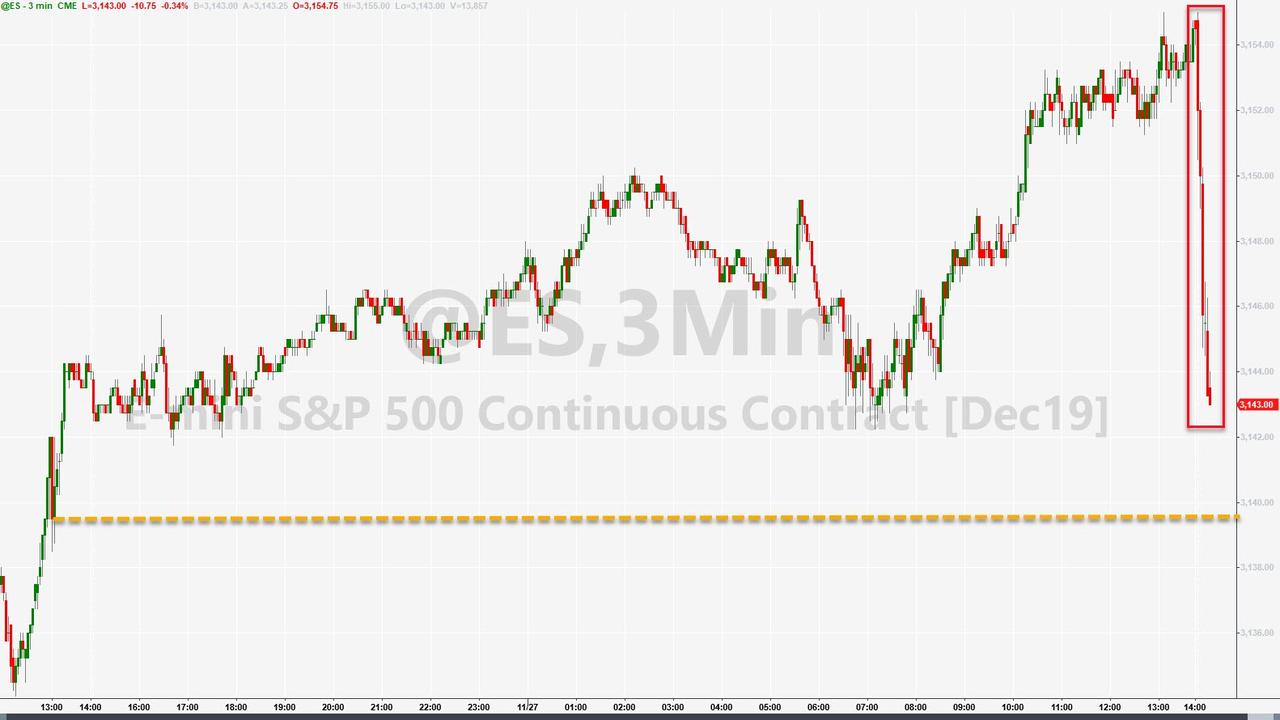 ... while the yuan slumped over 100 pips in kneejerk response. 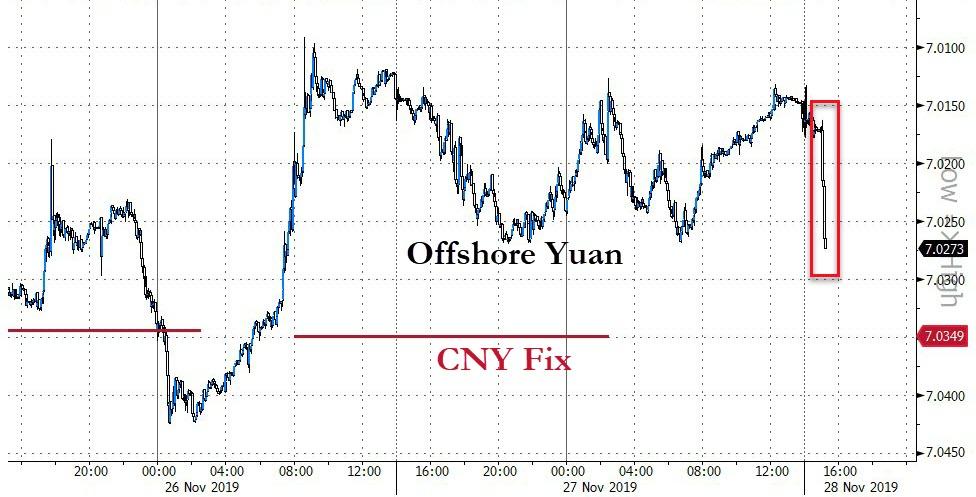 Still, the generally modest pullback - the S&P was around 2,940 when Trump announced the Phase 1 deal on Oct 11 - suggests that despite Trump's signature, markets expect a Chinese deal to still come through. That may be an aggressive and overly "hopeful" assumption, especially now that China now longer has a carte blanche to do whatever it wants in Hong Kong, especially in the aftermath of this weekend's landslide victory for the pro-Democracy camp which won in 17 of the city’s 18 districts.
“Following last weekend’s historic elections in Hong Kong that included record turnout, this new law could not be more timely in showing strong US support for Hongkongers’ long-cherished freedoms,” said Rubio
Posted by seemorerocks at 16:06