The fires in NSW: Fiddling while Rome burns 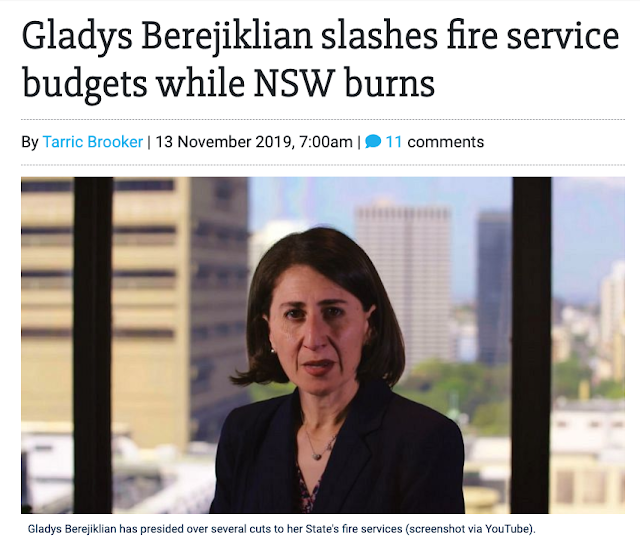 It is notable that the NSW State Government has recently cut its fire services, writes Tarric Brooker.
AS NSW BRACES itself against the threat of further catastrophic bushfires across much of the State, it has been revealed that the Berejiklian Government made major cuts to the capital expenditure budgets of both Fire and Rescue NSW and the Rural Fire Service.
While different from the daily operating budgets of these services that pay for things such as firefighters' salaries, the capital expenditure budget is put toward the purchase of all manner of essential fire fighting equipment such as fire trucks, helicopter water bombers and support ambulances.
Under the 2019-20 NSW State Budget, Fire and Rescue had its capital expenditure budget cut by $28.5 million or 35 per cent. The Rural Fire Service has its capital expenditure budget cut by $49.9 million or 75 per cent.
https://independentaustralia.net/article-display/gladys-berejiklian-slashes-fire-service-budgets-while-nsw-burns,13307#.XcseDcSyIFE.facebook 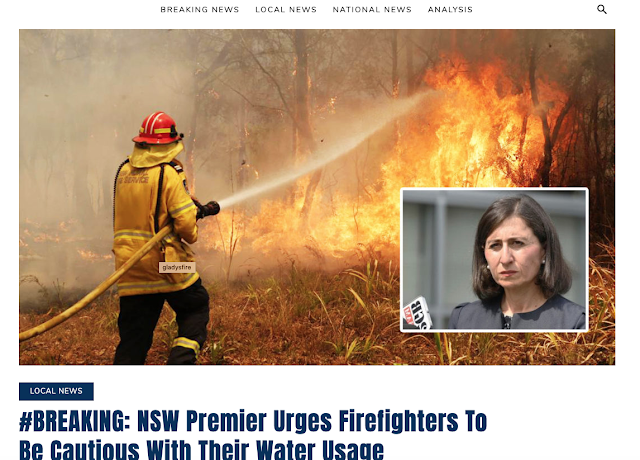 The NSW Premier has issued a stern warning to the state’s firefighters.

Level one water restrictions were introduced in June to protect Sydney’s water supply from drought conditions.

“Let’s not forget about our farmers who are doing it tough,” says the Premier. “We’ve seen some of the lowest in flows to dams since the 1940’s.”

It comes as 1,500 firefighters battle several blazes in the state’s north, which have so far killed three people.

“We need to take a broad view of our water consumption, even during times of severe fire danger,” says the Premier. “Please save water where you can.”

Critics have lashed out at the Premier’s comments, likening them to her stance on pill testing and Sydney’s lock out laws.

“Her priorities are completely out of whack,” says Mark Glasson of the NSW Rural Fire Service. “She has got no fucking idea what she’s on about.”
https://doublebaytoday.com/breaking-nsw-premier-urges-firefighters-to-be-cautious-with-their-water-usage/?fbclid=IwAR1hJ6O5R6LADsWvo4qlenNA_bXghufDaY0yE9caufVKlrsxRioaMA2Ke6U 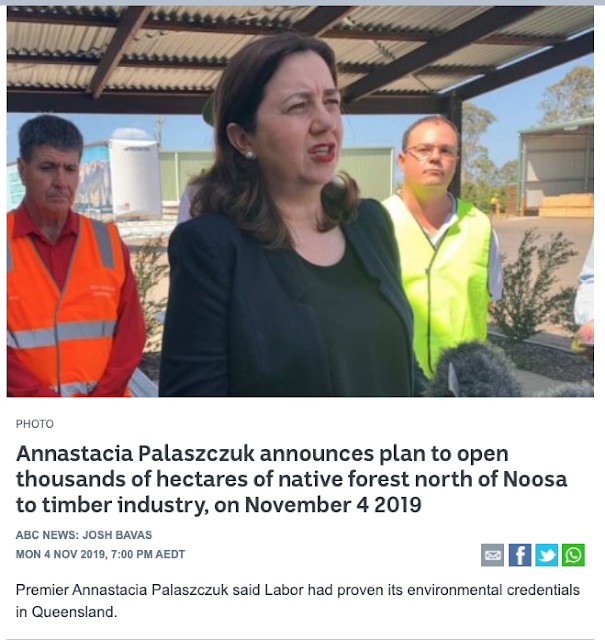 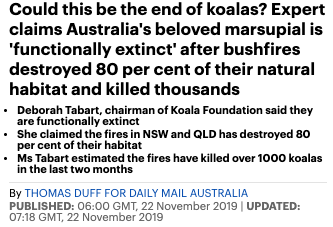 It may be too late to save the beloved koala after bushfires wiped out their natural habitat and killed thousands of their population, an expert claims.

Deborah Tabart OAM, chairman of the Australian Koala Foundation, estimated over 1000 koalas may have been killed in the last two months from deforestation and bushfires.

She said this this left the marsupials 'functionally extinct'.


The bushfires that continue to devastate NSW and Queensland have also destroyed 80 per cent of the koala's natural habitat.


Animals including koalas and kangaroos could be culled in parts of South Australia, where high population numbers are damaging the landscape.

A report from a parliamentary inquiry has recommended the state’s environment minister make an immediate decision to declare koalas, western grey kangaroos, long-nosed fur seals and little corellas overabundant in some areas.

Culling is an option that could be suggested, although the report acknowledges there is reluctance to communicate publicly the need for culling because “some community stakeholders find the concept of culling an abhorrent approach in managing overabundant species”.

The inquiry, by the parliament’s natural resources committee, investigated the impact and management of certain overabundant and pest animals and the effectiveness of current measures to keep numbers under control.


If the recommendation is adopted to declare population numbers of certain species too high, it would trigger ministerial powers to order control options. 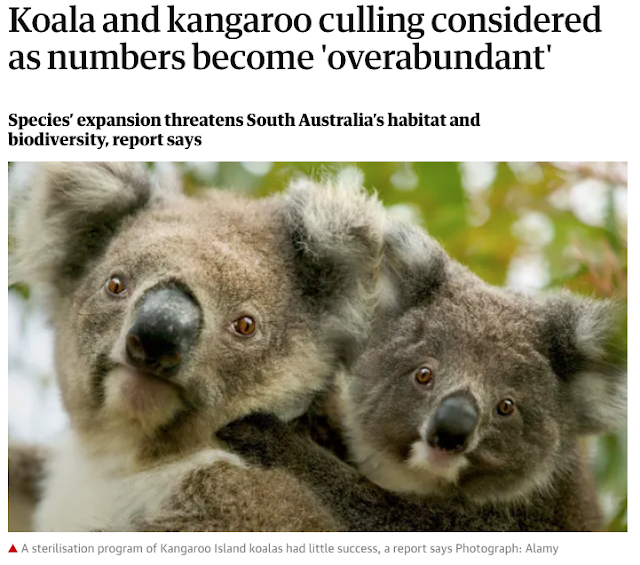 Posted by seemorerocks at 18:56