Well, actually it seems ambassador Sondland said something else

This is the official version of events at Adam ShiTT's Stalinist show trial, aka "the impeachment inquiry" 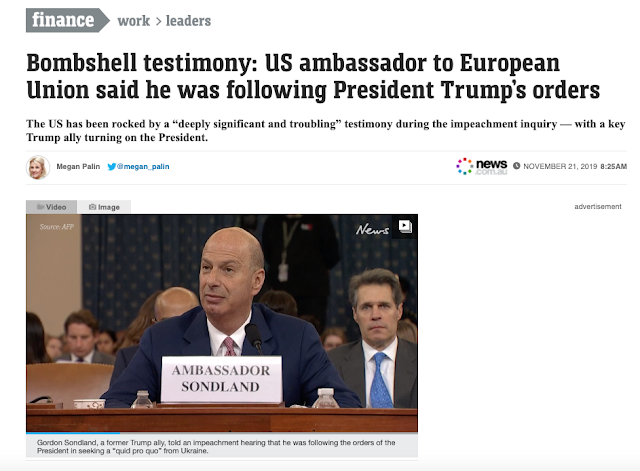 The US ambassador to the European Union told an impeachment hearing Wednesday that he was following the orders of President Donald Trump in seeking a “quid pro quo” from Ukraine.

Gordon Sondland — a wealthy Republican megadonor appointed by Mr Trump whose appearance before Congress is subsequently being watched especially closely — said he believed the President was pressing Ukraine to investigate his potential 2020 rival Joe Biden.

The inquiry focuses on a July 25 phone call in which Mr Trump is accused of asking Ukraine’s new President Volodymyr Zelensky to carry out two investigations that could benefit him politically, including one targeting Democratic political rival Joe Biden.

“Everyone was in the loop,” Mr Sondland said. “It was no secret.”

Mr Sondland implicated several key members of the US Administration in the scandal, testifying that Secretary of State Mike Pompeo signed off on parts of the pressure campaign, and Mick Mulvaney, the acting White House chief of staff, was heavily involved. He said they all understood that there was a “clear quid pro quo” linking a White House meeting for Mr Zelensky to a promise by him to announce investigations into the Bidens.

“I know that members of this committee have frequently framed these complicated issues in the form of a simple question: Was there a quid pro quo?” Mr Sondland said. “As I testified previously, with regard to the requested White House call and White House meeting, the answer is yes.”

He said that Mr Trump held off on offering a summit with Mr Zelensky, as his personal lawyer Rudy Giuliani demanded Kiev publicly announced that it was investigating a gas company on which former vice president Joe Biden’s son Hunter held a paid board position.

Mr Giuliani also wanted Mr Zelensky to investigate a widely discredited conspiracy theory in which Ukraine planted evidence on a server of Mr Biden’s Democratic Party to show that Russia interfered in the 2016 election, according to Mr Sondland.

“We followed the President’s orders,” Mr Sondland said in his prepared testimony to an open hearing of the House Intelligence Committee.

He said that Mr Trump forced US diplomats to work with Mr Giuliani.

“We did not want to work with Mr Giuliani. Simply put, we played the hand we were dealt,” he said.

“We weren't happy with the presidential directive to 'talk with Rudy' … but … it was the only course open to us.”

According to Mr Sondland, the actions he took were on orders from Mr Giuliani, who was following the commander-in-chief’s direction.

“Mr Giuliani’s requests were a quid pro quo for arranging a White House visit for President (Volodymyr) Zelensky. Mr Giuliani demanded that Ukraine make a public statement announcing investigations of the 2016 election/DNC server and Burisma. Mr Giuliani was expressing the desires of the President of the United States, and we knew that these investigations were important to the President,” he said in the statement, referring to the energy giant that hired Mr Biden’s son Hunter.

According to Mr Sondland, he “never received a clear answer” on why the US suspended $391 million in military aid to Ukraine, which is battling Russian-backed separatists, but that he “came to believe” it was also tied to the investigations sought by Mr Trump.

“I was adamantly opposed to any suspension of aid, as the Ukrainians needed those funds to fight against Russian aggression,” he said.

“In the absence of any credible explanation for the suspension of aid, I later came to believe that the resumption of security aid would not occur until there was a public statement from Ukraine committing to the investigations of the 2016 election and Burisma, as Mr Giuliani had demanded.”

Mr Trump, who has repeatedly denied any wrongdoing, released the aid to Ukraine on September 11.


Mr Sondland also testified that Mr Trump told him Ukraine had tried to “take him down” during the election.

The White House on Wednesday pushed back against Mr Sondland’s testimony that there was a quid pro quo involving the US and Ukraine.

“Ambassador Sondland previously testified that the President told him directly that he was not interested in a quid pro quo,” the White House said in a statement, referring to his closed-door testimony last month. “He testified that President Trump repeatedly made it clear he wanted no quid pro quo.”

Democrat of California and the chairman of the Intelligence Committee Adam Schiff described Mr Sondland’s testimony as “deeply significant and troubling”.

“It goes right to the heart of the issue of bribery, as well as other potential high crimes and misdemeanours,” he said.

Standing on the South Lawn of the White House while Mr Sondland was still at the witness table, Mr Trump tried to distance himself from the ambassador.

“I don’t know him very well — I have not spoken to him much,” he told reporters before leaving on a trip to Texas.

“This is the final word from the President of the United States: I want nothing.”

Mr Trump was quoting himself from a conversation he had with Mr Sondland about how he should proceed with the Ukrainian President the day before his infamous phone call with Mr Zelensky.

Mr Sondland was appearing in the second week of televised impeachment hearings, in which Democrats are seeking to establish whether Mr Trump abused the power of his office by leveraging military aid and a White House meeting to extract a commitment from Mr Zelensky to probe the Bidens.

The House investigation could conceivably wrap up this week, with evidence then sent to the House Judiciary Committee to draw up articles of impeachment.


Mr Trump’s impeachment by the Democratic-controlled House would place the President on trial in the Senate, where a Republican majority could protect him from removal.

However, there seems to be more... 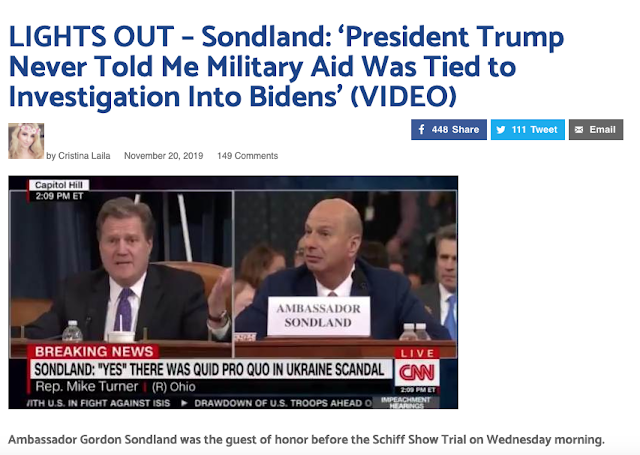 Sondland just took credit for all of it.

Turner: "Is that your testimony here today, Ambassador Sondland, that you have evidence that Donald Trump tied investigations to the aid? Because I don't think you're saying that.”

Turner: "So no one told you. Giuliani didn't tell you. Mulvaney didn't tell you. Nobody. Pompeo. Nobody else on this planet told you that Donald Trump was tying aid to these investigations. Is that correct?"

Sondland: "I think I already testified."

Turner: "Answer the question. Is it correct? No one on this planet told you that Donald Trump was tying this aid to the investigations—because if your answer is yes, then the chairman is wrong and the headline on CNN is wrong.

No one on this planet told you that president Trump wastying aid to investigation. Yes or no?"

Turner: "So you really have no testimony here today that ties President Trump to a scheme to withhold aid from Ukraine in exchange for these investigations"

Sondland: "Other than my own presumption"

Turner: "Which is nothing."

White House press secretary Stephanie Grisham said in a statement that “Ambassador Sondland’s testimony made clear that in one of the few brief phone calls he had with President Trump, the President clearly stated that
he ‘wanted nothing’ from Ukraine and repeated ‘no quid pro quo over and over again.’”
Posted by seemorerocks at 11:56

Email ThisBlogThis!Share to TwitterShare to FacebookShare to Pinterest
Labels: Ukrainegate