China Threatens Retaliation against the USA 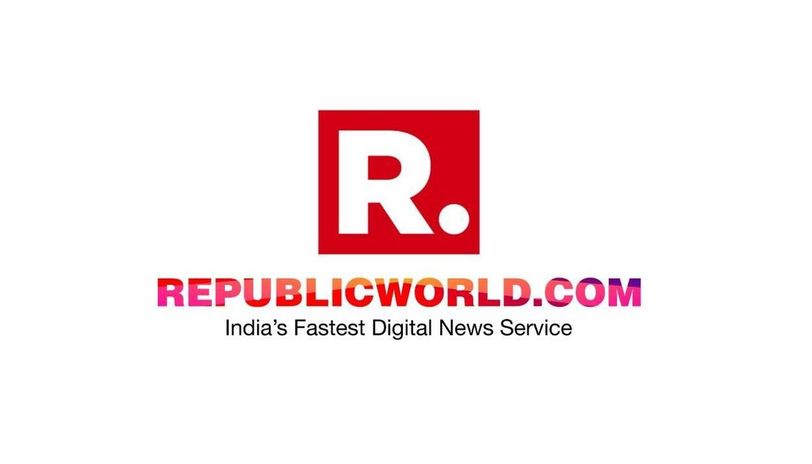 On November 19th, the US Senate passed the "Hong Kong Bill of Rights on Human Rights and Democracy." The bill disregards the facts, confuses right and wrong, violates the axioms, plays with double standards, openly intervenes in Hong Kong affairs, interferes in China's internal affairs, and seriously violates the basic norms of international law and international relations. The Chinese side strongly condemns and resolutely opposes this.
In the past five months, the persistent violent criminal acts in Hong Kong have seriously jeopardized the safety of the public's life and property, seriously trampled on the rule of law and social order, seriously undermined Hong Kong's prosperity and stability, and seriously challenged the bottom line of the "one country, two systems" principle. At present, what Hong Kong faces is not the so-called human rights and democracy issues, but the issue of ending the storms, maintaining the rule of law and restoring order as soon as possible. The Chinese central government will continue to firmly support the Hong Kong SAR Government in its administration of the law, firmly support the Hong Kong police in law enforcement, and firmly support the Hong Kong Judiciary in punishing violent criminals in accordance with the law, protecting the lives and property of Hong Kong residents and maintaining Hong Kong's prosperity and stability.
Since the return of Hong Kong to the motherland, the practice of "one country, two systems" has achieved universally recognized success. Hong Kong residents enjoy unprecedented democratic rights and fully exercise various freedoms in accordance with the law. The relevant bills of the US Congress completely ignore the objective facts and completely ignore the well-being of Hong Kong residents. For the ulterior political purpose, the Hong Kong violent elements are smashed, bullying and attacking innocent citizens, forcibly occupying the campus and besieging young students. Organized attacks on the police and other criminal acts are striving for the pursuit of "human rights" and "democracy". The purpose is to support the extremist forces and violent elements in the anti-China chaos and to undermine Hong Kong's prosperity and stability so that they can borrow Hong Kong. The problem hinders the sinister plot of China's development. This bad behavior of the United States not only harms China’s interests, but also undermines the important interests of the United States itself in Hong Kong. Any attempt by the US to intervene in China's internal affairs and hinder China's development will not succeed. In the end, it will only be a waste of effort.
I want to stress once again that Hong Kong is China's Hong Kong and Hong Kong affairs are purely China's internal affairs. We are telling the US to recognize the situation and take the plunge. We will immediately take measures to prevent the case from becoming a law. We will immediately stop interfering in Hong Kong affairs and interfering in China's internal affairs so as not to ignite the fire and suffer from self-sufficiency.
If the US side is willing to go its own way, China will surely take effective measures to resolutely counteract and firmly safeguard national sovereignty, security, and development interests.

US futures immediately pushed lower on this statement...

And Yuan is extending losses... 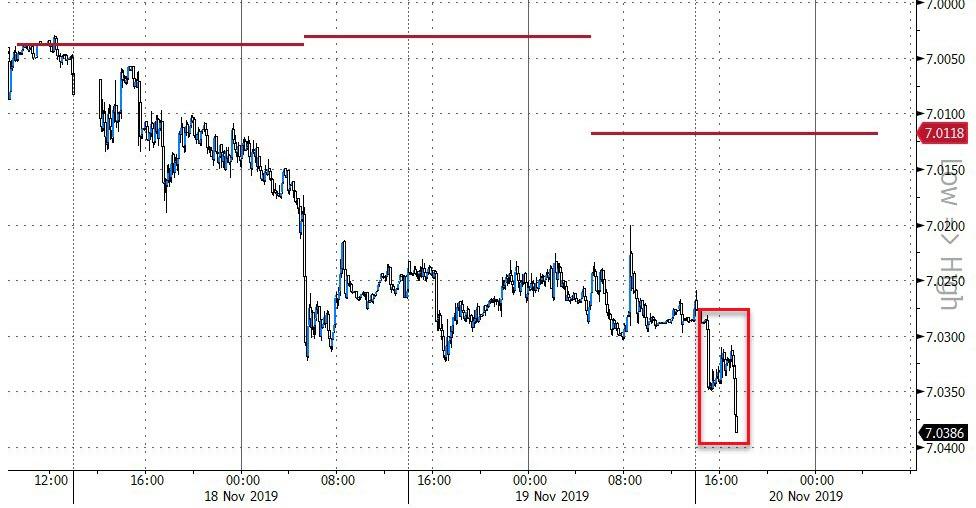 Source: Bloomberg
*  *  *
In a widely anticipated move, just after 6pm ET on Tuesday, the Senate unanimously passed a bipartisan bill, S.1838,  showing support for pro-democracy protesters in Hong Kong by requiring an annual review of whether the city is sufficiently autonomous from Beijing to justify its special trading status. In doing so, the Senate has delivered a warning to China against a violent suppression of the demonstrations, a stark contrast to President Donald Trump’s near-silence on the issue, the result of a behind the scenes agreement whereby China would allow the S&P to rise indefinitely as long as Trump kept his mouth shut.
As we reported last week, the vote marks the most aggressively diplomatic challenge to the government in Beijing just as the US and China seek to close the "Phase 1" of their agreement to end their trade war. The Senate measure would require annual reviews of Hong Kong’s special status under U.S. law to assess the extent to which China has chipped away the city’s autonomy; in light of recent events, Hong Kong would not pass. It's unclear what would happen next.
As Bloomberg notes, the House unanimously passed a similar bill last month, but slight differences mean both chambers still have to pass the same version before sending it to the president.
”The United States has treated commerce and trade with Hong Kong differently than it has commercial and trade activity with the mainland of China,” said Republican Senator Marco Rubio of Florida, the bill’s lead sponsor. "But what’s happened over the last few years is the steady effort on the part of Chinese authorities to erode that autonomy and those freedoms", he added on the Senate floor.
The Senate bill passed by unanimous consent, which means there was no roll call vote because no senators objected to it. Rubio said on Twitter before the vote Tuesday that the bill, S. 1838, will “head over to the U.S. House & then hopefully swiftly to the President.”
That is one option: The House could simply take up the Senate bill. The other option would be to reconcile the differences between the two versions and have both chambers vote on the compromise bill. New Jersey Representative Chris Smith, the lead Republican sponsor of the House bill, said he expects the House Foreign Affairs and Senate Foreign Relations Committees to go for the latter option to work out the slight differences. He said the resulting compromise could be included in a defense bill slated for a vote later this year.
* * *
The legislation comes at a difficult time for Trump as his administration is trying to complete the first phase of a long-awaited trade deal with China. Earlier on Tuesday, Vice President Mike Pence said that it would be difficult for the U.S. to sign a trade agreement with China if the demonstrations in Hong Kong are met with violence.
“The president’s made it clear it’ll be very hard for us to do a deal with China if there’s any violence or if that matter is not treated properly and humanely,” Pence said in an interview with Indianapolis-based radio host Tony Katz.
Another prominent Republican, Senate Majority Leader Mitch McConnell urged Trump to personally voice support for the protesters on Monday, which Trump has refused to do.
“We have to get it passed and we have to get it passed quickly,” Smith said. The legislation tells protesters that “Congress has their back, that we are fully supportive of democracy and rule of law in Hong Kong.”
"It tells Xi Jinping that there’s a price,” Smith said of China’s president. “There’s one provision after another that says, ‘we’re not kidding.’" The bill would also sanction Chinese officials deemed responsible for undermining Hong Kong’s autonomy.
The bit question now is how will China react: the Chinese Foreign Ministry has repeatedly warned that there would be “strong countermeasures” for passing such legislation. That could complicate the delicate negotiations between the world’s two largest economies to get the trade deal over the finish line.
"What was already complicated just got more complicated, and the bill’s passage adds to the growing list of political reasons why Xi and Trump are unlikely to find a compromise," said Jude Blanchette, a China expert at the Center for Strategic and International Studies. “While Xi has more control over the domestic political environment in China, he’s not immune from the bad optics of negotiating with a government that he claims is tampering with his own political system.”

* * *
It remains unclear whether Trump will veto the bill, opening himself up to accusations he has been in bed with Beijing all along. So far Trump has not indicated whether he would sign the legislation if it gets to his desk.
Another complication: the timeline for completing the trade agreement could collide with this legislation landing on Trump’s desk. A congressional aide told Bloomberg the Senate measure was drafted with help from Treasury and State Department officials, but a senior administration official on Monday cautioned that Trump’s seal of approval is the only one that matters.
Because the Hong Kong bill passed both the House and the Senate without a single lawmaker objecting, there would probably be enough support to override a presidential veto.
"Today’s vote sends a clear message that the United States will continue to stand with the people of Hong Kong as they battle Beijing’s imperialism,” said Republican Senator Josh Hawley of Missouri. “The Chinese Communist Party’s quest for power across the region is a direct threat to America’s security and prosperity."
S&P futures dipped modestly on the news of the bill's unanimous passage...

... although that isn't saying much for a market that is so hypnotized by the Fed's "NOT QE" that it barely if ever responds to any actual news. 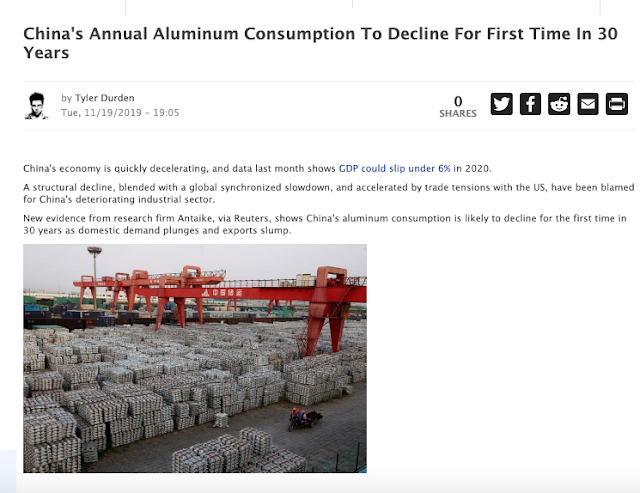 https://www.zerohedge.com/commodities/chinas-annual-aluminium-consumption-decline-first-time-30-years
Posted by seemorerocks at 16:06