agreement with China after

out on US-Korea talks his 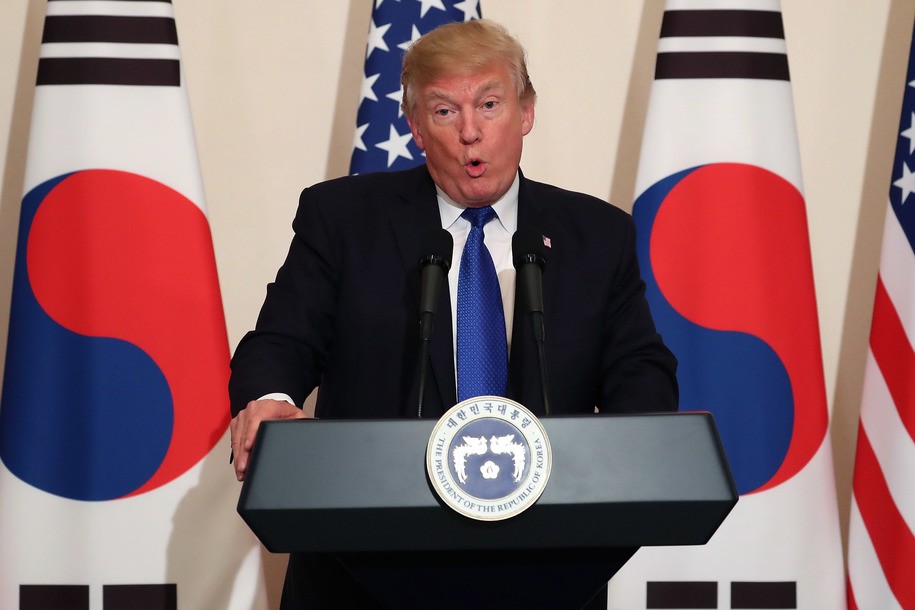 Although Donald Trump is currently the target of an impeachment inquiry for tying U.S. military aid to Ukraine to a demand that the nation "investigate" his political opponents, he remains in control of U.S. foreign policy. That means he retains the ability to undo decades of international policy on a whim, an ability he continues to use with reckless abandon.

In the latest souring of relations between the United States and South Korea, the two nations have suspended diplomatic negotiations on how to share costs for the U.S. troop presence in South Korea after a Trump demand that the nation pay five times its current contribution going forward. And the negotiations appear to have been broken off on a sour note: Complaining that South Korean officials were "not responsive to our request," top U.S. negotiator James DeHart said in a statement that the U.S. had "cut short our participation in the talks today in order to give the Korea side time to reconsider."

The United States currently has nearly 30,000 soldiers in South Korea, a decades-long deterrence to potential North Korean attack, and conducts regular joint exercises with the South Korean military as precaution against such an attack. The North Korean dictatorship, on the other hand, has consistently demanded an end to those exercises and the withdrawal of U.S. troops as their own conditions for denuclearization.

Coincidentally or not, Trump's own impulses toward South Korea have mirrored those North Korean demands. As he has in Europe and elsewhere, Trump has repeatedly bristled at the cost of U.S. alliances, demanding allies pay more for what he has often described as U.S. "protection." And Trump has consistently signaled his own desire to end regular U.S.-South Korea joint exercises, both because of the price tag and as negotiated concession to the North Korean leadership.

While Trump's negotiation team walked out of South Korean talks to give one of our closest military allies "time to reconsider" their situation, South Korean officials appear to have done exactly that. Soon after the suspension of talks, South Korea signed a new defense agreement with China, agreeing to establish stronger military communications to boost "cooperation" between them.

Trump has been threatening to sharply reduce the U.S. presence in South Korea unless the nation agrees to his demands; South Korea appears to be taking that threat seriously, and preparing for that possibility.