Recap:
After several hours of public testimony from NSC official Lt. Col. Alexander Vindman and Russia adviser Jennifer Williams, we now know - or have confirmation of the following:

Vindman, whose job is to handle Ukraine policy: "I'm not aware of this fact." 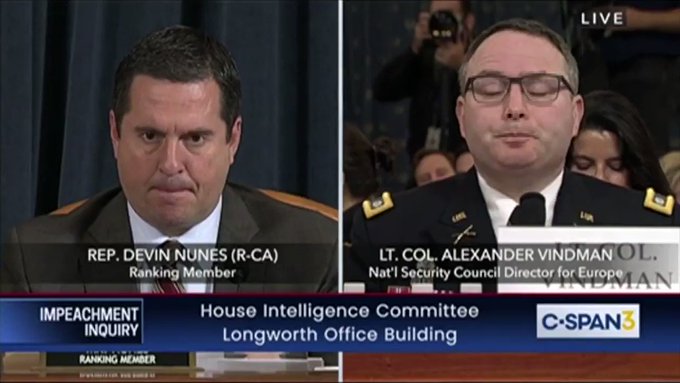 5,515 people are talking about this

"I had my meeting w/the attorney, & I did my coordination, & I spoke to the appropriate people in the interagency"

"Appropriate people" being a registered Dem w/known bias against POTUS who works for CIA?

Whoops! We're not allowed to ask that! 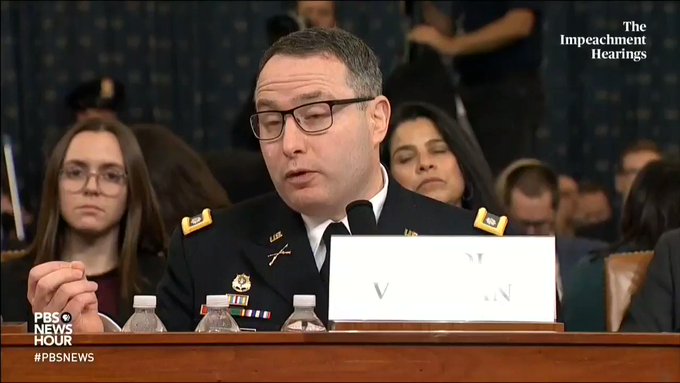 1,106 people are talking about this

Sean Davis ✔@seanmdav
That hearing with Vindman, who is clearly the intelligence community's Patient Zero in the latest iteration of Democrats' anti-Trump coup theater, could not have gone more poorly for Democrats.

1,345 people are talking about this

Trump War Room (Text TRUMP to 88022) ✔@TrumpWarRoom
DEMOCRAT: "Would it ever be U.S. policy in your experience to ask a foreign leader to open a political investigation?"

VINDMAN: "There are proper procedures in which to do that. Certainly the President is well within his right to do that." 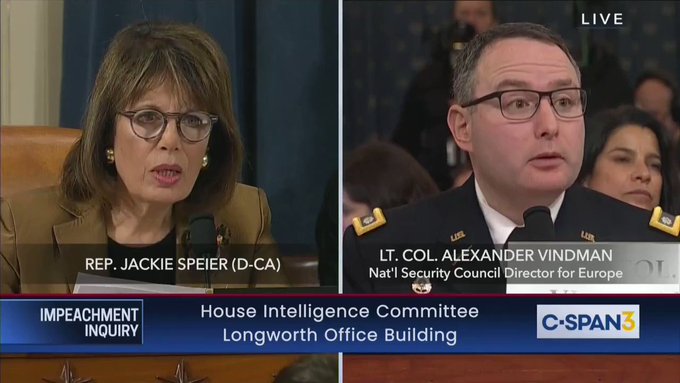 2,967 people are talking about this

Lee Zeldin ✔@RepLeeZeldin
Dems have done a great job today accidentally getting LTC Vindman to confirm the President did nothing wrong. Kudos! Can we go pass USMCA now?
16.6K
7:21 AM - Nov 20, 2019
Twitter Ads info and privacy

7,300 people are talking about this

732 people are talking about this

✔@SharylAttkisson
I don't blame Lt. Col. Vindman -- but it's worth asking why Ukraine wd offer this U.S. National Security Council official position as Ukraine's Defense Minister?? Obviously, Vindman has US interests first. Why would Ukraine think he'd want to serve their foreign administration?
2,463
8:42 AM - Nov 20, 2019
Twitter Ads info and privacy

1,281 people are talking about this

Benny ✔@bennyjohnson
If you watch one clip from today’s #ImpeachmentHearings - watch this moment from Jim Jordan.

Jordan properly conveys the exhaustion the American people feel about the frantic “get Trump!” Cult 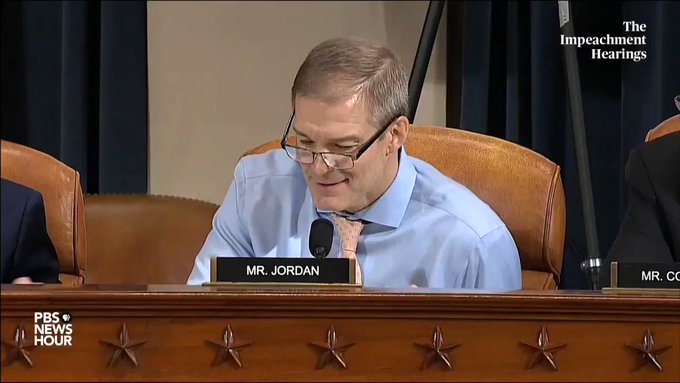 1,304 people are talking about this
As an aside - Rep. Eric Swalwell was cookin' with gas in this clip which may or may not be fake news: 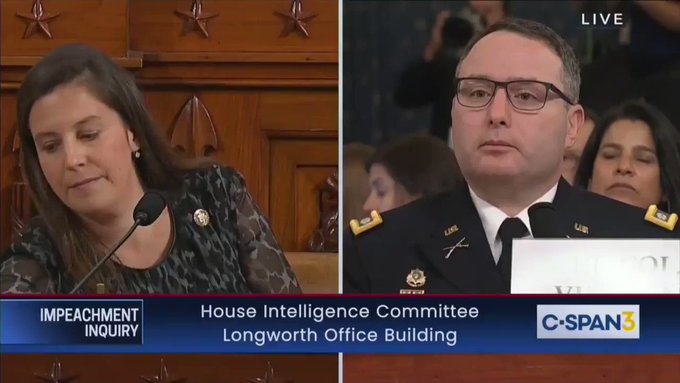 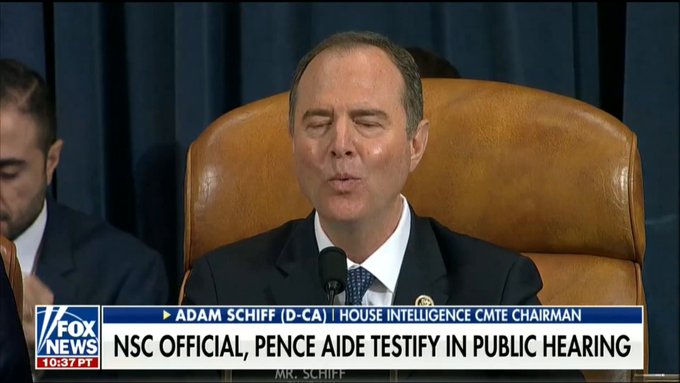 12K people are talking about this
According to The Federalist's Sean Davis, Vindman's testimony was "a disaster for impeachment efforts."

Sean Davis ✔@seanmdav
That hearing with Vindman, who is clearly the intelligence community's Patient Zero in the latest iteration of Democrats' anti-Trump coup theater, could not have gone more poorly for Democrats.

1,345 people are talking about this
***
Update 4: As the questioning continues, Vindman has once again been forced to admit that when he initially reported his misgivings about President Trump's behavior in the July 25 call, he didn't adhere to the 'chain of command' when he reported the call to counsel instead of directly to his superiors.

Sean Davis ✔@seanmdav
WENSTRUP: You said you respect the chain of command. Did you go to your direct boss, Tim Morrison?

939 people are talking about this

Sean Davis ✔@seanmdav
WENSTRUP: Did you ask that the word "demand" be included in the July 25 call transcript?

1,482 people are talking about this
Meanwhile lawmakers have bashed Vindman for insisting that a Republican lawmaker refer to him by his full rank 'Lt. Col. Vindman' despite the fact that the Congressman isn't in the military.

The New York Times ✔@nytimes
Rep. Devin Nunes: "Mr. Vindman, you testified in your deposition that you did not know the whistleblower." 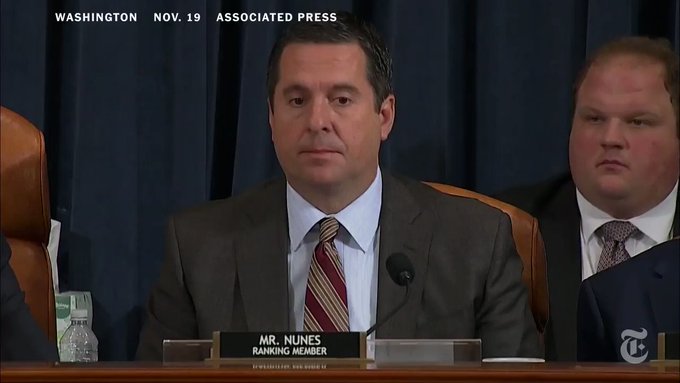 490 people are talking about this
* * *
Update 3: Adam Schiff is now doing his best to use the constitutional protections of the whistleblower to stop Vindman from an embarrassingly public unmasking.

Sean Davis ✔@seanmdav
Nunes: Did you discuss the July 25 call or July 26 call with anyone outside the White House?

Vindman: Yes. George Kent, and someone I'm not going to name who works in the intelligence community.

Schiff just told Vindman not to answer the question.


Update 2: More lunacy...and we're not even close to being finished with the first round of Tuesday testimony.

'No Quid-Pro-Quo, Bribery Or Treason' Testify Volker And Morrison


7:46 P.M. — Morrison once again confirms he didn’t hear anything unlawful during the Trump-Zelensky call.
7:45 P.M. — Morrison confirms each time Sondland told him he had spoken with President Trump, he checked the call logs to see it occurred.
7:40 P.M. — Volker: “Ambassador Sondland is a big personality and sometimes he says things that might be a bit bigger than life.”
7:35 P.M. — Volker on Sondland: “He cared about Ukraine. He wanted to see U.S. support to Ukraine increased.”
7:30 P.M. — Morrison: “I did not understand [investigating the Biden family] as a policy objective.”

Volker and Morrison both say they have no evidence of quid pro quo, bribery or treason https://www.cbsnews.com/live-news/trump-impeachment-hearings-live-stream-kurt-volker-tim-morrison-2019-11-19/ … 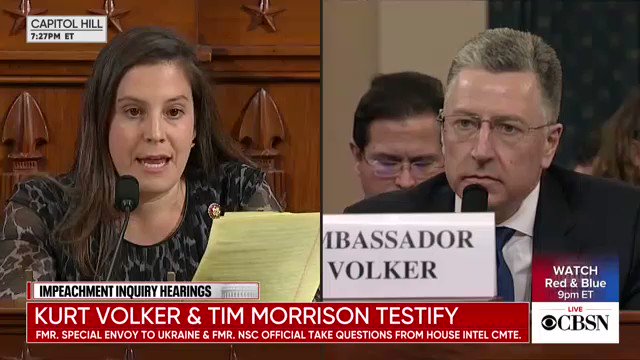 316 people are talking about this

Top official Tim Morrison said Alexander Vindman's bosses had a lot of concerns about him: 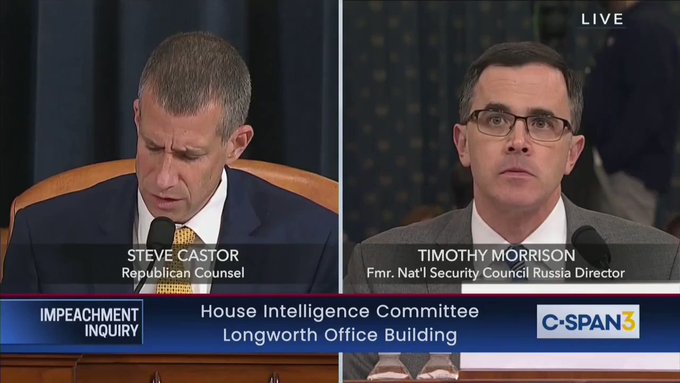 4,054 people are talking about this


5:35 p.m. Morrison testifies that he heard nothing wrong on the July 25 Trump-Zelensky call. Wanted access restricted to the transcript over leak concerns.
4:55 p.m. Nunes begins questioning the witnesses, saying that whatever "drug deal" the Democrats are cooking up, the American people aren't buying it.

Nunes: What ever "drug deal" the Democrats are cooking up, the American people don't buy it.

Says TV ratings are way down.


4:30 p.m. When asked whether he interpreted President Trump's request to speak with Rudy Giuliani about Ukraine as an order, Volker responds that he understood it to be "part of the dialogue."
4:30 p.m. Volker states his opposition to the Biden investigation, saying "I don’t think that raising the 2016 election or Vice President Biden or these things that I consider to be conspiracy theories circulated by the Ukrainians — they’re not things we should be pursuing as our national security strategy with Ukraine."

Volker thinks that the Burisma investigation was necessary & unremarkable. Hunter Biden was on the board of that corrupt company. He doesn’t seem to have a problem w/ an investigation into Burisma, including presumably Hunter Biden’s role on that board.

280 people are talking about this


4:25 p.m. Morrison says Trump's mention of the Bidens and Crowdstrike during the July 25 call with Zelensky weren't part of his NSC-supplied talking points.

NEVER MISS THE NEWS THAT MATTERS MOST

DEMOCRAT: "Would it ever be U.S. policy in your experience to ask a foreign leader to open a political investigation?"

VINDMAN: "There are proper procedures in which to do that. Certainly the President is well within his right to do that."

2,965 people are talking about this


According to a Reuters anonymous source, Volker was central to discussions with Ukraine which would have involved whether the White House withheld US aid in exchange for investigations into gas firm Burisma and the Bidens.
"He knew that Volker and Sondland and Kent were on top of this and were dealing with it on the day to day... His take on this was ... he should let those people do their job."
According to Fox News, a total of nine current and former US officials are set to testify over the next three days in the House's impeachment inquiry.
Posted by seemorerocks at 16:12