Netanyahu indicted for bribery and corruption 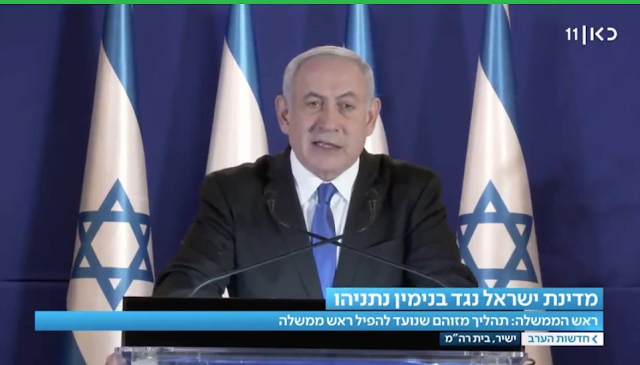 
The Attorney General of Israel just indicted Prime Minister Bibi Netanyahoo in three cases. The announcement comes at a time of political stalemate. It might help to resolve it.


Israel had two parliament elections this year which both ended in a political stalemate. Neither Prime Minister Netanyahoo of the Likud Party nor Blue and White coalition leader Benny Gantz managed to form a government. Both were unable to find enough additional votes to form a coalition and to gain a majority.


Now the parliament has 21 days to find a majority. It will likely fail and a third election seems inevitable.

It is curious that Israel's Attorney General used this point in time to finally charge Netanyahoo:

In the most serious case Netanyahoo is alleged to have changed regulations in exchange for more positive press coverage:


Case 4000 is considered the most serious, and revolves around an alleged bribery deal between Netanyahu and businessman Shaul Elovich, who controlled the Bezeq telecommunications company and the Walla News site. According to the indictment, Netanyahu and Elovich engaged in a quid-pro-pro deal in which Netanyahu – as communication minister – led regulatory steps directly tied to Elovich's businesses and interests that yielded the tycoon some $500 million

In return, according to the indictment, Netanyahu and his wife Sara made consistent requests to alter the coverage on the Walla News website in order to serve the Netanyahus' interests and target their opponents. Elovich allegedly pressed the editors of the website to comply with the Netanyahus' demands.


Walla publisher Elovich as well as Arnon Mozes, publisher of the Yedioth Ahronot media group, will also be indicted for bribery.


The charges have been known for quite some time and the timing of the official announcement seems political.


Netanyahoo will now come under intense pressure to resign. It is very much his personality that blocked the forming of a new government. Should he be removed over the next 21 days it might be possible for the parliament to form a government and to avoid a third election.

But Netanyahoo will fight tooth and nail to gain and keep immunity. He will try to delegitimize the judicative and he will use any available trick to stay in office.


That makes him even more dangerous than he usually is.


He might even decide to do something, like starting a big war, to prevent his removal from power.

Lebanon, Syria and Iran must watch out.

The Israeli Prime Minister Wants His Own “Investigation Of The Investigation” By An Independent Commission.

Despite growing calls for his resignation, Israeli Prime Minister Benjamin Netanyahu has vowed to fight on against what he calls an “attempted coup” by police and state prosecutors.


At 7:30 p.m. local time (11:30 a.m. EST) Thursday, Israeli Attorney General Avichai Mandelblit announced the nation’s longest-serving premier would be charged with three counts each of fraud and breach of trust and one count of bribery. This is the first time in Israel’s history that a serving prime minister has faced criminal charges.


Mandelblit called it a “difficult and sad day,” adding he made his ruling “with a heavy heart, but also with a whole heart”:


“In the prime minister’s affairs, I found there was evidence pointing to grave actions allegedly being committed, which carry a reasonable likelihood of conviction. For this reason, it is my duty by law to indict. It is not a choice. It is an obligation. Thus, it is in the case of any citizen, and thus I acted here.


“Law enforcement isn’t optional. It’s not a question of politics. It’s a duty incumbent upon us … We were not swayed by slander from all sides, and acted only to enforce the law.”


The attorney general also addressed “many lies” made about the prosecution and police—particularly by Netanyahu and his supporters. He said it was dangerous and those engaging in it were “playing with fire,” adding:


“It must stop. I call on everyone, and first and foremost the leaders of the state, you must distance yourself from discourse that threatens law enforcement officials. We’re not infallible or above criticism. But we acted without fear or prejudice, for the rule of law.”


Immediately following Mandelblit’s announcement, the prime minister’s Likud party rallied its members outside the premier’s Jerusalem residence as a show of support. Several hundred rallied outside as he gave his forceful response inside:


After running down a long list of complaints about the conduct of police investigators and prosecutors, Netanyahu said these issues emphasize “how much this process is tainted.” He blamed the political left and the “slanted media” for attacking him over an agenda he says would result in a “strong country, not a weak, shrunken, bowed country.”


He concluded with a call for an independent investigation into the “tainted investigation.” He said it’s not just about “transparency,” but also “accountability.” He added:


“My sense of justice burns within me. I cannot believe that the country I fought for and was wounded for, that I’ve brought to such achievements, that in this country, in its democracy, there will be this kind of tainted justice, of selective enforcement. I won’t let the lie win. I will continue to lead this country with devotion. For this country, for the rule of law, for justice, we have to do one thing: to finally investigate the investigators.”


State Prosecutor Shai Nitzan said that now that Netanyahu has been formally indicted, he will have to give up the other ministerial portfolios he currently holds. Prior to the indictment, he held the health, welfare, and diaspora portfolios—and until just recently, he also held the foreign affairs and defense portfolios.


Under Israeli law, a minister must step down if charged with a criminal offense. That law does not, however, apply to the prime minister. But it does impact Netanyahu during the current impasse over forming a government.


Earlier in the day, President Reuven Rivlin took the unprecedented step of handing the mandate to form a government to Knesset Speaker Yuli Edelstein. This move means that every member of the legislative body may now attempt to form a coalition government, if they can receive the support of a majority of the 120-member body.


The Knesset now has 21 days to form a coalition, an unlikely proposition given the fact neither of the leading parties had been able to do so when they each held the mandate themselves. But Rivlin’s move fulfills his promise to the Israeli people to explore every option at his disposal to prevent a third election, which now seems likely to be held in March.


Netanyahu’s chief rival for leadership of Likud—in anticipation of the likely upcoming election—has demanded a leadership election under the party’s rules. Gideon Sa’ar says that if the party is to face a third round of elections, it would only make sense to have a prime minister that can unite the country and win an outright majority:


“I can form a government and unite the nation and politics. We must set a date for primaries as we are a democratic party and Yesh Atid, which cancels internal elections. In Likud, there has not been primaries for a number of years.”


Sa’ar, who previously held Cabinet positions in Netanyahu’s government, has not yet weighed in on the premier’s indictment.


Center and Left politicians in the Knesset quickly jumped on the bandwagon to call for Netanyahu’s resignation. The prime minister’s chief rival, Blue & White Coalition leader Lt. Gen. Benny Gantz (ret.) pointed out that 11 years ago his former boss had said that a premier “neck deep in investigations”—a reference to then-Prime Minister Ehud Olmert—“has no moral or public mandate to make fateful decisions for the State of Israel.”


Gantz called today’s announcement a “very sad day for the State of Israel.” His coalition partner, Yair Lapid, also called on the prime minister to resign:


“Until the last few years, Benjamin Netanyahu dedicated his life to strengthening the State of Israel. If he still cares about the country, he should do one more thing for it—resign.”


Those sentiments were also shared by Democratic Camp leader Nitzan Horowitz, Arab Joint List leader Ayman Odeh, and Labor-Gesher leader Amir Peretz. But curiously, the prime minister’s biggest political nemesis in the past 10 months, Yisrael Beytenu leader Avigdor Liberman, pulled up short of calling for his resignation—instead saying he wanted to see the justice system do its work and provide the premier a chance to prove his innocence in court.


A snap poll conducted by Channel 12 showed 46 percent of Israelis surveyed felt Netanyahu should resign due to the nature of the criminal charges against him. Seventeen percent said they thought he should at least stand down temporarily until the matter is resolved. Only 30 percent said he should remain in power.


One Israeli political analyst has noted that even though the indictments were announced today, it could be months before Netanyahu would have to face them. That’s because it’s widely believed he will formally ask the Knesset for immunity.


That’s a decision that can only be made by the Knesset House Committee and its plenum, which have not convened because a government coalition has not been formed. It will be at least 21 days before a new election can be called. It is widely believed the third election date will be set in March.


Depending on the outcome of a third election, it could still be a few more weeks before a new government is formed and the new House Committee is able to convene and consider the prime minister’s request. During that entire time, the criminal cases against Netanyahu will not be allowed to proceed.


Some have speculated that gives the prime minister plenty of time to trigger a national crisis in a bid to rally support around his leadership. One such crisis could be a war with Iran.


Just hours before Mandelblit’s announcement, DEBKAfile reported that Israel was on “war alert” out of fear Iran would retaliate for the Israeli airstrikes earlier this week against Islamic Revolutionary Guard Corps positions in Syria.


All this as PressTV also reports Iran has dispatched “64 naval fleets” to the “Gulf of Aden” in a massive military buildup in the region.