Donald Trump’s secretary of state has reportedly told three prominent Republicans that he is planning to resign from the White House to run for a Senate seat.

Mike Pompeo had planned to stay at the State Department until early spring 2020 but he is now concerned that his connection to Mr Trump, particularly through the impeachment inquiry, is hurting his reputation, according to a Time report.

The Republicans quoted in the piece reportedly include a former Trump administration employee and another who remains in the government, while the third has served in several high-ranking posts.

The report claims Mr Pompeo’s resignation from the White House will be timed to allow for the “smoothest possible exit” from the administration.

However, State Department officials said Mr Pompeo has dismissed the story as “completely false” and insisted he is “100 per cent focused on being President Trump’s secretary of state.”

Mr Trump is not thought to have been told about any plans for the exit.

The secretary of state has been criticised for declining to defend US officials and impeachment inquiry witnesses against public attacks from Mr Trump.

At a press briefing on Monday, Mr Pompeo said he was proud of what the US had done in Ukraine but did not defend Marie Yovanovitch, the former US ambassador to Ukraine.

“I’ll defer to the White House about particular statements and the like,” he said, when asked about Mr Trump publicly attacking Ms Yovanovitch on Twitter as she testified.

“I don’t have anything else today about the Democrats’ impeachment proceedings.”

Mr Pompeo also declined to directly answer a question on whether he has confidence in Bill Taylor, the current US ambassador to Ukraine, who has also testified in the inquiry.

However, the secretary of state may not be able to stay out of the impeachment inquiry for much longer, after he was named in a closed-door testimony which was made public on Monday.

David Hale, a senior State Department official, told investigators that Mr Pompeo was aware of an alleged smear campaign against Ms Yovanovitch and he apparently called Sean Hannity, a prominent Fox News host, to demand evidence for the accusations against her.

Despite the State Department being unable to find credible evidence against Ms Yovanovitch, according to Mr Hale, no statement of support was issued for the former ambassador. 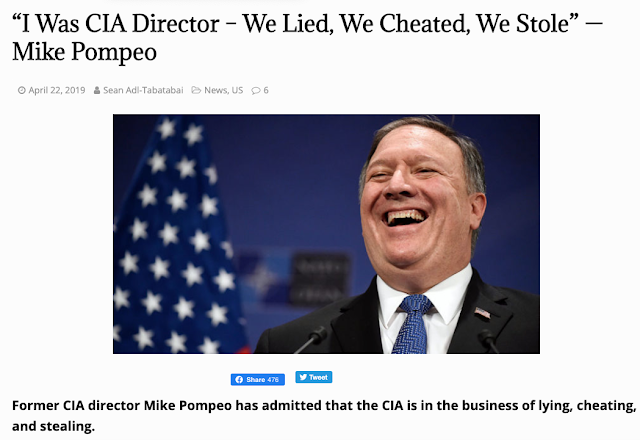 https://newspunch.com/cia-director-lied-cheated-stole-mike-pompeo/?fbclid=IwAR3iQR25i3tIa0YOi-fYWdfPwlUY2Udb3awzTn4iK3ewvrWNCfSQlYdPhHk
Posted by seemorerocks at 11:28

Email ThisBlogThis!Share to TwitterShare to FacebookShare to Pinterest
Labels: Pompeo