Good to see the Empire bringing progress and enlightenment to Bolivia:

"I dream of a #Bolivia free of Indigenous satanic rites, the city is not for 'Indians,' they better go to the highlands or El Chaco," Senator @JeanineAnez said on her Twitter account about her country where more than 65% of the population is Indigenous. #GolpeDeEstadoBolivia 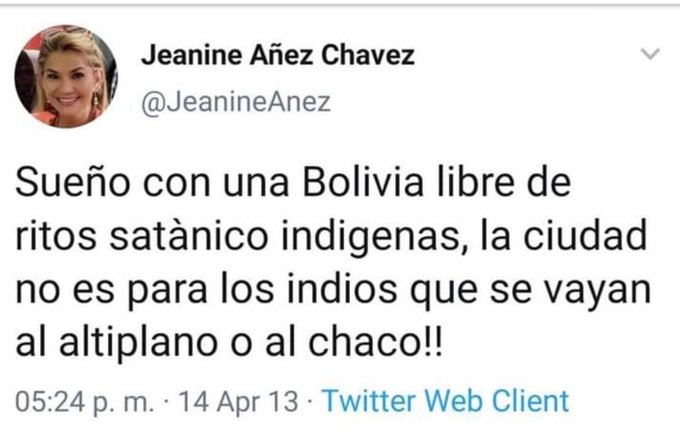 
Indigenous culture is likened to “satanic rites”. This is reminiscent of the US Bureau of Indian Affairs demonizing (and criminalizing) Native Americans Sun Dances and other rituals and celebrations in the late 19th and early 20th century.

Replying to @Seamus_Malek
Bolivia's new interim president has deleted a racist tweet she made only a week ago where she said a group of indigenous Bolivians couldn't actually be indigenous because they were wearing shoes.


278 people are talking about this

Replying to @Seamus_Malek
The new interim president of Bolivia deleted her tweet where she called the indigenous Aymara "satanic".


454 people are talking about this


Nobody expects the Spanish Inquisition. Especially in 2019.

This is what Bolivia's parliament looked like when Senator Jeanine Añez decided to swear herself in as head of state. No majority, no quorum, no vote on whether to accept @evoespueblo's resignation as required by law. No constitutional process. She just took power. That's a #Coup 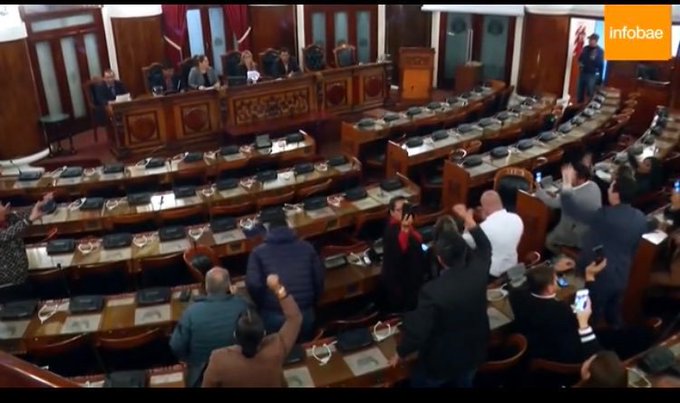 
Makes one wonder, how in the world is it possible to doubt Morales stole the election when the opposition is led by someone who believes 65% of the population performs “satanic rituals” and are not fit to live in cities?

Faux blonde — trying just a little too hard for that Euro look?

Roger Waters has a message!