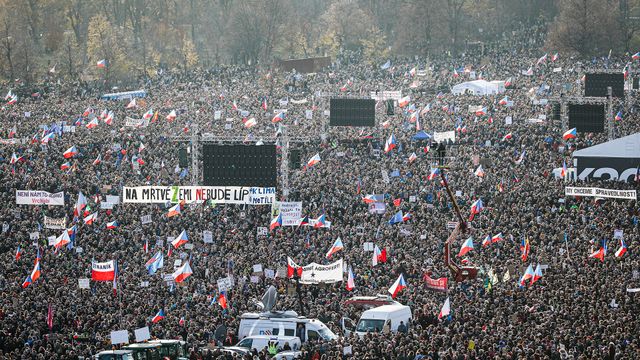 WSWS,
On the eve of the 30th anniversary of the so-called Velvet Revolution, hundreds of thousands demonstrated in the Czech capital of Prague on Saturday against the corrupt right-wing government led by Prime Minister Andrej Babis. According to the police and the protest organisers, some 250,000 people participated.

In June, 300,000 people protested against the government, and recent weeks have witnessed a series of demonstrations with more than 100,000 participants. The protests are primarily directed against Babis, who is accused of abusing his political office for personal and business gains. According to Forbesmagazine, the Czech prime minister’s wealth amounts to an estimated €3.3 billion, making Babis the country’s second richest man. He has been accused of corruption in a number of cases.

The protests on Saturday took place the day before November 17, the date in 1989 when the first protests were held that led to the breakdown of Stalinist rule in Czechoslovakia. A few days later, on November 26, the Stalinist leader Ladislav Adamec and Vaclav Havel met at the negotiating table. By the end of December, Havel was president.

The sustained protests underscore that the restoration of capitalism in the Czech Republic and Eastern Europe has not led to prosperity and democracy, but to glaring levels of social inequality and the rise of a corrupt, authoritarian elite.

Babis personifies this development. He enjoyed close ties to the Stalinist leaders. Several investigations have confirmed that he was active on behalf of the StB intelligence agency. After capitalist restoration in 1989, he used his contacts to establish his business empire. Initially, he made his money with a company in the agricultural and grocery sectors, Agrofert, which now controls some of the country’s major media outlets.

Like many other former Stalinist functionaries in Czechoslovakia and Eastern Europe, Babis transformed himself into a vocal proponent of the capitalist market. The social democratic CSSD and post-Stalinist KSCM, which support Babis along with his ANO movement, are full of former Stalinist officials who benefited personally from the privatisation of public assets.

The Czech Republic in particular saw a rapid sell-off of public companies during the early 1990s. The Democratic Citizens Party (ODS) and the CSSD governed in a variety of alliances and with different coalition partners. But their politics always remained the same. One austerity programme after another was implemented in the interests of the Czech and European ruling elites, who promoted militarism and a repugnant campaign to scapegoat refugees and foreigners.

The major parties experienced a rapid decline. At the last election in 2017, the ODS achieved just 11 percent, while the CSSD got 7 percent of the vote. Babis benefited from this by portraying himself as an alternative to the established parties. ANO won the 2017 election with over 30 percent of the vote. The right-wing is currently deeply divided, while the CSSD has split into bitterly warring factions. The party is experiencing a dramatic drop in membership and could fail to win seats in parliament at the next election.

The protests against Babis express the anger at the entire political establishment that has led the country for the past 30 years. In contrast to the official portrayals of the Czech Republic as a country characterised by low unemployment and rapid economic growth, the reality for the working population is very different. A recent poll revealed that 38 percent of those over 40 believed that they had a better life prior to 1989. Among workers, the figure rose to 52 percent.

The protest organisers have nothing in common with the broad masses of the population. Under conditions of mass protests in countries around the world and growing anger towards traditional parties, they are attempting to contain the protests and channel them in a reactionary direction. Over recent months, a series of strikes and protests expressing the dissatisfaction of broad sections of the population have taken place across Eastern Europe, including in Poland, Serbia and Albania.

The leaders of the “One Million Moments for Democracy” movement have close links to pro-European Union liberal and conservative forces, and aim to pressure the government to adopt a more pro-European course. “We’re not making another revolution or anything like that, we are actually trying to retain what was achieved in 1989,” explained one of the organisers, Benjamin Roll. In their view, the current government’s corruption cuts across the interests of the EU.

The movement is led by the theology student Mikulas Minar. Its declared goal is to steer clear of political parties as much as possible. However, this was exposed as a transparent fraud by a meeting held between leaders of the movement and right-wing politicians, reported by the German daily Frankfurter Allgemeine Zeitung.

While some right-wing and liberal parties have backed the protests, the social democrats, Stalinists, and trade unions have opposed them. The KSCM, in particular, is drawing on the tradition of the Stalinist state party, which suppressed any independent struggle in the population. Following the protests in the summer, the party’s central committee adopted a statement explicitly supporting Babis’ ANO and praising its right-wing agenda. The statement described anti-government protests as the “destabilisation” of the Czech Republic and warned of the influence of “foreign power circles” and a “coup in the interests of right-wing elites.”

This makes clear that workers and young people in the Czech Republic and Eastern Europe confront fundamental questions of political perspective. Three decades of capitalist rule have not led to democracy and an improvement in living standards for the working class, as once promised by the advocates of capitalist restoration.

In reality, it produced a social catastrophe and the rise to power of right-wing, parasitic elements like Babis. The developing working-class movement must oppose these forces with a socialist and internationalist perspective. Arming the emerging struggles with a socialist programme requires the construction of sections of the International Committee of the Fourth International in the Czech Republic and throughout Eastern Europe.
Posted by seemorerocks at 16:19