“The Palace… Threatened Us

This leaked off-air recording of ABC News anchor Amy Robach is much more revealing than anything the BBC is going to air about Andrew Saxe Coburg Gotha.
Buckingham Palace has been “threatening” journalists to bury the story for years – which is all very reminiscent of Jimmy Savile, who was of course, ahem, popular at the Palace. Robach also states they were scared of losing interview access to folically challenged William Saxe Coburg Gotha and his underweight wife. She does not explicitly state that was one of the “threats” Buckingham Palace employed, but it does follow directly as her next observation.
Amy Robach very probably realised this “unguarded” moment would get out to the public, and we should be grateful to her for lifting the lid on how the protection of the crimes of the powerful operates, on a global level. Alan Dershowitz, whom Robach mentions, was not only a Lolita Express passenger, he is the celebrity lawyer who defended the CIA‘s use of torture as legally and morally justified. One might speculate on the psychological parallels of torturing the defenceless and inflicting sex on the young.
There is overwhelming evidence that Virginia Roberts Giuffre was trafficked into the UK by Epstein for sex with Prince Andrew. There are flight logs. There is that compromising photo in Ghislaine Maxwell’s flat. Both are entirely consistent with, and strongly corroborate, Virginia’s own testimony. This instance occurred in the UK.
It ought to be a matter of deep national disgrace that neither Ghislaine Maxwell nor “Prince” Andrew has been questioned over by the Metropolitan Police over this sex trafficking. That Virginia was over 16 is not the issue. She was sex trafficked into the UK and not legally adult. Why is there not a massive media clamour for Scotland Yard to investigate?
Amy Robach has the answer to that question.
Hat Tip to projectveritas 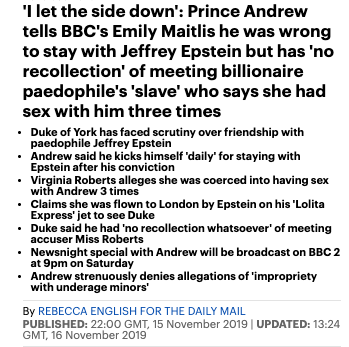 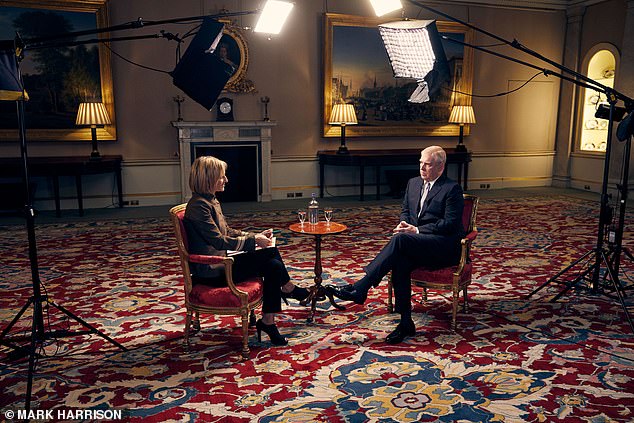 Prince Andrew has admitted he let the Queen and the Royal Family down by becoming involved with a paedophile billionaire.

In a ‘make or break’ TV interview about the scandal, he said he regretted going to stay with Jeffrey Epstein in New York after the financier’s release from prison on child sex offences.

‘The problem was the fact that once he had been convicted I stayed with him.

‘That’s the bit I kick myself for on a daily basis because it was not something that was becoming of a member of the Royal Family and we try and uphold the highest standards and practices and I let the side down, simple as that,’ he told the BBC’s Emily Maitlis.

Andrew also again rejects the claim by one of Epstein’s victims, Virginia Roberts, that he had sex with her when she was 17.

The prince says he does not even remember meeting Miss Roberts, despite the existence of a photograph showing him with his arm around the teenager’s bare waist alongside Epstein’s alleged ‘madam’ Ghislaine Maxwell