A pub owner is among dozens in Otira and Arthur's Pass who could be cut off until Saturday by landslides brought down by foul weather. 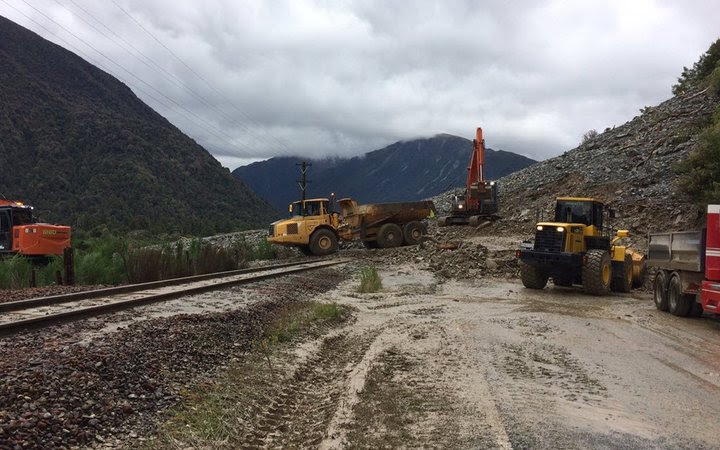 The New Zealand Transport Agency says the most significant slip is just east of Aitkens, where about 20,000 cubic metres of debris is covering the road. Photo: NZTA
Radio NZ,
19 January, 2017

Key highways in the South Island were shut today as heavy rain and fierce winds swept through. The Lewis Pass to Picton has re-opened but State Highway 73 at Arthur's Pass remained closed.
Otira Pub owner Gillian MacDougall said she was ready to evacuate if a slip nearby gave way any further.
However, she said, just where she and others should escape to remained an open question - as further slips over the road to the west and east of Otira meant they were trapped in all directions.
The small alpine settlement was at the centre of the mid-summer weather "bomb low", which has brought heavy rain and winds of up to 170km/h to central parts of the country.
Travellers and locals have been stranded by the slips, as have those in the nearby township of Arthur's Pass. The road was expected to take at least another day to clear.
Otira is home to about 40 people while Arthur's Pass has roughly 30.
Ms MacDougall said while her pub had so far avoided being damaged, a passing ute driver had not been so lucky. 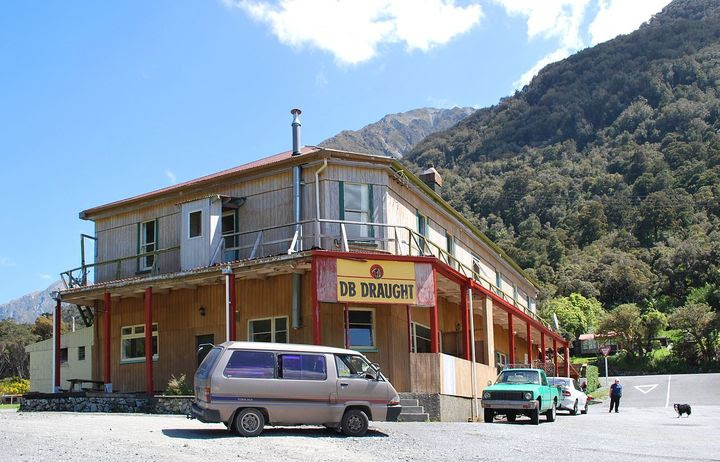 Otira Pub owner Gillian MacDougall says her pub - pictured here on a day of fine weather - is hemmed in on all sides by slips. Photo: Wikimedia Commons
"I woke up because the wind was howling, but when I looked out the window I could see all of these trucks up behind me, and I thought... What is going on?
"What had happened is [he] was driving past along the main road and the slip came down and pushed him off the road."
The driver had escaped unscathed, she said.
Three truck drivers and three campervans carrying tourists were trapped in the pub when the weather hit and they were all getting to know each other rather well, she said.
"They would probably rather have been on the other side before it all happened, because now they're boxed in, aren't they. I think this is when you come together, isn't it. Everyone comes together and has a laugh and talks about what's happened."

Slips could take another day to clear

The New Zealand Transport Agency said contractors had started using heavy machinery to clear the slips on Arthur's Pass, but SH73 was unlikely to re-open before Saturday.
The weather hit hardest through the alpine pass, where creeks and rivers rose rapidly and trees and debris were sent tumbling on to roads.
Regional performance manager Pete Connors said the most significant slip was just east of Aitkens, where about 20,000 cubic metres of debris was covering the road.
"It is significant and the problem is it's where rail is immediately adjacent to the road, so it's not a simple matter of just side-casting the slip - we've got to actually physically remove it."
KiwiRail was unable to use the railway line through the pass at the moment, he said.
Lines crews at work
Meanwhile, electricity lines companies were repairing faults in lines across the lower South Island.
Aurora Energy said it had restored the power to 1100 households and businesses in Dunedin and Central Otago this morning.
Power remained cut to another 400 houses in the Roslyn area of Dunedin.
Powernet in Southland and Network Waitaki in North Otago said they were dealing with dozens of small faults, mainly in coastal areas caused by trees falling on power lines.
They were unsure how many people were affected.
In Wellington, ferry services were back in action as high winds died away and the sun came out.
Trolley buses were back on the roads after being swapped for diesel buses this morning
Posted by seemorerocks at 18:17