Crop failures: and so it starts

Bad weather in Italy and Spain is likely to significantly increase the price of vegetables across northern Europe, food suppliers and supermarkets have told the BBC. 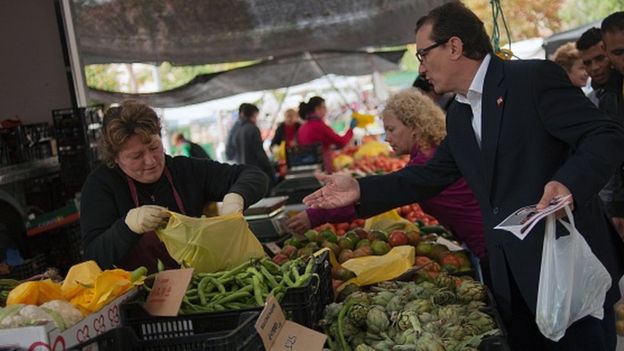 
One supplier said that a combination of flooding, cold weather and poor light levels had created a "perfect storm" of poor growing conditions.

Courgettes and lettuces are likely to be much more pricey, one supplier said.
Poor planting conditions could also affect prices at the end of the year.

Floods in Spain's south-eastern Murcia region combined with cold weather in Italy has meant that many field crops such as lettuce and broccoli have been nearly wiped out, Nationwide Produce food marketing company managing director Tim O'Malle told the BBC.

Peppers and aubergines are among others that have been hit.

Murcia is reported to have recently had its heaviest rainfall in 30 years and is estimated to supply about 80% of Europe's fresh produce during the winter months.

"The situation has got so bad that some vegetable suppliers have taken to importing lettuces from the US, a development that up until now has been pretty much unheard of," Mr O'Malley said.

He said that the recent cold snap had meant that Italy - which normally exports vegetables at this time of the year - is now having to import them.

The damage to the vegetable market is especially worrying for northern European countries like Britain - which even before the shortages imported 50% of its vegetables and 90% of its fruit, Mr O'Malley said.

The price or availability of crops such as tomatoes, cucumbers, courgettes and peppers is likely be affected, Mr O'Malley said, while crops planted before Christmas for harvest in 2017 are also likely to suffer.

Philippe Binard, of Freshfel Europe, a forum based in Brussels that represents the fresh produce industry, told the BBC that the problems afflicting vegetable production were unprecedented, with the yield of courgettes, aubergines, tomatoes, broccoli and peppers from Spain down by about 25%, while prices had risen between 25% and 40%.

"There has been a dramatic loss of production not only in Murcia but also in the Spanish regions of Andalusia and Valencia. All this has come at a time of heavy snowfall in Italy," he said.

A spokesman for the British supermarket Tesco said that the bad weather conditions in Spain had resulted "in a few availability issues".

"But we are working with our suppliers to resolve them as quickly as possible," he said.
Posted by seemorerocks at 13:47