This, of course, comes from Americans scientists and so it is all the fault of Trump and Putin – Killary and the liberal warmongers aree of course is blameless (sic). Six dozen positive feedbacks and a melting Arctic aren’t even on the horizon of this report.

Scientists have moved the minute hand of the symbolic Doomsday Clock 30 seconds closer to midnight for the first time.
Leading scientists, who are the clock's keepers, say the world has edged closer to apocalypse in the past year amid a darkening security landscape and comments by US President Donald Trump. 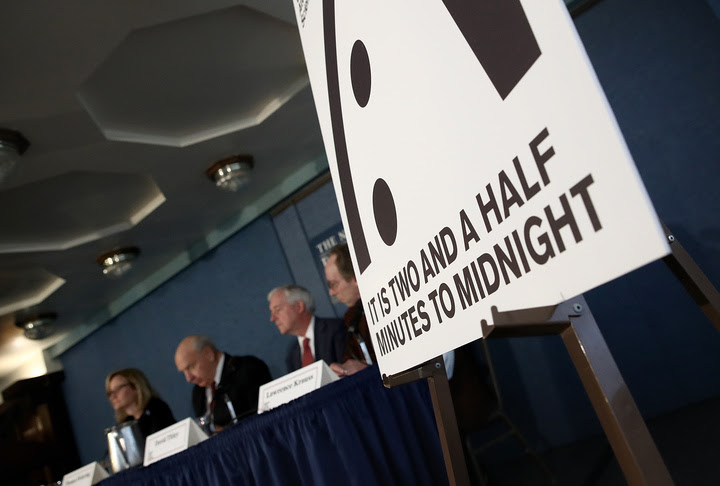 Members of the Bulletin of Atomic Scientists unveil the 2017 time for the "Doomsday Clock"Photo: AFP
The clock now says the world is 2.5 minutes from apocalypse.
Bulletin of the Atomic Scientists (BPA) chief Rachel Bronson urged world leaders to "calm rather than stoke tensions that could lead to war".
In a report, the BPA said Mr Trump's statements on climate change, expanding the US nuclear arsenal and the questioning of intelligence agencies had contributed to the heightened global risk.
It is the closest the clock has come to midnight since 1953, when the minute hand was moved to two minutes away following hydrogen bomb tests by the US and Russia.
The minute hand on the Doomsday Clock is a metaphor for how vulnerable the world is to catastrophe.
The symbolic device was created by the Bulletin of the Atomic Scientists in 1947. The BPA was founded at the University of Chicago in 1945 by a group of scientists who helped develop the first atomic weapons.
Today, the group includes physicists and environmental scientists from around the world, who decide whether to adjust the clock in consultation with the group's Board of Sponsors - which includes 15 Nobel laureates.
'Heightened global risk'
For the last two years, the minute hand of the Doomsday Clock has stayed set at three minutes before the hour. But the BPA says the danger of global disaster is even greater in 2017.
It said: "Disturbing comments about the use and proliferation of nuclear weapons made by Donald Trump, as well as the expressed disbelief in the overwhelming scientific consensus on climate change by both Trump and several of his cabinet appointees, affected the Board's decision, as did the emergence of strident nationalism worldwide."
Other influencing factors listed in the BPA report include doubts over the future of the Iran nuclear deal, threats to cyber security and the rise of fake news.
The board's decision to move the clock less than a full minute - something it has never before done - is because Mr Trump has only recently taken office and many of his cabinet nominations are not installed in government.
When it was created in 1947, the clock's hand stood at seven minutes to midnight. Since then it has changed 22 times, ranging from two minutes to midnight in 1953 to 17 minutes before midnight in 1991.
The clock was last adjusted in 2015 when it was moved from five minutes to three minutes to midnight amid global perils such as climate change and nuclear proliferation.
That was the closest it had been more than 20 years.
It was last at three minutes to in 1984 when US-Soviet relations reached their lowest point.

(ANTIMEDIA) Beijing — Following comments made by White House spokesman Sean Spicer on Monday in which he said the United States would absolutely protect its interests in the South China Sea, the Asian superpower has fired back through its state-run media — going so far as to suggest China should beef up its nuclear arsenal in the face of Donald Trump’s presidency.

As reported by the newswire service Agence-France Presse (AFP) on Tuesday,
“In recent days, Chinese social media has carried pictures purporting to show an advanced intercontinental ballistic missile system deployed in the Northeast.”

That missile system, the Dongfeng-41, was described by China’s state-run Global Times in a Tuesday editorial as “a nuclear solid-fuel road-mobile” system with “a range of 14,000 kilometers and a payload of 10-12 nuclear warheads”that can “target anywhere in the world” and is “widely considered one the most advanced intercontinental ballistic missiles.”

As AFP notes, the Times itself suggested the images of the Dongfeng-41 may have been leaked to social media by the Chinese military, the People’s Liberation Army, as a warning shot at Donald Trump.

On Monday, White House spokesman Sean Spicer appeared to echo the line taken by Rex Tillerson, Trump’s choice for secretary of state. At his recent Senate confirmation hearing, Tillerson raised eyebrows when he suggested the United States  block China from accessing its artificial islands in the South China Sea.

Saying “The U.S. is going to make sure that we protect our interests there,” Spicer went on to state:

“It’s a question of if those islands are in international waters and not part of China proper, then yeah, we’re going to make sure that we defend international territories from being taken over by one country.”

In response, China’s foreign ministry gave a statement in which it reiterated its unchanging position on its claims of sovereignty. Calling those claims “irrefutable,” spokeswoman Hua Chunying said
“the United States is not a party to the South China Sea dispute” and that China wants the U.S. to “respect the facts, speak and act cautiously to avoid harming the peace and stability of the South China Sea.”

In response, China’s foreign ministry gave a statement in which it reiterated its unchanging position on its claims of sovereignty. Calling those claims “irrefutable,” spokeswoman Hua Chunying said