Steve Bannon - looking beyond the slurs 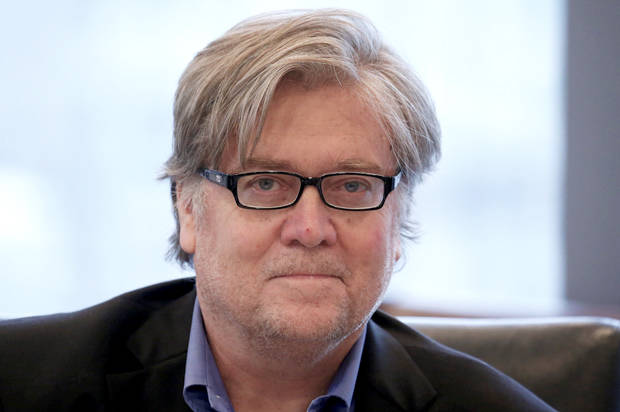 We live in an era where anyone who presents a position that one doesn’t like it is denoucned as “false news” or “alternate facts” is the latest.

In recent days Trumps’advisor, the “man behind the throne” has made headlines in the media for his remarks in an interview with the New York Times. 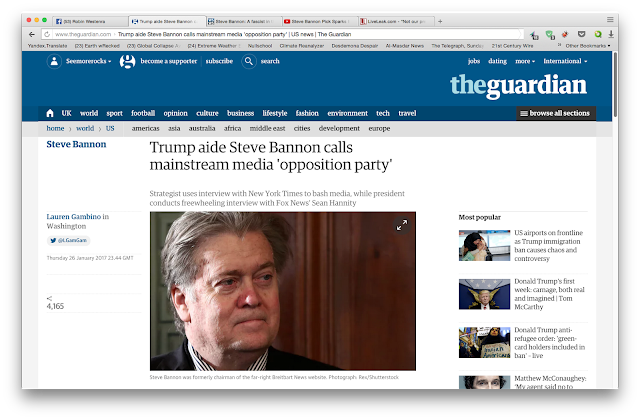 I am suspicious of "news"from the liberal media that cannot mention Bannon's name without tying it to labels like fascist, white supremicist, anti-semitic - as if we can't make up our own minds based on listening to the actual words.

If we weren't told what to think perhaps we might raw the 'wrong' conclusions.

The battle between Donald Trump and the press escalated Thursday after one of Trump’s top advisors called the media the opposition party. In a rare interview with the New York Times Trump's Chief Strategist Steve Bannon said, “The media should be embarrassed and humiliated and keep its mouth shut and just listen for a while." Bannon, the former head of Breitbart News, added, "I want you to quote this. The media here is the opposition party. They don’t understand this country. They still do not understand why Donald Trump is the president of the United States.” We speak to reporter Sarah Posner who interviewed Bannon in July. In August she wrote a headline grabbing article for Mother Jones about Steve Bannon titled "How Donald Trump’s New Campaign Chief Created an Online Haven for White Nationalists."

We are seeing talk of legislation beeing passed ("the Pravda Act) to change the school curriculum in California to teach schoolchildren that Putin and "Russian hacking" were the reason the Dems lost he election.

The socialist (Trotskyist?) publication WSWS characterises Bannon in this way:

Bannon is a fascist, and fully warrants the label.... His online rag Breitbart News serves as a platform for white nationalists, anti-Semites, and the so-called “alt-right.” He is a person who manages, with his own biography, to combine nearly all the reactionary trends in American political, economic and social life.

As a scandalmonger and inciter of racial hatred, Bannon recalls no historical figure so much as Nazi propagandist Julius Streicher,  and Breitbart News as “acting like Der Stürmer in Germany in the 1930s more than actually a legitimate conservative media outlet.”

Here is from the liberal ABC News


Steve Bannon: A fascist in the White House

The appointment of a fascist scandalmonger to serve as the president’s chief strategist epitomizes the “gutter to West Wing pipeline” that is funneling racist, far-right, and religious fundamentalist figures into senior positions in the Trump administration.


Here are some items that in my mind are a bit more balanced from the Duran (and RT’s) Peter Lavelle.

All it says to me is that before throwing epithets around we should be a bit more careful. Otherwise we might believe what we are told by the Guardian and others how Russian hacking is behind America’s problems and Vladimir Putin is behind every problem of the West.

My advice might be to do your own research and listen to what people are actually saying – and, above all, avoid the comments sections.

Steve Bannon speaks out against the media

When the liberal left media demonizes someone, it usually mean they are a patriot.

He is being called an anti-semit, misogynist, racist, bigot, neo-nazi, and just about everything else you would expect the Hillary Clinton left of accusing anyone who is #NotWithHer.

The truth about Steve Bannon is very far from what the media is describing, and that is why we urge you to view the video from TheRebel.media to get a clearer picture about the man who helped Trump win the US Presidency, and will be by his side as he enters the White House.

What we are seeing with a Trump presidency is, on the one hand, maybe, just maybe a retreat back from war with Russia and ugly measures that are will accentuate the deluded ideas of “making America great again” by attacking the Other, like immigrants.

It would be delusional, in my mind to expect anything other than disaster. Trump WILL be the worst president in US history.


But the United States was already fascist before Donald Trump, so it’s a bit rich to tar only the one side of this conflict with the fascist epithet.