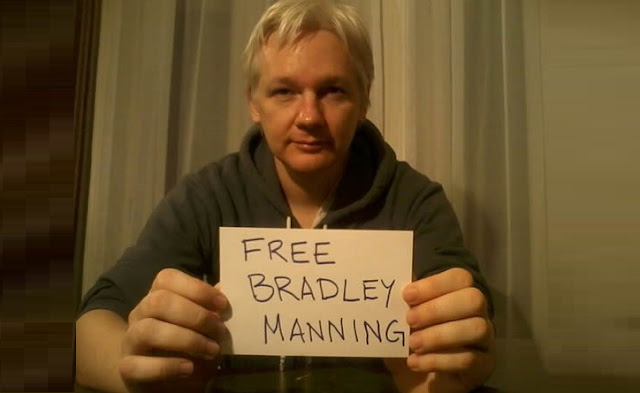 Five days ago, Wikileaks' Founder Julian Assange agreed to US extradition if Chelsea Manning was granted clemency by President Obama...

This evening we got confirmation that Obama has indeed granted Manning clemency.

By way of background, we noted previously, Assange has been living in the Ecuadoran embassy in London since June 2012 to avoid extradition to Sweden to face sexual assault allegations. The Australian former computer hacker said he fears Stockholm will in turn extradite him to the US, where he angered Washington over WikiLeaks' publication of thousands of US military and diplomatic documents leaked by former US soldier Manning. The full details of which can be found here...


"I have been detained illegally, without charge for six years, without sunlight, lots of spies everywhere. It's tough... but that's the mission I set myself on. I understand the kind of game that's being played - big powerful actors will try and take revenge...it's a different thing for my family - I have young children, under 10 years old, they didn't sign up for that... and I think that is fundamentally unjust... my family is innocent, they didn't sign up for that fight."

And it is clear from the initial response from Wikileaks that Assange's biggest fear - and perhaps rightly so - was receiving a fair trial under an Obama/Lynch justice system...

WikiLeaksVerified account‏@wikileaks
Assange: "Thank you to everyone who campaigned for Chelsea Manning's clemency. Your courage & determination made the impossible possible."
11:29 AM - 18 Jan 2017
Followed by a full statement.
Statement from Mr. Julian Assange


I welcome President Obama's decision to commute the sentence of Ms. Chelsea Manning from 35 years to time served, but Ms. Manning should never have been convicted in the first place. Ms. Manning is a hero, whose bravery should have been applauded not condemned. Journalists, publishers, and their sources serve the public interest and promote democracy by distributing authentic information on key matters such as human rights abuses, and illegal acts by government officials. They should not be prosecuted. In order for democracy and the rule of law to thrive, the Government should immediately end its war on whistleblowers and publishers, such as Wikileaks and myself.


Mr. Assange welcomes President Obama's decision to commute Chelsea Manning's sentence.Whistleblowers like Chelsea Manning serve the public interest. She should never have been prosecuted and sentenced to decades in prison. She should be released immediately. Likewise, publishers of truthful information serve the public interest, promote democracy, and should not be prosecuted. The war on whistleblowers should end now and should not be continued in the new Administration. For many months, I have asked the DOJ to clarify Mr. Assange's status. I hope it will soon. The Department of Justice should not pursue any charges against Mr. Assange based on his publication of truthful information and should close its criminal investigation of him immediately."

So, to sum up, it appears that US extradition is on the cards for Julian Assange as he is "confident" of a fair trial under President Trump - a very different situation to Obama's Justice Department which "prevented a fair jury."
We wish him luck.