In what reads like an apocalyptic fiction, the Climate Change Projections and Implications for Northland report warns that the region would also be hit with an increased risk of salmonella, dengue fever and Ross River virus and a threat to some crops, with some effects visible by 2050.

Commissioned by Northland Regional Council, Niwa climate scientist Petra Pearce and her team note that Northland's 25 annual days of recorded temperatures of more than 25C would increase to 100 days.

Niwa reported last week that Whangarei was the warmest NZ area in 2016, with a mean average temperature of 16.9C, making Northland the warmest region for the fifth year running.

The localised report was calculated regionally from global data, taken from a number of Intergovernmental Panel on Climate Change (IPCC) reports, using historical climate data from 1986.

It considered four scenarios from the removal of emissions to the extreme "business as usual" scenarios until 2040 and 2090, Pearce told the Advocate.

"What stood out as the major change in Northland, was the increase in temperature ... higher than all other regions," she said. Northland could see more floods and storm damage such as this at Lemons Hill in 2014.

However, winter would see a 0.7C to 3C temperature rise, 6 per cent less to 1 per cent more rainfall in Kaitaia and 1-9 per cent less rainfall in Whangarei.
Pearce said the projections depended on the uncertain future global emissions and were not be taken as definitive.
Stormy weather would increase in intensity with more thunderstorms and wind with ex-tropical cyclones likely be stronger and cause more damage as a result of heavy rain and strong winds.
An increase of 7 per cent in drought frequency was also projected from 2030 and 2050, and up 10 per cent from 2070 to 2090, compared to 1980-1999 levels.
Pearce said the region could also experience an increase in the occurrence of summer water-borne and food-borne diseases such as salmonella, with an increased risk from vector-borne diseases [transmitted by bites] such as dengue fever and the Ross River virus.
Climate change would also result in an increased biosecurity risk from invasive pests, which would impact pasture and horticultural crops. Existing pests were at risk of becoming serious problems with even a slight increase in temperature. 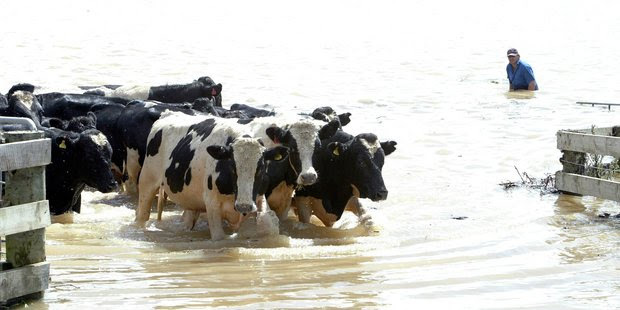 The production of some fruit, such as kiwifruit, would no longer be viable by 2050 because of a lack of winter chilling with warmer temperatures, a longer growing season and rare frosts would require new sub-tropical crops, such as persimmon or macadamia.
Kerikeri grower David Kelly said growers would find ways to thrive, in spite of climate change, thanks to the Zespri-funded breeding programmes at Plant and Food Research in Kerikeri.
"Under the Niwa timeframe, it is doable to produce plants in 15 to 20 years which would withstand temperature changes."
He added that there was room for more irrigation innovation.
Meanwhile, Northland's sea levels would reflect the national projection with New Zealand tide records showing an average rise in relative mean sea level of 1.7mm per year over the 20th century.
The report said coastal roads and infrastructure would face increased risk from coastal erosion and inundation, increased storminess and sea-level rise.

You can also read the Ministry for the Environment's summary here.

People run out of water around Hastings as aquifer level drops The low water level in the Heretaunga aquifer is making itself felt outside of Hastings.

Residents and businesses not connected to the town water supply are finding their bores and pumps unable to access the groundwater.

Harris Pumps & Filtration co-owner Michael Harris said he has had several callouts in the past week or so to the southern Riverslea, York, Tollemache and Maraekakaho Rd areas from people whose pump systems are struggling.

"It depends on their location, but for many there are pumps getting airlocked.

"The water is still there and may be dropping off by only a metre, but because a lot of those were original artesian pump systems designed around that, with the water table dropping, we are having to alter the pipework and in some cases put in different systems."

In addition, a lot of pumps were hooked on top of the well, which let in air and stopped the pump.

For some people the solution was to put an extra pipe down inside the bore to reach the water - others needed their pumps replaced.

He said problems started arising last week, and yesterday he took about 10 calls in the morning from residents whose houses had run out of water overnight.

"Most people are pretty understanding, although the people with businesses attached to that supply are a bit more stressed and we are trying to prioritise the work for them."

One person they had dealt with who had an irrigation bore had had to turn it off, he said.

He said his company had been in business about 50 years and this year's situation was unusual.

One business owner, Jimmy Macken, of Bareknuckle Backyard BBQ on Riverslea Rd, said he had to call for assistance when a pump developed an airlock.

"We got them to come urgently because we are a commercial operation. We had no staff working through the morning until the situation was sorted, we can't run a kitchen without water."

He said it was fortunate the water pump didn't burn out, as some others had, and all it needed was a pipe put down the well five metres deeper than it had been.

Apart from staff not coming in for part of the day he said the business wasn't affected.

"I have no issues with it, where we live it's part of the deal."

"We have had quite a number of bores we record showing record lows for the month of December.

"It comes down to a lack of rain to recharge the aquifer system."

He said the Heretaunga aquifer was mainly recharged by the Ngaruroro River and it was hoped rain in the hills in the next week or so would replenish it.

The dry weather also meant a lot of irrigators were working, but as long as they were complying with their consent conditions the regional council had no power to stop them, Mr Lilburn said.

"If we do not get rain in the next seven to 10 days things are going to look quite serious as far as flows in the Ngaruroro River go.

"What's quite concerning is that these conditions are normally experienced in February so it's all a bit ahead of normal."

As of yesterday, MetService was predicting nothing more than a few showers through to next Saturday.

Yes, it's snowing in the middle of summer 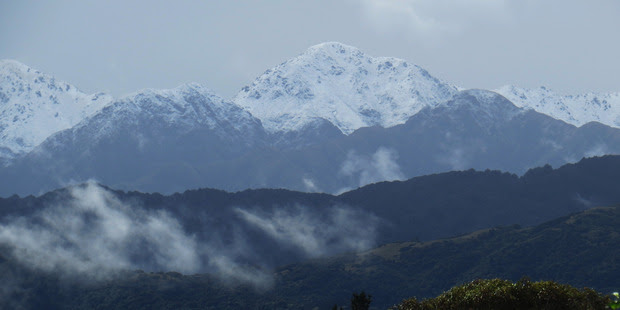 Whakapapa ski field was this morning blanketed in a fresh coating of snow and even the Tararua Ranges behind Levin were white after an overnight dusting.
Much of the lower North Island was covered by cloud this morning, but forecasters say the temperatures dived low enough for snow flurries on the tops of the inland mountain range.
Horowhenua woke to picture postcard views of snow on the Tararua Ranges. 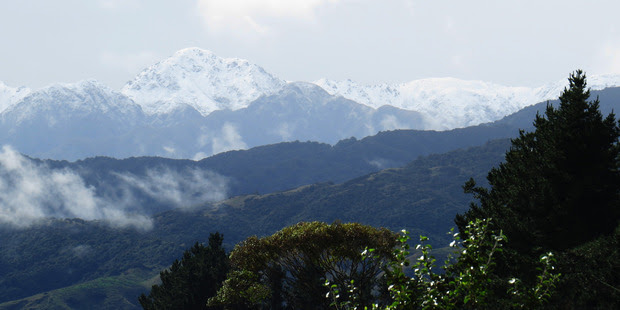 Cheryl Johnstone said she had taken photos in December 2004 of snow on the hills, while Bex Bang said there had been snow in February a couple of years ago.
Pam Kearns remembered a time some years ago when she and her husband gave their sons a swimming pool for Christmas, with strict instructions that, despite it being installed beforehand, they could only have their first swim on Christmas day.
"There was snow on Christmas Day in the hills and it was freezing," she said.
"They still went in for their swim though."
While this year's snow has brought a chilly air to the Horowhenua, temperatures look set to improve, with Metservice forecasting highs of 20 and 21 degrees Celsius for the district early next week 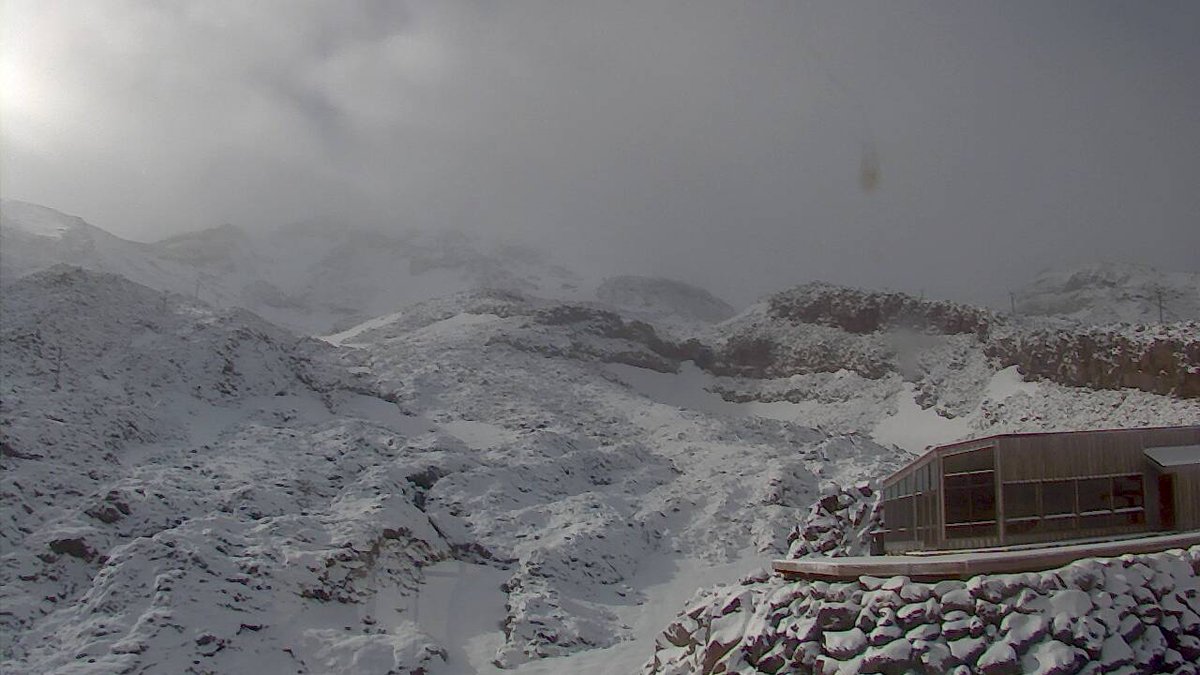 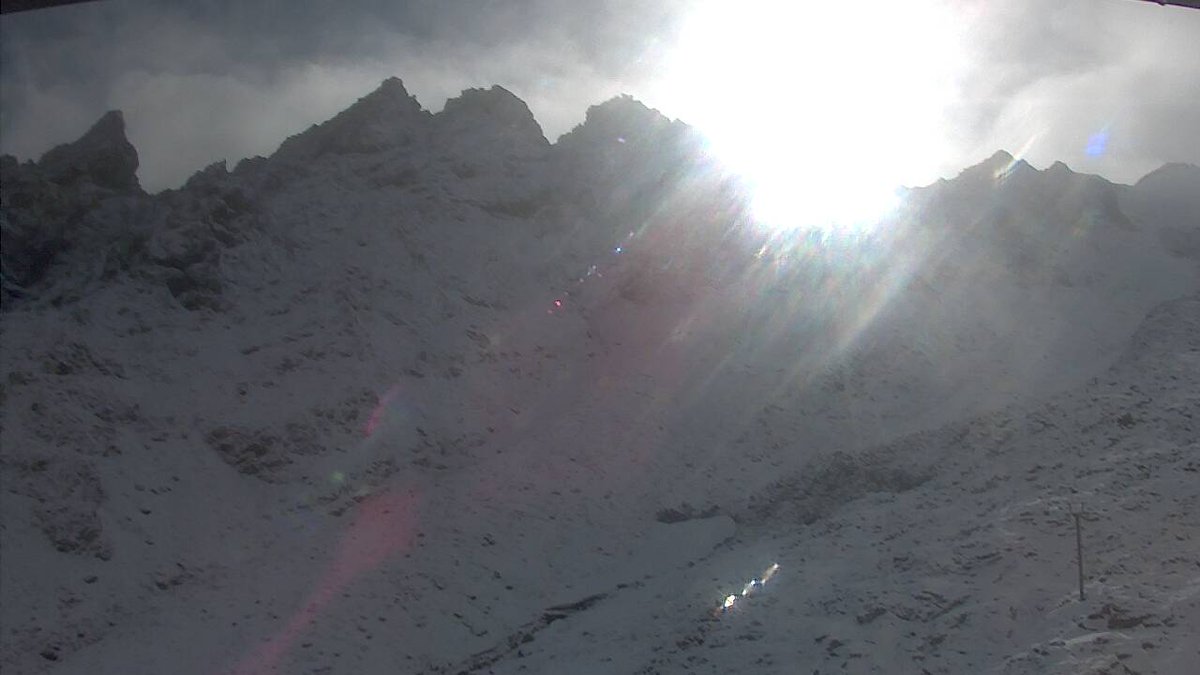 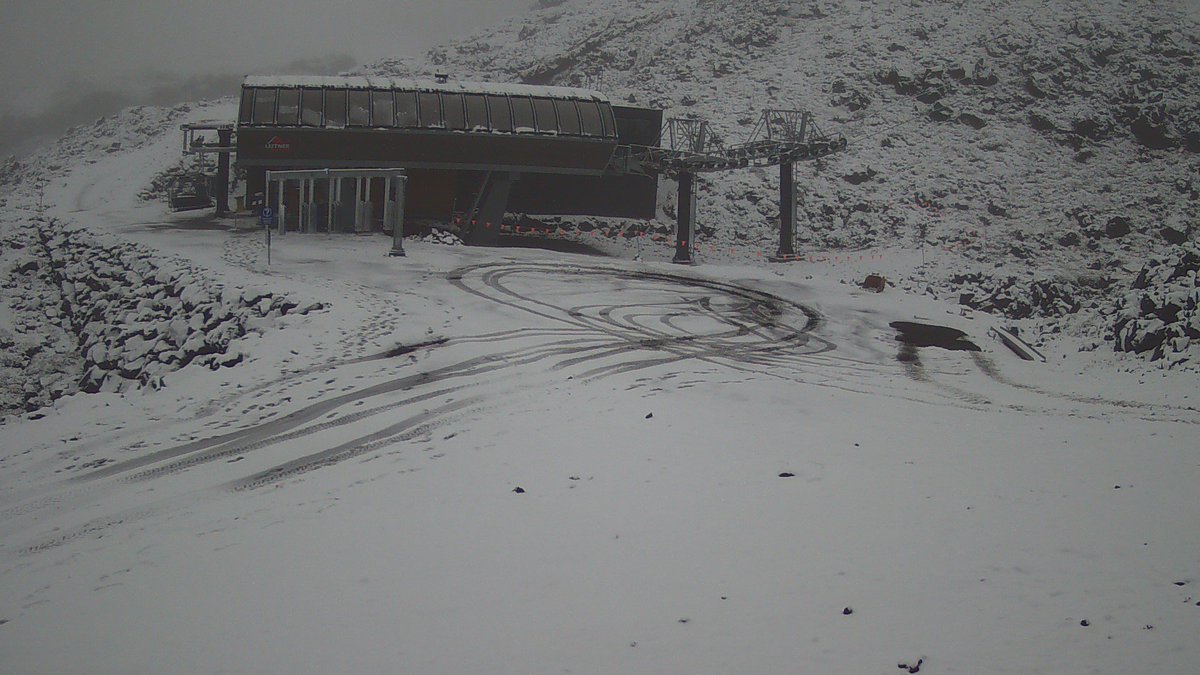 8:35 AM - 20 Jan 2017
Yesterday snow fell on the Southern Alps as a weather bomb unleashed its fury across southern and central New Zealand.
MetService forecaster Tuporo Marsters said the deep low had been followed by a cool southwesterly, which meant conditions were ripe to dump snow on higher parts of the country.
Marsters said it was unusual for snow to fall in the middle of January.
"It's amazing. It's definitely a novelty.
"If you've timed it right to go up the mountain it will be an added bonus."
Just a few weeks ago snow was down to 1300m in the Ruahine Ranges.
Marsters said the worst of the weather was clearing the country so the snow would not stick around very long.

Thousands of properties are without power in South Australia, with Adelaide being the hardest hit, after a storm front crossed the state last night.

A line of thunderstorms moved across South Australia, dumping heavy rain including 58 millimetres at Leigh Creek, 49mm at Little Para Reservoir, 45mm at Edinburgh and 38mm at Wudinna.

Strong winds were also recorded, with a wind gust of 111 kilometres per hour at Adelaide Airport, while there were also 72 lightning strikes in two hours.

Some traffic lights in the city were not working this morning.

Police were directing traffic at Glynde Corner as thousands of Tour Down Under Challenge riders tested their cardio skills, ahead of the professional race later today.

Trees have fallen on powerlines, cars and houses across the city. Some businesses have not opened because they are without power.

SA Power Networks spokesman Paul Roberts said many people would be without power for an extended period.

He said the storm had caused widespread issues and crews were working frantically to restore supplies.

"We had 72,000 lightning strikes between 7:00pm and 9:00pm in South Australia, there's been a significant damage to the electricity network, particularly for metropolitan area customers," Mr Roberts said.

He said Adelaide was hardest hit but power had gone off across the Yorke and Eyre peninsulas and in the Mid North.

The storm has been one of many in recent months that has caused electricity issues.

"We're really getting unprecedented weather, people who have been working for 35 years in SA Power Networks say they've never seen this number of storms, this intensity of storms and this frequency of storms," Mr Roberts said.

"It's been crazy since July and I hope people understand it is weather related."

"Trees or tree branches falling onto roads and cars or you know, leaning against roofs, as well as a bit of water sort of damage," Mr Baker said.

Bureau of Meteorology forecaster Julie Guerin said the rain would make its way through the Riverland this morning and move into the eastern states.

"Conditions still fairly awful up the top of the hills," she said, just before 7:00am.

"I came down the freeway from Crafers and it was a bit of a pea soup up here ... visibility is very low, the roads very slippery, a lot of debris on the roads.

"So if you are driving through the hills and coming down from there take it very easy."


There is still a severe thunderstorm warning for parts of the North West Pastoral and North East Pastoral districts.
Posted by seemorerocks at 14:14