I could say more about this:

Double standards never seem to go away. It seems to be fine for large numbers of people to bomb Muslims back to the Stone Age while being affront that they are trapped in airports. I'm not defending Trump or saying that this is not an abominable action but isn't the bombing (creating the refugee problem)?

It's like once we've bombed them (in a "humane way" as opposed to those evil Russians) we'd better be nice humanitarians and take them in as refugees.

"See the Game? Funny, now the people who orchestrate the wars in Muslim majority countries now duplicitously defend Muslim rights in the US."


‘Let them in’: Hundreds protest at JFK airport after Trump’s ‘Muslim ban’

A spontaneous protest has engulfed New York City’s JFK airport after a number of immigrants, including US green card holders, were detained there Saturday, on the back of travel restrictions introduced by President Donald Trump.

Trump’s executive order on Friday banned citizens from six Muslim majority countries from entering the US for at least the next 90 days unless they possess a diplomatic visa, and barred refugees from Syria indefinitely.


At least 12 immigrants were reportedly detained at JFK airport on foot of the ban prompting activists to quickly organize a protest calling for the release of  those refused entry into the country.

Iraqi translator and former interpreter for the US army during the 2003 invasion of Iraq Hameed Khalid Darwees, was one of those detained, but was released after his lawyers petitioned a federal court

Iraqi refugee translator Hameed Darweesh just released because you demanded it! 11 more to go! #RefugeesWelcome no #RefugeeBan
7:00 AM - 29 Jan 2017

Head to JFK and join the protest. Raise your voices, America. It might be you next. #NoMuslimBanJFK

Protest at JFK growing by the second.

Other travelers affected by the ban were reportedly blocked from boarding flights to the US or turned back on arrival as Trump’s order was promptly implemented.


Symbolic war broke out between the Judicial and Executive branches shortly before 9pm on Saturday evening, when federal judge Ann Donnelly in the Eastern District of New York in Brooklyn issued an emergency stay halting Trump's executive order banning immigrants from seven mostly Muslim nations entering the US, and temporarily letting people who landed in U.S. with valid visa to remain on US territory, saying removing the refugees could cause "irreparable harm". 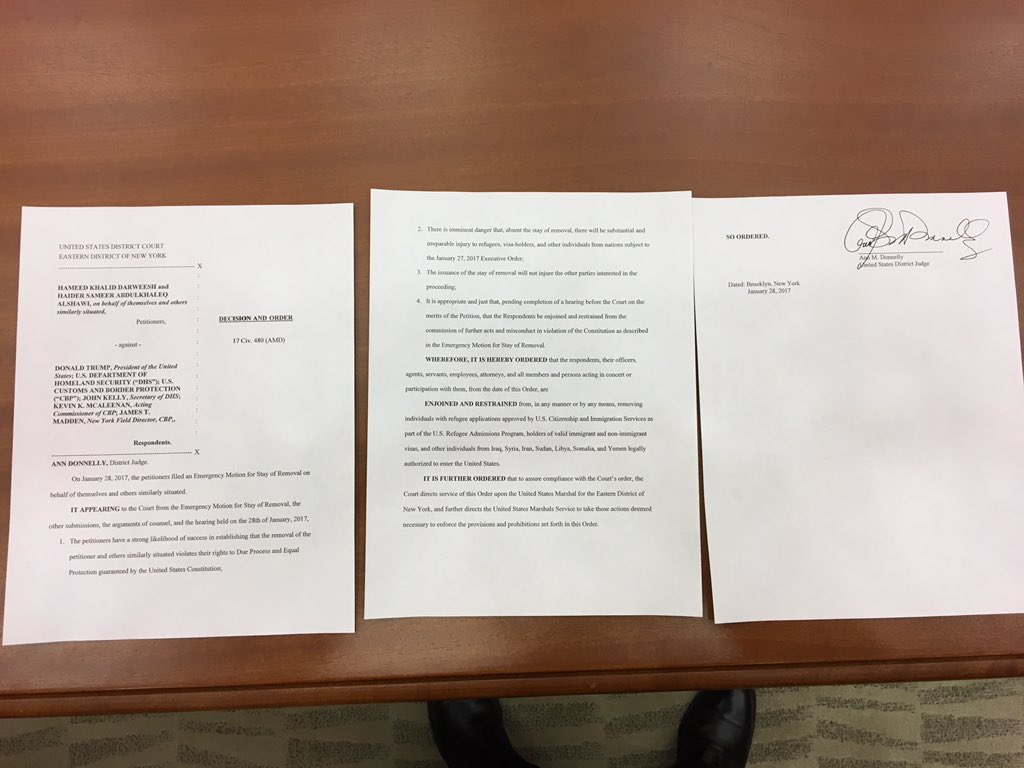 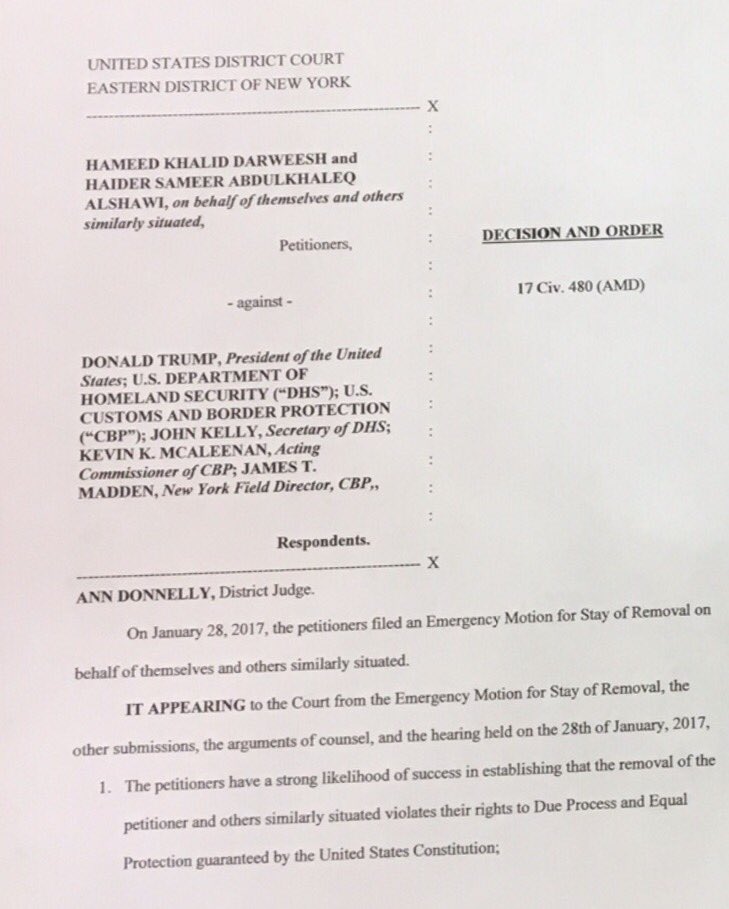 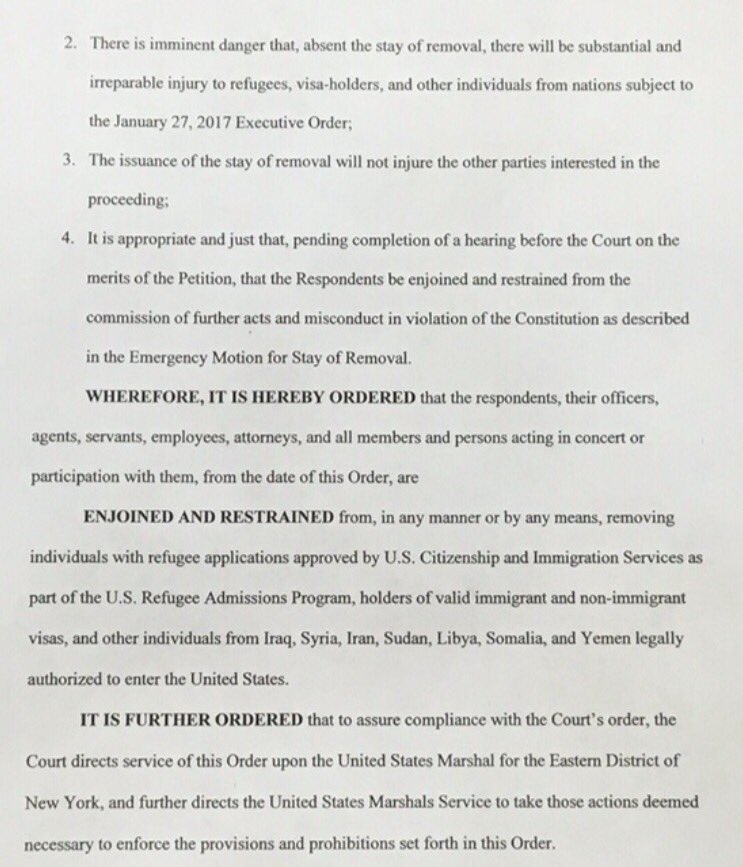 The court's ruling was in response to a petition filed on Saturday morning by the ACLU on behalf of the two Iraqi men who were initially detained at JFK International Airport on Friday night after Trump's ban, and were subsequently granted entry into the US.


The ACLU issued the following statement following the court ruling:
A federal judge tonight granted the American Civil Liberties Union’s request for a nationwide temporary injunction that will block the deportation of all people stranded in U.S. airports under President Trump’s new Muslim ban. The ACLU and other legal organizations filed a lawsuit on behalf of individuals subject to President Trump's Muslim ban. The lead plaintiffs have been detained by the U.S. government and threatened with deportation even though they have valid visas to enter the United States.

“This ruling preserves the status quo and ensures that people who have been granted permission to be in this country are not illegally removed off U.S. soil.”

ACLU Executive Director Anthony D. Romero, had this reaction to the ruling:

“Clearly the judge understood the possibility for irreparable harm to hundreds of immigrants and lawful visitors to this country. Our courts today worked as they should as bulwarks against government abuse or unconstitutional policies and orders. On week one, Donald Trump suffered his first loss in court.

However, while some media reports present the court ruling as a wholesale victory over Trump's order, the stay only covers the airport detainees and those currently in transit, and it does not change the ban going forward.


In summary, the state of affairs as of this moment is that the executive order is now frozen for the next few days, until the case can be briefed. The court has ruled that no one who is currently being held can be sent back to their country of origin, but it remains unclear if they will be released is unclear.
Judge Donnelly has ordered the federal government to provide a list of all people currently held in detention. Where the stay falls short is that according to the ACLU's lawyer, there still can be no new arrivals from countries under the ban, but the ACLU and other organizations are working to file additional suits to roll back other portions of the order.

* * *
A detailed read of Judge Donnelly's ruling, per Josh Blackman, reveals that the order states that petitioners have shown a “strong likelihood of success” and that their removal would violate the Due Process and Equal Protection clause, and cause irreparable injury. (Note, this order only applies to those already in the country, and thus protected by the Constitution; the same analysis does not apply to those outside the United States).

As a result, the court issues what is effectively a nationwide stay, enjoining all of the named respondents, including President Trump, Secretary Kelly, and the acting director of the CBP, from the “commission of further acts and misconduct  in violation of the Constitution as described in the Emergency Motion for Stay of Removal.”

The key part is what they are enjoined from doing:


ENJOINED AND RESTRAINED from, in any manner or by any means, removing individuals with refugee applications approved by U.S. Citizenship and Immigration Services as part of the U.S. Refugee Admissions Program, holders of valid immigrant and non-immigrant visas, and other individuals from Iraq, Syria, Iran, Sudan, Libya, Somalia, and Yemen, legally authorized to enter the United States.

Further, the court orders the Marshal for the Eastern District of New York to “take those actions deemed necessary to enforce the provisions and prohibitions set forth in this Order.”

What will disappoint civil rights advocates, is that this opinion only affects the small number of people who were in-transit when the order was issued, and arrived after it went into effect. The Constitution attaches to their status, and they cannot be held in violation of the Due Process Clause. The same analysis does not apply to aliens outside the United States.
* * *


We now look forward to Trump's reaction to this act of defiance by a US Court which has partially - and painfully - voided his most controversial executive order to date, and whether the Supreme Court will be forced to opine on this most divisive of topics in the coming days. If anything, the risk to the latter may accelerate the prompt appointment of a conservative SCOTUS judge to fill the vacant Scalia spot.
Posted by seemorerocks at 20:10